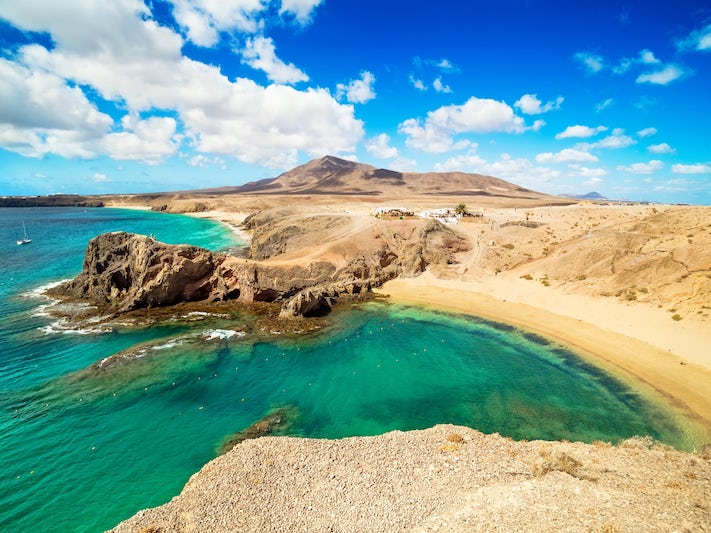 Find Things to Do in Lanzarote on Viator

Popular Things to Do in Lanzarote

Food and Drink in Lanzarote

Since Arrecife is not the center of tourism on the island, the widest choice of restaurants is not in the town itself either. Puerto del Carmen again steals the show, with El Tomate (Calle los Jameos), open daily, 7.00 p.m. - 10.30 p.m. Next door, Tomatissimo with international cuisine is now well into its third decade (open daily from 6:00 p.m. to 11:00 p.m.). El Cangrejo Rojo (Calle Roque Nublo; open daily at noon until 11.30 p.m) specializes in both local and international dishes, as does Casa Roja (Avenida Varadero).

If the idea of a drink or meal just before heading back to the ship sounds like a good idea, get back across the bridge over Charco and check the offerings of restaurants and bars on the eastern side of the inlet. You are likely to bump into fellow passengers from your ship here. As there are no shelters against the sun at the stop where the shuttle bus goes from, recharging the batteries before what can be a wait in searing heat may indeed be a good idea.

Shore Excursions
Mountain of Fire takes you through a barren landscape of lava. Guides will throw grass into the holes in the ground and it soon catches fire from the heat. The volcano that once destroyed life and property on the island is merely dormant today. Vineyards, surrounded by stone walls, dot the landscape. Approximately 4 hours.

Camel Ride and Fire Mountain combines the previous with half an hour's journey over volcanic dunes near the Timanfaya National Park. You'll be seated in a chair, one on each side of each beast; no previous experience is required here. Approximately 4.5 hours.

Jameos del Agua will take you to a volcanic cavern and subterranean water garden on the northern side of the island. A "concert cave" with seats for 600 and a cactus garden with 1,400 varieties on the spiky theme are featured here, all thanks to the artist Cesar Manrique that created the spectacle. Requires walking, duration about 4 hours.

In Arrecife itself, you can visit Castillo San Gabriel, a fort dating back to 1590 and now home to the islands Ethnographic Museum. Castillo San Jose, by Puerto Marmolesat, the outer fringes the town, was built to repel pirates and alleviate poverty on the island in the wake of the major volcanic eruptions. As a result it became known as the "Fortress of Hunger." It now houses a restaurant, designed by Cesar Manrique, as well as Museum of International and Contemporary Art.

The main natural attraction of the island is the Timanfaya National Park and Montanas de Fuego (Fire Mountains). The streams of lava that covered 200 sq km have a striking appearance of petrified rivers. Once you ascend into the mountains, there are more than 300 volcanic craters. Islote de Hilario is one of the hottest parts of the islands, with ground temperature of 140C and only 20 cm beneath the surface. You will be shown how cold water poured into the ground turns at once into steam. Likewise, branches or straw placed on a hot spot first smoulder and then burst into flames. You may also ride a camel here -- but luckily, wicker basket chairs are slung over each side of the animal. The park is open each day from 9 a.m. - 5 p.m.

Further south on the west coat is Janubio, a large circular lake located close to the shore. For a long time, it was used as a source for salt, which was obtained by evaporation. Today, only brine is produced, and the area has become a favorite hunt for bird watchers.

A lagoon called El Golfo is known for its yellow green color, and scientists are unsure why the water has that color. Some contribute this to algae, while others suggest that the green olivine, a semi-precious stone found in large quantities here, is the reason. Caves and galleries of Jameos del Agua lay at the foot of Monte de la Corona, one of the many volcanoes on the island. Cesar Manrique, the artist, turned the caves into galleries and today they feature a 600-seat auditorium, plus restaurants, cafes and a museum of volcanism. The Cesar Manrique Foundation, located in Tachice, honors the life of the artist (1919 - 1992) and features work by the artist himself, plus his collection of works by Picasso, Miro and Klee.

If shopping is what you want to focus on, just make your way to Arrecife's Calle Leon y Castila and you can start making use of your credit card. Lanzarote, together with the rest of the Canary Islands, are duty free, which means that cigarettes, alcohol and electrical goods are offered at attractive prices. Traditional crafts like embroidery and wood carving cater to those with a more traditional taste. Shoes and clothing are also sold in many shops, ranging from smaller brand-specific boutiques to large stores like Zara.

Also, please note that shops are not open on Sundays in Arrecife, though that does not necessarily apply to Playa del Carmen.

If volcanoes and caves are not for you, then an obvious choice could be to head for one of the many beaches. Playa del Reducto is located in Arrecife about two miles to the west from the shuttle buses' drop-off point. Avenida Fred. Olsen, the seafront street, is busy with traffic, but the beach is wide enough so you can escape the noise. Cafes and restaurants along the street will come in handy when you start feeling peckish. Playa Honda is located just south of the town; Playa Papagayo and Playa Blanca at the southernmost tip of the island provide both sand and rocky headlands. Your list of choices also include the busy report areas of Playa del Carmen and Costa Teguise.

If golf is your game, then head to Teguise Golf Club (tel: 928-590512) on Costa Teguise, while windsurfers can enjoy their sport at Playa Matadora and Playa Cucharas. In case you would like to have a game of tennis, then Centro Deportivo los Fariones at Puerto del Carmen, which offers five courts, is an option (tel: 928-5147-90).