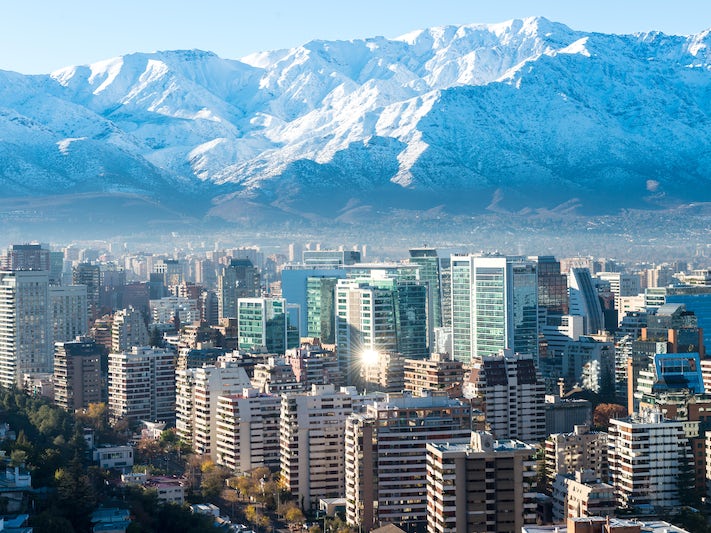 Find Things to Do in Santiago (Valparaiso) on Viator

Popular Things to Do in Santiago (Valparaiso)

Food and Drink in Santiago (Valparaiso)

Seafood is king in Santiago: Sample the delicious Chilean sea bass (known as corvina), the locally farmed salmon, or the Chilean specialty congrio, conger eel, which is actually a kind of fish. Patagonian lamb is also delicious. And soon you'll see that Chileans love bread; look for the "marraqueta," a flat roll served almost everywhere. Fine Chilean wines add to the dining pleasure.

In Valparaiso
On the Pier: Bote Salavidas (Muelle Prat, lunch from 12:30 p.m.), located on the harbor on the main pier, has great views through glass walls and is one of Valparaiso's best seafood restaurants. Three-course lunches are about $15.

In Santiago
Local Lunch: Central Market is a lunch tradition in Santiago, as popular with locals as with tourists. The market, a vast bustling emporium with a soaring roof has been a fixture since 1872. It is filled with vendors selling every kind of fish you ever dreamed of -- and some you never imagined. Hawkers will try to lure you into one of the many cafes in the market, but the place to go is Donde Augusto, where you may be dining beneath a photo of Bill Clinton or another familiar celebrity. Set meals, including a Pisco sour, soup, generous main course and dessert, begin around $30. The strolling musicians come free.

Editor's Note: The market opens at 6 a.m. daily, except Sunday. Restaurants serve Monday - Thursday until 4 p.m., Friday to 8 p.m., and Saturday to 6 p.m.

Though it originated in neighboring Peru, Pisco sours have been adopted as the national drink in Chile, and are served almost everywhere. The ingredients are Pisco brandy (made with the skin of white grapes), lemon juice, sugar and ice. Sometimes egg whites are added for extra froth.

Plaza de Armas: This square of palms and fountains was laid out by Pedro de Valdivia, the Spanish conquistador who founded the city in 1541. It is the historic heart of the city, lined with handsome Spanish Colonial-style buildings, including the City Hall, Natural History Museum, the Post Office, and the Metropolitan Cathedral, the city's grandest church. Step inside the cathedral to see the gilt arches and the high marble altar set with lapis lazuli. Erected in 1745, this is actually the fifth church on this site. The first one was burnt down by Mapuche Indians just a few months after it was built, and the others were destroyed by earthquakes in 1552, 1647 and 1730. It is one of many buildings in the city rebuilt in Colonial style following earthquakes. The ornate twin bell towers were added in the late 1800's. The square itself is a lively scene, populated with artists, living statues, vendors, chess players and, of course, tourists (Plaza de Armas Metro stop).

Just one block southwest of the Plaza de Armas on Bandera is the Museum of Pre-Columbian Art, Santiago's most outstanding museum. Here you'll find an unmatched collection of carvings in wood and stone, ceramics, and pottery and textiles from the early inhabitants of South and Central America and Mexico, especially the Andes tribes. There are some 3,000 items on display. Open Tuesday - Sunday, 10 a.m. - 6 p.m.

Constitution Square: The city's most formal square, about six blocks from the Plaza de Armas, is home to statues of heroes and to the Palacio de la Moneda, the presidential palace. Tours can be arranged at the reception desk. The changing of the guard takes place every other day at 10 a.m. The plaza is the roof of an underground bunker built by Augusto Pinochet when he took over the government in an infamous military coup in 1973. Today it is a parking lot (La Moneda Metro stop).

Santa Lucia: At the edge of downtown is the lushly landscaped Cerro Santa Lucia, a triangle-shaped hilltop named by Valdivia. According to some accounts, it was the spot where he founded Santiago in the name of the crown of Spain. The bare hillside was transformed in 1872 as part of an effort to turn Santiago into a European-style city, providing gardens, squares and terraces where fashionable residents could stroll and enjoy panoramic views. It was restored in the 1990's and an elevator to the summit was added.

The Castle Hidalgo at the summit is an exhibition center for native art, and outdoor plays and concerts are held here in the summer. Enter at Avenida Alameda and St. Lucia, or take the elevator on St. Lucia Street at Agustinas. The paths are open daily from 9 a.m. - 8 p.m. from September to March, and 9 a.m. - 7 p.m. from April to August. Free. Near the tourism office at the Alameda entrance is a display of Chilean crafts and a bustling crafts and flea market is in action across the street (Santa Lucia Metro stop).

Bellas Artes: This small artistic neighborhood near the foot of Santa Lucia hill, located between the Alameda and Parque Forestal, is a favorite of artists and writers, home to pleasant bars, cafes and art galleries, an 18th-century church and several museums. The grand National Fine Arts (Bellas Artes) Museum, built in 1905, is two museums in one, showing Chilean and international painters, and incorporating the Museum of Contemporary Art. (Parque Forestal, Tuesday - Sunday, 10:30 a.m. - 6:30 p.m., free on Sunday ). The attractive new Museum of Visuales Arts (Artes Visuals) showcases the work of some 300 local artists as well as encompassing the Anthropology Museum displaying ceramics, textiles and other artifacts by the native peoples of Chile. (307 Lastarria, Tuesday - Saturday 11 a.m. - 7 p.m., Sunday 11 a.m. - 5 p.m.) Interesting boutiques are found around the Plaza del Mulato Gil de Castro off Lastarria. (Bellas Artes Metro stop).

San Cristobal: Take the funicular railway or a gondola to the summit of San Cristobal Hill in Santiago's Metropolitan Park for an unforgettable view of the city and its mountains. At the top is a gleaming statue of the Virgen de la Immaculada. The park, a green retreat from city traffic, also includes a botanical garden and the city zoo. The funicular runs Monday 1 a.m. - 9 p.m., Tuesday - Sunday 10 a.m. - 8 p.m. Cable car operates weekdays 2:30 - 6:30 p.m. and weekends 10:30 a.m. - 7:30 p.m. (Baquedano or Pedro de Valdivia Metro Stop).

Though it is seedy in spots, bohemian district Bellavista (Bellavista Metro stop) has colorful houses; a host of shops, sidewalk vendors and cafes; and a tempting flea market along Pio Nono street. It is also the location of La Chascona, one of the intriguing homes of Nobel poet Pablo Neruda. It was the romantic hideaway for Neruda and his third wife, Matilde, for years before they were married. Winding garden paths, stairs and bridges lead to the home with a bedroom in a tower and a secret passageway.

Barrio Paris-Londres and Barrio Brasil: Take a pleasant stroll through these unique enclaves built for the well-to-do Barrio Brasil, south of the Plaza de Armas (Cumming Metro stop). The enclaves were developed at the end of the 19th century for the aristocracy and is the epitome of Latin of all the city's neighborhoods, with iron grill work and gurgling fountains. Today, it houses a university and is filled with young people. Paris-Londres is lined with small mansions erected in the mid-1920's when European style was all the rage. The streets are even named Paris and London. Some of the three- and four-story homes are now restaurants or small hotels. (Santa Lucia Metro stop; walk south on Alameda and turn left onto Avenida Londres.)

Vina del Mar: For those who have seen Santiago or want a change of scenery, this posh seaside resort just down the coast from Valparaiso is known for its palm tree-lined boulevards, fine hotels and dining, miles of beach and the country's oldest casino. The "don't miss" sights include its famous floral clock (that actually works) and the archaeological treasures at the Fonck Museum, known for its Easter Island collection.

Chile is increasingly famous for its wines, and a tour of vineyards is a pleasant outing from the city. The Maipo River Valley, about an hour from Santiago, has the country's greatest winemaking tradition and is home to 17 wineries known for their fine reds. The elaborate estate of Concha y Toro is the country's largest winemaker. The nine wineries of the Casablanca Valley are also popular. Many companies offer day tours from Santiago, which run from $50 to $85 per person and usually include lunch. Contact Turismo Cocha, or ask your hotel for a recommendation.

Pomaire: This crafts village famous for its earthenware pottery is about 43 miles from Santiago. Buses depart frequently from Terminal San Borja in downtown Santiago. Pomaire is also included on some winery tours.