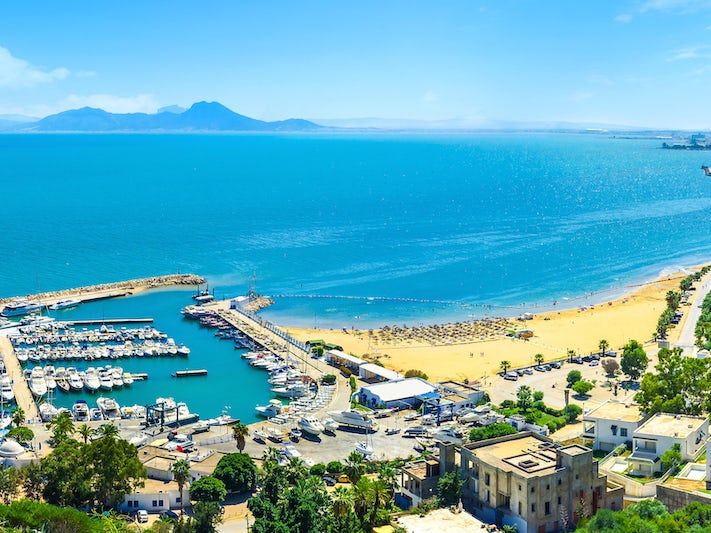 Find Things to Do in Tunis (La Goulette) on Viator

Popular Things to Do in Tunis (La Goulette)

Fish, couscous with vegetables, grilled meat, eggplant salad and cookies filled with dates and fried in olive oil are all on the must-eat list here. Casual eateries tend to serve light meals and snacks throughout the day; restaurants, on the other hand, generally are open until about 2 p.m.

Best Choice in Sidi Bu Said: We had a lovely, elegant lunch at Dar Zarouk (Rue Hedi Zarouk), a boutique hotel and restaurant perched on the edge of the mountain and overlooking the sea; the fish dishes are specialties. Another good spot for catching your breah is Cafe Sidi Chabaane (Rue Hedi Zarouk), which has a terrace built on the side of the cliff, also overlooking the mountains and sea.

The Souk: It's a cobweb of shops in a huge covered building, where tradition has existed for hundreds of years. It's located in the heart of downtown (open daily from 10 a.m. to 2 p.m.; the entrance is at Bab el Bahr). This is the city's commercial and social center. Stalls of dates, carpet weavers, handicrafts galore (camel skin shoes, silver jewelry, inlaid boxes, spices, ceramics) and cafes line the passageways.

In the souk, La Rachidia serves up fine quality antiques and art objects and has been in the same family for generations. It is near Cafe M'rabet, on Souk Ettrouk, 11. For rugs (and heavy negotiating), check out the rug shop across the way at Souk Ettrouk, 6.

Souk shopping can be confusing and it's a good idea to go with a ship guide (on a shore excursion). Haggling is second nature there, and you should never pay the first price you're given. We snagged a small, woven Berber rug for $160, getting the price knocked down from $450, after much negotiating and walking out of the shop twice. It's actually exciting to bargain, to feel part of an ancient culture. And even if you're not a shopper, the sights and sounds in the narrow alleyways will amaze you. Keep an eye out for the tea men who offer mint tea served elaborately on a silver tray and poured from a height. (A tip is requested.)

Editor's note: Remember, if you start bargaining it is considered rude not to complete the deal when a fair price is offered. Also be aware the mostly male vendors are not beyond grabbing your arm to get your attention. Once you stop to look at something, haggling will begin.

The Bardo Museum: Le Bardo (closed Mondays; open other days 9 a.m. to 5 p.m.), is located in a glorious 18th-century white- and blue-trimmed palace near the Tunisian parliament building, and features a very impressive collection of mostly ancient Roman mosaics displayed on walls and floors. There are also collections of marble statues and jewelry from the ancient world. Note: Le Bardo is quite a distance from the port and is not really close to any other attractions, so you may want to investigate cruise-ship tours that visit there.

Ruins of Ancient Carthage: They're just a quick taxi ride from the pier. Interestingly, our ship's shore excursion manager downplayed the site -- it's not as complete a ruin as, for instance, Ephesus -- but we found it absolutely fascinating. Carthage, founded by the Phoenicians in the ninth century B.C., was destroyed by the Romans after three wars and then rebuilt to become one of Rome's most intriguing provincial capitals. The ruins are scattered, and a modern residential neighborhood has been built over most of the area. It's lovely with lush gardens and obviously expensive homes -- one of the nicest places to live in Tunisia.

We started with the Antonin Baths -- an elaborate bathhouse and entertainment center that sits on a most scenic coastal spot (the presidential mansion is atop a hill overlooking the baths). You can climb down into the basements and admire hieroglyphics and lush gardens. As well, don't miss the Acropolium, though admittedly the French-Moorish cathedral is a newcomer (built in the 19th century!); it's now a cultural center. Also on site: the Carthage Museum, which showcases found objects that range from a real-life skeleton to gold jewelry, and Byrsa Hill, an archeological site.

Editor's note: Even if you visit via a ship tour, be prepared to pay a fee (on our trip, one euro) for a ticket allowing tourists to photograph the ruins.

Sidi Bou Said: Described as a Tunisian Santorini, this village clings to the hillside above the blue sea; comprising charming, white-washed and blue-shingled houses, no wonder it has inspired poets and artists, such as French novelist Colette and Swiss painter Paul Klee. The village, which was once a major summer resort, features a main street/souk that is awash with small shops, selling typical souvenirs like magnets, as well as pretty ceramics, leather goods and bird cages.

Don't miss a visit to Dar el Annabi, a "typical" Sidi Bou Said house that's open to the public. The house is built right on the road and is not prepossessing from the outside, but its charm is that it stretches infinitely back, with lovely rooms that are decorated in mosaic tiles and skylights; there are even a courtyard and a prayer room. A sample of mint tea is complimentary with the entrance fee (which, on our trip, was 2.50 euros).

More peaceful is the marina below the retail mayhem and narrow, cobbled streets of the village.

North Africa American Cemetery: This burial ground in Carthage (about 14 miles from Tunis), covers 27 acres near Ancient Carthage. White crosses and Jewish stars sit in neat rows. Here lie 2,841 American military dead, or about 39 percent of the military burials originally made in North Africa and Iran (construction was completed in 1960). Most gave their lives in the landings in and occupation of Morocco and Algeria and subsequent fighting, which resulted in the liberation of Tunisia.