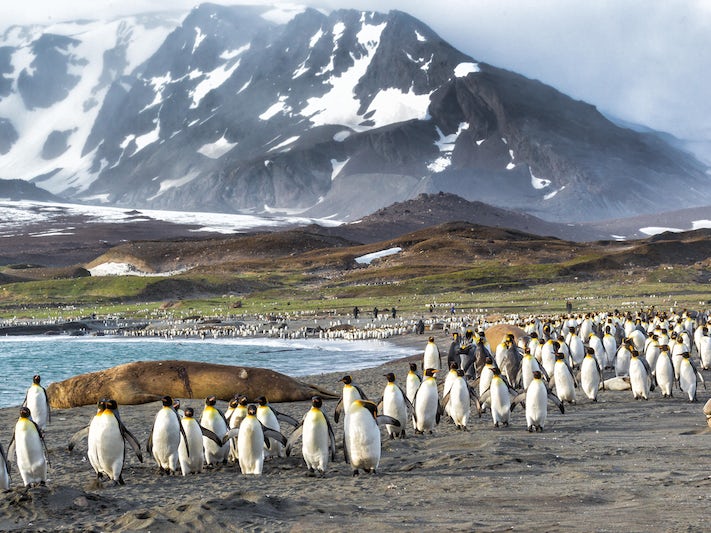 Find Things to Do in Stanley on Viator

Popular Things to Do in Stanley

Food and Drink in Stanley

Malvina House Hotel: Despite its name, this has no Argentine connections; it is claimed to be a Scots Gaelic name, after Malvina Nathalia Felton, whose father John James Felton who built the original building. The fine dining restaurant uses the best fresh local ingredients. (3 Ross Road; +500-21355).

Waterfront Hotel: This is nearby, and has a cafe during the day with dinner served in the evenings. Homemade produce is available along with coffee and fresh fruit juices. (36 Ross Road; +500-21462).

The Globe Tavern: situated opposite the jetty, this serves pub food at its finest -- fish and chips, chips with gravy, burgers, bangers and mash, washed down with British ale. On cold days, a peat fire warms the entire establishment. (Corner of Crozier Place and Philomel Street).

Penguins: All visiting ships will offer excursions to visit penguin rookeries and trips are also bookable at the visitor centre. The Falklands are home to five separate species of penguin -- Gentoo, King, Magellanic, the striking crested Rockhopper, and the rarely-seen Macaroni penguin. The Gypsy Cove reserve is just a short taxi ride away; visiting Bluff Cove is a longer journey by 4WD vehicle.

The Historic Dockyard Museum: opened for the first time in 2014, is within easy walking distance of the jetty and incorporates three of the oldest buildings in Stanley, erected in the 1840s and rescued from years of neglect. The main exhibits focus on social history, maritime history, the 1982 conflict, natural history and a pioneering exhibition on Antarctic history. The RT station -- telling the evolution of radio and telecommunications in the Falklands -- has also been relocated to the site. The RT hut was a lifeline to 'Camp' (the local term for everything outside Stanley) in the 1900s, providing links to Stanley for teachers to give lessons, doctors to give medical advice, and in 1982 for school children to update their parents that they were safe. (Check address and phone number; open Monday to Friday, 9:30 a.m. to 4p.m. and 2 p.m. to 4p.m. at weekends from November to March. Admission £3 (free for under 16s).

Christ Church Cathedral: the southernmost cathedral in the world, with a distinctive whalebone arch in the grounds. Consecrated in 1892, the church is featured on Falkland's banknotes and its rather plain interior contains poignant memorials to men who died in the 1982 conflict. (Ross Road).

Cape Pembroke: Visiting for a second time? A half-day walk takes the intrepid visitor to Cape Pembroke and its 19th century lighthouse. The area is occupied by many bird species, including albatross, grebes, hawks, petrels, Magellanic snipe, Falkland pipit, and peregrine falcons.

Fishing: Sea trout were introduced to the Falklands 50 years ago and the tourist board can arrange fishing expeditions to remote estuaries. Locals are allowed to catch and keep up to six fish a day; visitors are not allowed to take their catch back to the ships, and must use barbless hooks so their fish can be released harmlessly.