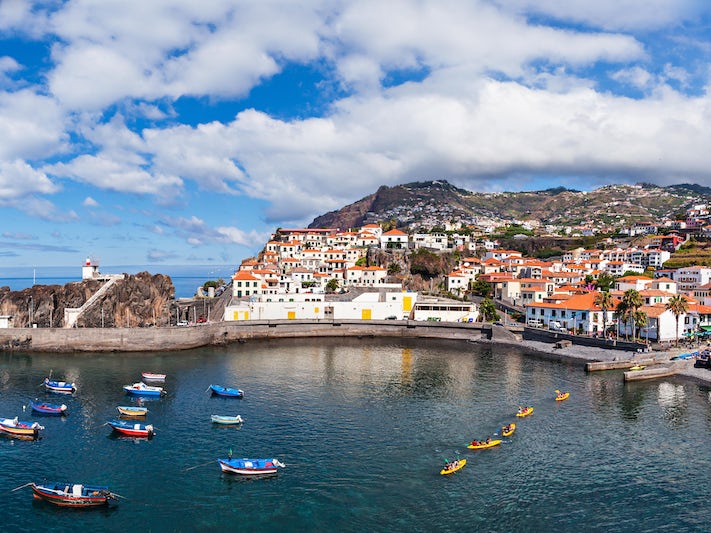 Find Things to Do in Madeira (Funchal) on Viator

Popular Things to Do in Madeira (Funchal)

Food and Drink in Madeira (Funchal)

The first thing you need to know about dining in Funchal -- or all of Madeira, actually -- is that everything is made with garlic. Garlic is as ubiquitous as salt and is used with as much abandon. Okay, desserts are garlic-free but that's about it.

There are three "typical" dishes in Madeira that are fabulous; if you can try at least one of them during your visit, you'll be grateful: Tomato and onion soup is hearty, delicious, garlicky and to be eaten with hunks of artisan bread; espada, a long, black, really ugly, but unbelievably delicious fish native to the deep waters off the islands; and espetada, (definitely not to be confused with espada), which is hunks of marinated beef (with, yes, lots of garlic) grilled on a bay twig skewer. Other local specialties include rabbit, kid (young goat) stew and fish stew.

At the harbor: There are many boats around the harbor that have been turned into floating restaurants, but the Vagrant (Harbor, Funchal, 291-223-572) is the most well-known because at one time it belonged to the Beatles. It doesn't play on that connection very much, but the seafood is good and hearty. Open from 10 a.m. until 11 p.m. every day.

Local eats: Jaquet (Rua de Santa Maria 5, 291-225-344), located near the open market, is a simple restaurant serving simple (and garlic-laden) fare. Prices are reasonable and the food is all fresh -- grilled tuna, steaks, fish stews, shrimp in garlic sauce. It's a perfect place to stop during your walk around the market. Open for lunch and dinner.

Levada Walking: When the slaves were imported into Madeira in the 15th and 16th centuries, they set to work developing the unique and enormous network of irrigation ditches all over the island, built to bring water from the highest points to the lowest. Modern technology has changed the face of irrigation so these ditches are no longer used for their original purpose, but they have been preserved as hiking trails. Levada maps are available at the tourist office kiosk in town. You can take the cable car up the mountain and hike the levadas back town if you prefer a less vigorous workout.

Cable Car to the Monte: This modern cable car brings you up to Monte; it is a 15-minute ride with an approximate 1,800-foot incline. The trip takes you up and over the old town of Funchal and the Ribeira de Joao Gomes valley, and deposits you in the charming town of Monte, featuring gorgeous views over the south coast of Madeira. Open from 10 a.m. until 6 p.m. daily; cost is approximately 9 euros one way (at Almirante Reis Park in Old Town).

Toboggan the Monte: In 1850, some enterprising folks decided to create toboggans made out of wicker to bring people down to Funchal from Monte, high in the mountains. The tradition holds today; the two-person wicker "sledges" are "driven" down the streets of the mountain by two men in traditional white garb. The rubber soles of their boots act as breaks, and it's a good thing, too: The sledges achieve speeds of nearly 20 miles per hour as they twist along the pavement from the top to the bottom. Cost is approximately 10 euros per person (bottom of stairs at Nossa Senhora do Monte Church; 291-783-919).

Tea at Reid's Palace: Reid's Palace (291-717-171), a 115-year-old sprawling pink marvel located at the edge of town, is one of the great historic hotels of the world. Situated on 10 acres of lush cliffside, the hotel offers a very British high tea in the afternoons. Settle onto the terrace in one of the wicker armchairs and gaze down upon your cruise ship as you sip proper English tea, delicately bite into crustless sandwiches, and take little bites of Madeira cake. Actually, it's not at all stuffy; in fact, this is a great outing for the entire family.

Mercado dos Lavradores: The Old Town "Worker's Market" in Funchal is open from 7 a.m. until 8 p.m. during weekdays and on Saturday until 2 p.m.; it is a real bird's-eye view into the life of the typical Madeiran. Comprising a fish market (make sure to get a look at the local fish, espada: long, black and really ugly), a craft market and a flower market, you'll find plenty to take with you.

Ferry to Porto Santos: Since the volcanic island of Madeira has no beaches and the smaller island of Porto Santo has golden sands and warm water, a ride on the new ferry (Madeiran Pride) is an option for a nice day trip.

Note: The ferry leaves Funchal at 8 a.m. and returns at around 2:30 p.m. so you need to verify that it suits your ship's arrival and departure schedule. Cost per adult is about 60 euros roundtrip.

Madeira Wine Lodge: Choose from among several producers of Madeira wine, sister to Port, which is produced in mainland Portugal. Madeira, a dessert wine fortified with brandy, is grown from six varieties of grape that flourish on the island. Some of the lodges that offer tastings are H.M. Borges (Rua 31 de Janeiro 83, 291-223-247), Pereira D'Oliveira (Rua dos Ferreiros 107, 291-220-784), and Vinhos Barbeito (Estrada Monumental 145 -- right next to Reid's Palace, 291-762-434).

Gallion Santa Maria: Set sail around the island on this contemporary reproduction of Columbus' famous ship, complete with crew. Leaving from the Funchal Marina twice daily, the 100-passenger boat has covered areas and lavatories, and serves Madeira wine and honey cake; its crew will spot and point out any whales and dolphins that take the same route that day (291-220-327 or 291-225-695).