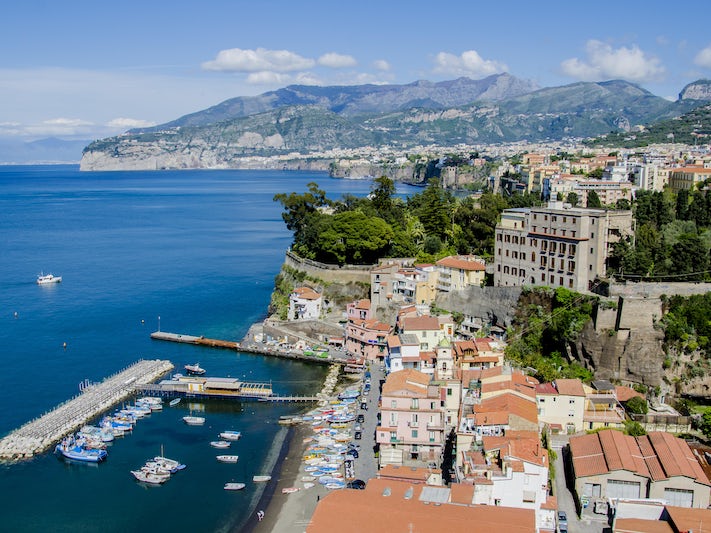 Find Things to Do in Sorrento on Viator

Popular Things to Do in Sorrento

Food and Drink in Sorrento

Sorrento's tourist areas are chockablock with restaurants, from cafes lining the various piazzas to upscale restaurants in fancy hotels. You can't go wrong with pizza (some of the best in Italy is found in Naples and its surrounding towns) or fresh fish. Skip dessert at lunch and stop later in the afternoon for a gelato (creamy Italian ice cream) or a taste of locally made limoncello (sweet lemon liqueur) at a bar. Most restaurants will charge a coperto (cover charge) of a few euros for bread and the privilege of sitting down at a table (a la tavola); this is separate from the service charge or gratuity, which may or may not be included. If you're having a coffee (caffe) or snack and don't care about sitting down, you can skip the coperto by bellying up to the bar. In some Italian bars, you pay first at the cashier stand and then order you food and drink at the counter.

On a hot day, an Aperol Spritz is a cool, refreshing and not overly alcoholic cocktail. It's a combination of bright-orange Aperol (an Italian bitter orange aperitif), prosecco and a splash of soda water, served over ice, usually in a balloon-type wineglass. Cin-cin!

‘O Canonico 1898 and Pizzeria Aurora: These twin restaurants give visitors the option of more upscale or more casual dining from the same kitchen. O'Canonico serves up traditional cuisine, including homemade pasta, fish and meat dishes, and has an award-winning wine cellar. The more casual Pizzeria Aurora offers an enormous selection of toppings for its wood-oven pizzas. Both restaurants have outdoor seating, perfect for enjoying warm weather and life in Sorrento's main square. (7 Piazza Tasso and 10/11 Piazza Tasso; 011 39 81 8783277 and 011 39 81 8781248 , restaurant open daily, noon to 4 p.m. and 6:30 p.m. to midnight; pizzeria open daily, 11:30 a.m. to midnight)

La Basilica: For a splurge, try a prix-fixe tasting menu (fish, meat or vegetarian versions) including starter, pasta, main dish, dessert and coffee. There's also an a la carte menu available. The restaurant is run by the same owners as pricier Caruso, but with similar-quality cuisine. Seafood is the specialty here -- try the ravioli stuffed with fish. (28 Via Sant'Antonino; 011 39 81 8774790; open daily, 1:30 a.m. to midnight)

L'Antica Trattoria: If you're looking for a fancier place to sample the local cuisine, head to this vine-covered courtyard, where the specialty is its antipasti. Reservations are recommended. (33 Via Padre Reginaldo Giuliani; 011 39 81 8071082; open daily, noon to 11:30 p.m.)

Gelateria David: You can't walk a block in Sorrento without stumbling across a gelato shop, but for an amazing selection of flavors, head straight for Gelateria David. Typical flavors like chocolate and strawberry are augmented by more unusual selections like noci di Sorrento (Sorrento walnuts), delizia al limone (lemon cream) or Ferrero Rocher (tastes like the milk chocolate-hazelnut candies). (19 Via Marziale; 011 39 81 807 36 49; open daily, 8 a.m. to 1 a.m.)

If you want to while away the day sunning or splashing in the sea, Sorrento can accommodate you. Just don't expect big, picturesque swaths of sand. Most seaside access is via private concessions, with a small entrance fee. All are to the right of the tender port, a few minutes' stroll from Marina Piccola. Just follow the walkway that runs along the base of the cliff.

Best for bargain-hunters: If you don't want to pay for water access, there's a small, free beach, which is likely to be packed with kids and teens in the summertime.

Best for ambiance: Pay a few euros and you'll find a much calmer scene -- along with changing facilities, food and drinks -- at one of the private waterfront concessions. You can take a quick look (they're all in a row), to see which one suits you. Some have a beach area, while others have more of a swimming-pool effect, with concrete piers and ladders down to the water.

Pompeii: Without a doubt, this is the highlight, must-do regional attraction. Because Pompeii is so massive (some 66 acres), it's best viewed with a guide -- either on a shore excursion or by arrangement on your own (our favorite local guide is archaeologist Dr. Paolo Gardelli, 011 39-348-893-1459). For those who want to go it on their own, there is a commuter train (the Circumvesuviana) that runs frequently from Sorrento to Naples with a stop near the ancient site (ask at the train station for specifics). Pompeii was once a city of 20,000 inhabitants before it was buried by an eruption of Mount Vesuvius in 79 A.D. The majority of the city has been excavated and the ruins are amazing. On a tour you will see enough ruins and marble streets to visualize a commercial center with shops, temples, baths, theaters, villas and some 22 houses of ill repute (one marked by a still-visible symbol of a male body part...). One big reason to go with a guide is the capricious opening and closing of various buildings. If you go without a guide, be sure to get a map and inquire at the entrance about which houses are open -- otherwise, you could waste a lot of time walking around the site, only to discover a padlock on the door of a house you were eager to see. An advantage to skipping the group shore excursion is the ability to visit those far-flung buildings that won't be packed with tourists. During the trip to Pompeii you can also view Vesuvius, the still-active volcano, looming over the scene. (127 Via Roma and 2 Via Villa dei Mysteri, Pompeii; 011 39 81 8575 347; open April 1 to October 31, Monday to Friday, 9 a.m. to 7:30 p.m., Saturday and Sunday 8:30 to 7:30 p.m., last entrance at 6 p.m.; open November 1 to March 31, Monday to Friday, 9 a.m. to 5 p.m., Saturday and Sunday 8:30 to 5 p.m., last entry at 3:30 p.m.)

Amalfi Coast Road: Driving the steep and winding Amalfi Coast, even on a bus, can be a white-knuckle experience, but the views are worth it. You can catch a bus to Positano, the well-known hideaway of artists and writers (including John Steinbeck). The town is now filled with boutiques and fancy hotels but still a pretty place to visit -- pastel-colored houses spill down a cliff to the sea. Be prepared for a leg workout; the streets are steep. Also note the hourly buses can get very crowded, and occasionally people get bumped -- allow plenty of time to get back to your ship. You can also catch a boat to Positano from Sorrento, with boats making the 45-minute trip about four times a day. Taxis between Positano and Sorrento are about $75 each way.

Capri: The island of Capri, located just across the Bay of Naples, has charming villages (Anacapri and Capri) full of boutiques and sidewalk cafes and is a fun destination for easygoing sightseeing. Other diversions include a boat trip to the Blue Grotto (daily, regular departures from 9 a.m. throughout the day, departs from Marina Grande on Capri, weather permitting); it's a fabulous sea cave. Also check out Villa San Michele (34 Viale Axel Munthe, Anacapri; 011 39 81 837 1401; open daily, 9 a.m. to 6 p.m.). The 18th-century home of a Swedish physician, this elegant villa has lovely furnishings, classical art and a gorgeous garden. Antiquities buffs might enjoy hiking the 45 minutes up to the ruins of Villa Jovis (Via Tiberio, Capri; 011 39 81 837 0381; open Wednesday to Monday, 10 a.m. to 6 p.m., last entrance 5:15 p.m.; seasonal hours may vary), one of Roman Emperor Tiberius' 12 known villas on the island. To get to Capri, take the hydrofoil from Marina Piccola; the trip across the Bay of Naples takes 25 minutes each way, and boats dock at Marina Grande on the island. Beware, if the weather looks at all iffy or seas are high, you could risk getting stuck on Capri. We visited once when boats were canceled for several hours (fortunately not on a cruise!).

Naples: Naples is the largest city in the area around Sorrento, and its primary tourist attraction is the Museo Archeologico Nazionale, also known as the National Archeological Museum (Piazza Museo; 011 39 81 442 2149; open Wednesday to Monday, 9 a.m. to 8 p.m., last entry 7 p.m.) which, according to popular opinion, has better displays of artifacts from Pompeii than Pompeii itself. The museum also features a truly world-class collection of classical sculpture, Egyptian antiquities, murals and mosaics. If your tastes lean toward the scandalous, don't miss the Gabinetto Segreto, a once-forbidden "secret cabinet" of erotic art from Pompeii and Herculaneum. Other historic sites in Naples include the 13th-century Castel Nuovo (Piazza Municipio; 011 39 81 795 7722; open Monday to Saturday, 8:30 a.m. to 7 p.m., Sunday until 2 p.m.) and the Museo Nazionale di Capodimonte (2 Via Miano; 011 39 81 749 9111; open Thursday to Tuesday, 8:30 a.m. to 7:30 p.m., Thursday until 10:30 p.m.), which was an 18th-century palace and has now been restored and transformed; it showcases an excellent collection of Renaissance art. Plus, when in Naples, be sure to eat pizza -- you can't go wrong with a traditional margherita pizza (mozzarella, tomato and basil).

Scenic trail: For those looking for some exercise, there's decent, scenic hiking in the green hills above Sorrento. Trails are marked and the local tourist office (35 Via de Maio) can offer specific advice.

Chiesa di San Francesco: Dating from the 14th century, Chiesa di San Francesco offers pretty archways and a lovely garden. The convent is also an art school that regularly offers exhibits. The nearby Villa Comunale gardens are a pleasant setting for resting weary feet while enjoying panoramic views of the Bay of Naples. (The Cloister of St. Francis; Via San Francesco; 011 39 81 533 5254; open daily, 9 a.m. - 6 p.m.)

Herculaneum: Like Pompeii, Herculaneum was destroyed during the eruption of Mount Vesuvius. This smaller, more upscale town of about 5,000 inhabitants has only been partially excavated but, because it was inundated by a pyroclastic surge of superheated gas, rather than just ash, you can often see even more intriguing details than are available at Pompeii. You'll discover charred woodwork, furniture and the sad, huddled skeletons of citizens who rushed to the waterfront in hopes of being rescued by boat. (75 Via Mare, Ercolano; 011 39 81 7324111; open daily, April 1 to October 31, 9 a.m. to 7:30 p.m., last entrance at 6 p.m.; November 1 to March 31, daily 9 a.m. to 5 p.m., last entry at 3:30 p.m.)