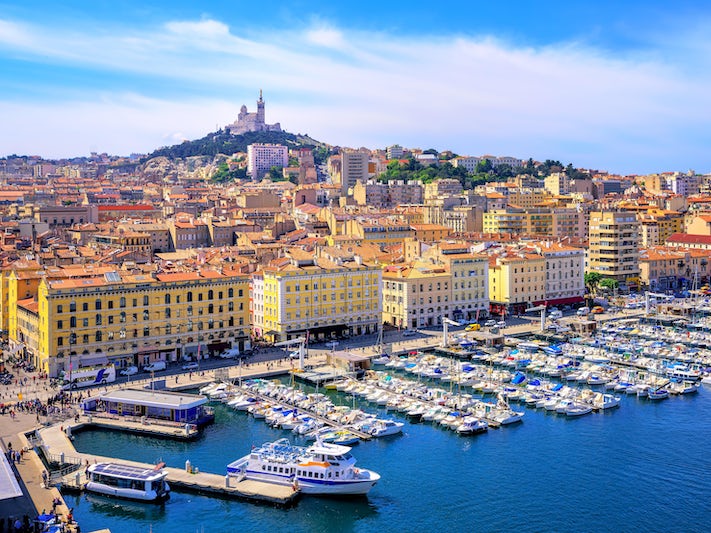 Find Things to Do in Marseille on Viator

Popular Things to Do in Marseille

Food and Drink in Marseille

If you're happy to rely on serendipity, stroll around Le Vieux Port, along the quai du Port, quai du Rive Neuve or around nearby Place Thiars, a pleasant square lined with al fresco eating areas. Here you'll find many restaurants offering classic French lunchtime dishes such as moules, steak-frites or the local favorite, bouillabaisse. Just follow your nose, and your instincts.

Chez Ida: This small, popular restaurant offers top-rated home cooking and a warm atmosphere. Its menu ranges from French classics like ratatouille to empanadas and lasagne. (7 rue Ferdinand Rey; 33 4 91 47 04 97; open daily from noon to 2 p.m., and from 8 p.m. to 11 p.m.; open for dinner Friday and Saturday, 8 p.m. to midnight)

Though wine is the national tipple in France, the locals are increasingly getting into beer and the city now has its own microbrewery, Biere de la Plaine (16 rue Saint-Pierre). It supplies local bars with fruity, home-grown brews which come in many versions, including blonde, wheat and pale ale.

Water babies will be pleased to hear that Marseille has some natural beaches on its southwest coastline, and three man-made ones -- called Les Plages de Corbiere -- which lie to the north of the city in the district of L'Estaque.

Most beaches here are pebbly rather than sandy, but the southern ones (in particular Plage des Catalans and Plage du Prado) can be fun at the height of the summer season (July and August), when kayaking, snorkeling, kite flying, beach rugby and dance contests are organized. Unfortunately, this also means they are very popular -- and therefore crowded -- in peak season.

From May to September, a fast boat service known as the Batobus operates hourly between Le Vieux Port and Pointe Rouge, a small but sandy, crescent-shaped beach with a swimming pool, lifeguard stations and a variety of shops and restaurants.

Boats leave from the Quai des Belges, near the ferry point for the Ile de Chateau d'If. The journey takes about 45 minutes and costs a few euros, but be warned that there can be long queues in summer, as commuters use the service alongside beach lovers. Buses also run from the Le Vieux Port to the beach areas.

Marseille's charming markets: Most are open daily between 8 a.m. and 1 p.m. The Fish Market (near Le Petit Train departure point on Quai des Belges) is a local institution and a lively spot where you'll see local restaurateurs -- and possibly your ship's chef -- haggling for that day's catch. A better spot for foodies in search of take-home goodies is Les Halles de la Major, a gourmet food market set in the vaults of Marseille's La Major Cathedral.

Ile de Chateau d'If: This pretty island is a 20-minute boat ride from Le Vieux Port's Quai des Belges and is home to the 16th-century fortress-turned-prison described by Alexandre Dumas in his famous novel, "The Count of Monte Cristo." Ferries run by GACM (049 155 5009) and operate hourly from 9 a.m. to 5 p.m. (weather permitting). Round trip costs 50 euro-cents. The Chateau opens daily from 9:30 a.m. to 6:30 p.m; entrance fee is 5.50 euro.

Basilique Notre-Dame-de-la-Garde: This 19th-century Catholic basilica sits at the top of Marseille's highest point, La Garde Hill; it can be a tricky walk up, but the effort is worth it for the sweeping views of the Mediterranean. (Note: The petit train stops here and waits awhile, so those too unfit, time-strapped or -- let's face it -- lazy to manage the uphill hike can always let the train take the strain.) (Rue Fort-du-Sanctuaire; open 7 a.m. to 7 p.m.; free entrance)

Cathedrale de la Major: This lovely cathedral is one of Europe's largest and is celebrated for its multi-colored marble altar and Turkish-style dome. Once you've taken in the architecture, head to the vaults, where shops now occupy the arches that once served as port warehouses. (Place de la Major; open daily except Monday, October to March from 10 a.m. to 5:30 p.m., and April to September from 10 a.m. to 6:30 p.m.; free entrance.)

Palais Longchamp: Built to celebrate completion of a 19th-century canal that brought water into the city from the River Durance, this splendidly elaborate colonnaded water tower is a visual treat. You'll find Marseille's Fine Art Museum in one vast wing and the Natural History Museum in the other (3 euro to enter, or free with a Marseille City Pass). There are also acres of spectacular parkland and botanical gardens to explore here, so it's a good option if you like to spend time in the fresh air. (Boulevard du Jardin Zoologique, 13004 Marseille; accessible via the Cinq Avenues Longchamp stop on Metro line 1; museums open 10 a.m. to 5 p.m., closed Mondays)

Bargain hunting: Head to one of Marseille's main shopping thoroughfares, the pedestrian-only rue St Ferrell in Le Vieux Port, to browse shops selling regional specialities and craftware. Or blow away the cobwebs and dodge the tourist crowds with a stroll along the Cornice President JF Kennedy, which overlooks the glittering Mediterranean on one side and has shops, cafes, gardens and restaurants on the other.

MuCEM: The Musee des Civilisations de l'Europe et de la Mediterranee is a futuristic, architect-designed waterfront museum which was built at the entrance to Le Vieux Port to celebrate Marseille's tenure as a European Capital of Culture 2013. It offers fascinating insight into the city's importance as a melting pot for many European cultures. (7 Promenade Robert Laffont; 33 48 4 35 13 13; open daily except Tuesdays, from 11 a.m. to 7 p.m. in summer, and to 6 p.m. in winter)