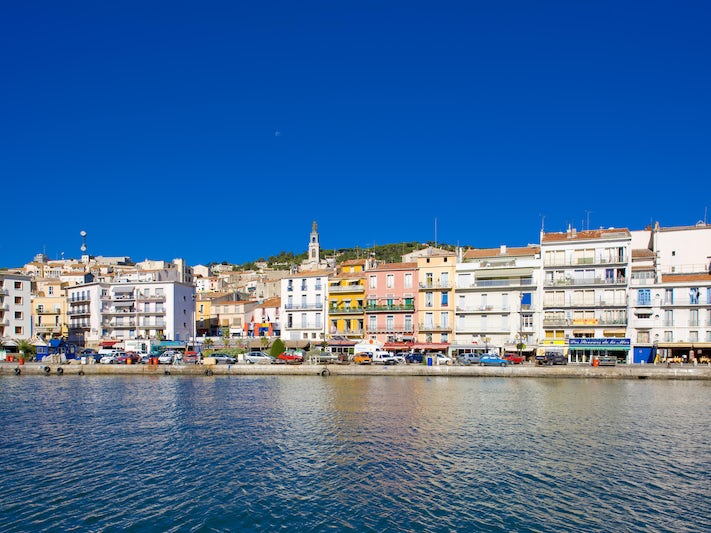 Find Things to Do in Sete on Viator

Popular Things to Do in Sete

Food and Drink in Sete

Casual Dining: The town is filled with small sidewalk cafes, and those located on the Quai Maximin Licciardi seem to be filled with locals. They offer similar menus that emphasize seafood. Pick the one with the fewest smokers, order the famous moules frites (mussels and fries as only the French can make them), pour some French wine, and enjoy the passing scene. Further up the same street (now the Quai de la Resistance), several pastry shops and bakeries offer dessert.

Luxurious Lunch: For a more elegant (and expensive) meal, dine at La Rascasse (27 Quai General Durand, 04.67.74.38.46), a bright spot with a window-lined dining room and a few outside tables that take advantage of its location right on the Canal Royal. It features local and regional specialties (read seafood!), a nice wine list, and opens for lunch at noon.

Centre Regional d'Art Contemporain (26 Quai Aspirant Herber, 04.67.74.94.37, 12:30 p.m. - 7:00 p.m. Monday, Wednesday, Friday, 1:00 p.m. - 6:00 p.m. weekends, free) is a regionally funded center that showcases whatever it feels is new and interesting in (primarily French) contemporary art. The building stands out as a rather stark structure in the otherwise picturesque and early 20th-century style of its surroundings. The exhibitions are unusual (very unusual and very experimental); attendants do make an effort to bridge the language barrier.

La Decanale Saint-Louis (1 Rue Pascal, open services only, free) is the main church in the town, and very unlike the grand churches elsewhere. The building is plain, with a long stairway up to the main old wooden doors. The church was built in 1702, and features a statue of the Virgin Mary atop the bell tower, clearly visible from the pier. The tower also contains three working clocks.

Parc du Chateau d'Eau (end of Avenue Max Dormoy) was created in the mid-1800's. It is a fully realized space with lots of old shade trees, greenery and open areas and benches for children and adults alike. A highlight in the park is a war memorial, complete with statuary and inscriptions to those who died for France. In large, bold, golden characters are the years 1914-1918. Unfortunately, it wasn't the "war to end all wars," and in rather cramped spaces are the years 1935-1945 and then 1952-1962, making the memorial even more sadly eloquent.

Mont Saint-Clair (end of Rue de Belfort) is for those looking for an exhilarating hike, culminating in a climb of about 400 steps. The peak offers Sete's highest and best view, allowing visitors to appreciate the town's beauty and its lacy series of canals. Nearby is the Notre-Dame de la Salette, a small chapel that contains some interesting frescoes. The church is the destination for the annual autumn pilgrimage of fishermen's wives.

For a uniquely Sete experience, wander the canals. The downtown canals are all fronted with pedestrian-friendly walkways, and the bridges allow strollers to easily pass from one section to another. Or consider a boat ride through the canals. In season, the Sete Croiseres (04.67.46.00.46) offers a variety of boat trips through the canals and along the coast. The information booth is on Quai General Durand opposite the Tourist Office.

For those with a bit more ambition, but still averse to hill-climbing, venture out on the Mole Saint Louis (jetty) for a panoramic view of the port and the town and for a closer examination of the lighthouse and some early fortifications built in the 1700's.

And of course, shopping. The main streets of Sete around the canals are filled with shops, some tourist in nature, but many obviously catering to the locals. The Quai de la Resistance and the Grand'rue Mario Roustan are lined with food and specialty shops. Some of note include Biscuiterie Catagnia (35 Grand'rue Mario Roustan), Leonidas Sweets (8 Rue Frederick Mistral), and Au Chocolat Liegois (6 Quai de la Resistance).

Annie Quedre Streliski is a local sculptor who maintains her workshop/gallery at 14 Rue Pascal. Her work is dramatic and unusual; however, even the small pieces cost several hundred euros, and she does not accept credit cards (although she does have an arrangement with the butcher next door who does accept them ... go figure).

Come on, really, you haven't been here before. But if the little village of Sete is just not your thing, try a day trip to Aigues Mortes, a fortified city located in the heart of the Petite Camargue, built in the 13th century and standing quite alone in a melancholy landscape of ponds, sea marshes and saltpans. Aigues Mortes originally served as a departure harbor for the crusades of St Louis. Its Constance Tower is one of the most majestic pieces of architecture from medieval times, and served as a lookout post to fend off the Saracens.