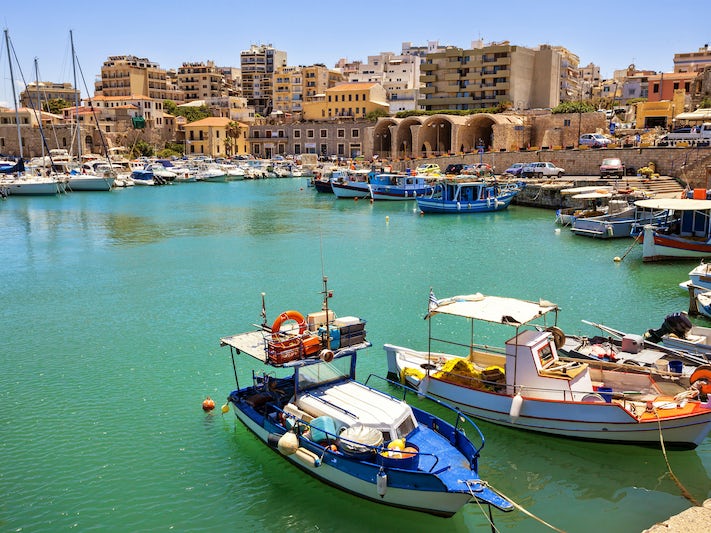 Find Things to Do in Crete on Viator

Popular Things to Do in Crete

Food and Drink in Crete

Restaurants and taverns are plentiful in Iraklion, but if you're eating on the run you'll find the city's version of fast food to be some of the best in the world. Dozens of corner bakeries sell flaky pastries with spinach, ham or cheese inside, and a gyro stuffed with juicy pork and tomatoes then slathered with garlicky yogurt sauce makes an excellent portable snack.

Best Local Eats: Ippocampus (3 Mitsotaki Street, lunch from 1 p.m. - 3:30 p.m.) is just a short walk from the harbor and offers appetizer-sized portions of tradition Cretan dishes such as calamari or fried zucchini slices. The restaurant is popular with both locals and tourists so the wait can be long, but the food is worth it.

Best for an Upscale Treat: Kyriakos (53 Leoforos Demokratias, lunch from noon - 5 p.m.) is consistently touted as serving some of the finest cuisine in town. Snails are a house specialty, but for those with less adventurous appetites the lamb stew is excellent as well.

Best for Families: Pantheon (2 Theodosaki Street, lunch from 11 a.m. on) is one of several restaurants located on the picturesque street commonly known as "dirty alley." Don't let the colorful nickname frighten you, though, because the restaurants lining this narrow street offer homestyle cooking along with a wonderful view of the hustle and bustle of the nearby outdoor markets. Since Pantheon sits right on the corner its views are the best, and its seafood, stews and vegetable dishes are all simple but tasty.

Ouzo may be the drink of choice in other parts of Greece, but in Crete the locals favor a grape brandy called tsikoudia. This aromatic liquor packs a mean punch but it pairs quite well with Greek salad and other local dishes.

Best for Families: Amoudara Beach is the largest in the area and lies less than four miles away from Iraklion. There are plenty of hotels, shops and restaurants nearby, which also means that crowds can be daunting in high season.

Best for Water Sports: Agia Pelagia is roughly 12 miles outside Iraklion and offers calm seas, a laid-back resort atmosphere and plenty of chances to enjoy activities like water skiing and wind surfing.

Best Secluded Beach: The beach at Paliokastro, about 10 miles west of Iraklion, is sheltered by the remains of a Venetian fortress. The beach is small and the sand is a bit pebbly, but the water is gorgeous and the scenery can't be beat.

Knossos Palace: This is one of the most important archeological finds in the world, and many visitors come to Iraklion for the sole purpose of visiting Knossos. The collection of ruins dates back nearly 4,000 years and is associated with both King Minos and the evil minotaur, who supposedly lived in a maze beneath the palace. Several of the more significant rooms have been renovated to give visitors a better idea of how the ancient royals went about their daily lives. The grounds are open from 8 a.m. to 7 p.m. April through September, and 8 a.m. to 3 p.m. from October through March. The site lies four miles outside of town and a cab ride costs about 7 euro. Buses for Knossos also leave every 10 minutes from the bus station right across the street from the harbor.

The Archeological Museum: The assortment of art and artifacts housed here is nearly dizzying and visitors should give themselves at least two hours to browse the entire collection. Colorful frescoes and statues removed from Knossos Palace are here along with an amazing collection of vases, an assortment of ancient jewelry and several ornate drinking vessels shaped like the head of a bull. Be sure not to miss the famous Phaestos Disc, which is near the beginning of the museum and can be easily overlooked among the hundreds of glass cases. The museum is just a few blocks south of the harbor and is open 8 a.m. to 7 p.m. April through September, and 8 a.m. to 5 p.m. from October through March.

Market Street: Officially known as 1866 Street, this narrow alley near the center of town is jam-packed with shops and stalls selling fruits, vegetables, wines, jewelry and local crafts. A little good-natured haggling is perfectly acceptable here, but don't expect more than a small discount. Tacky souvenir stores have begun to invade the area in recent years, but it's still a fun place to wander aimlessly while soaking up the local color.

Fountain Square: Also known as Lions Square because of the stone lions which adorn the fountain, this is the central hub of activity in downtown Iraklion. The square is lined with cafes, bakeries and ice cream shops, and although the majority of the restaurants serve mediocre food, stopping here for a cold soda or a cocktail is a nice way to escape the sun for a few blessed minutes.

The Tomb of Nikos Kazantzakis: The author of "Zorba the Greek" is laid to rest at the southern juncture of the Venetian walls which surround the city. It takes a good half hour to walk here from the harbor but the quiet, tranquil spot provides a nice panoramic view of both Iraklion to the north and Mount Iouktas to the south. The mountain's craggy outline resembles the profile of a man's head, and local legend proclaims it to be the face of the great god Zeus.

Historical Museum of Crete: This museum houses a more modern collection than the Archeological Museum, but there are some nice paintings by El Greco here in addition to Byzantine ceramics, an assortment of weapons, flags and uniforms from Crete's revolutionary days, and an extensive collection of coins and bank notes dating from the early Christian period through modern times. The museum is open 9 a.m. to 5 p.m. from April through October, with shorter hours during the winter.