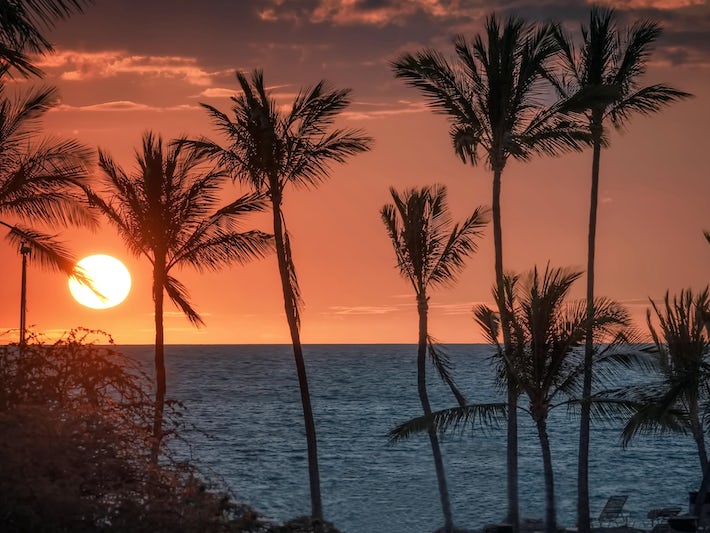 Find Things to Do in Kona (Kailua Bay) on Viator

Popular Things to Do in Kona (Kailua Bay)

You can't go wrong with a Hawaii-themed cocktail like a Lava Flow (a cross between a strawberry daiquiri and pina colada, made with light rum and coconut rum plus strawberries, bananas, pineapple juice and coconut cream) or a Blue Hawaii (a concoction of rum, curacao, pineapple juice and sweet and sour mix). For something a bit more local, order a beer from the Kona Brewing Co. or a drink made with Ocean Vodka, made with water sourced from deep sea water off the Big Island's coast.

Closest to Port: Kamakahonu Beach is a crescent-shaped beach just across from the tender pier and King Kamehameha Hotel. A water sports stand rents snorkel gear, kayaks, bikes and standup paddleboards and can book you on an outrigger canoe ride. The beach's shallow, clear waters and proximity to bathrooms and beach showers make it ideal for families or anyone looking for a quick dip pre- or post-tour. Old Airport Beach (Kailua Park) and Magic Sands Beach are also close to Kailua-Kona but will require a car, cab or trolley ride.

Best for Snorkeling: Just a few miles south of Kailua-Kona, Kahaluu Beach Park is quite popular with snorkel enthusiasts (see "Don't Miss" above). You can rent equipment onsite and paddle into the water to see Hawaii's green sea turtles and other marine life.

Best for a Day of Sunbathing: You can easily spend the day at the resort area of Waikoloa, with its beautiful beaches and fancy resorts offering amenities like restrooms, water sports rentals and even interesting cultural attractions onsite. Hapuna State Beach Park, about a 45-minute drive from the Kailua pier, is the largest white sand beach on the island. Located next to the Hapuna Beach Prince Hotel, the beach offers easy parking, available bathrooms and picnic areas. Another good choice is Anaehoomalu Beach, next to the Waikoloa Beach Marriott. You'll find watersports rentals (body boards, kayaks, hydro bikes, snorkel equipment) and even an old Hawaiian fishpond.

Historic Kailua-Kona: Kailua Village has several historic sites worth checking out. These include Ahuena, King Kamehameha's temple, the grass-thatched structure sitting on a rock that you can see from Kamakahonu Bay (to the front and left from where you get off tender); Mokuaikaua Church, the first Christian church in Hawaii; and Hulihee Palace, once a summer palace for Hawaii's royal family. These sites, as well as others along the seven-mile Alii Drive, are included in the Royal Footsteps Along the Kona Coast free smartphone app, which lets you take a self-guided historic tour of the area.

Cultural Attractions: Most resorts will have some sort of historic sites on their premises. These might include lava tubes or ancient fishponds, where grates were set up to allow in smaller fish but keep the bigger fish from getting out. While most visitors don't visit a hotel simply to view the cultural attractions on its grounds, you might wish to take time out of your beach or golf day to look around. Find the resort's cultural director, who can point you to interesting locations or alert you to any cultural performances (like hula dancing) taking place that day.

Outrigger Canoe Rides: Travel the way the ancient Hawaiians traveled, in these hand-crafted wooden canoes. You can book rides at the rental kiosk at Kamakahonu Bay, right by the pier, where you'll get a sense of the history of these vessels before you get in for a ride. Hotel activity desks may also arrange canoe rides.

Kona Farmers' Market: Tired of ABC stores? Hit the Kona Farmers' Market for a more fun and authentic shopping experience. You can ogle local produce and flowers, or pick up hand-crafted gifts and Kona coffee. (Intersection of Alii Drive and Hualalai Road; open 7 a.m. to 4 p.m. Wednesday to Sunday)

Eco Adventures: Those looking for an adrenaline boost can try zip-lining, ATV rides and nature hiking with Kona Eco Adventures. Tours can be booked by phone or online, and tour pickup is at the Keauhou Shopping Center on Alii Drive in Kailua-Kona. Another recommended outfit for adventure tours is Hawaii Forest and Trail, offering waterfall, birding and zip-lining tours.

Kaloko-Honokohau National Historical Park: This significant historical site is located next to Honokohau harbor and its fishing boats. Take a self-guided walking tour along the footpaths and view ancient fishponds, heiaus and petroglyphs. You might even see green sea turtles on the beach. (Highway 19, three miles north of Kailua-Kona; visitor center and parking lots open 8:30 a.m. to 4 p.m. daily)

Helicopter Tours: From Kona, helicopter tours will fly you over the Mauna Kea and Mauna Loa volcanoes, as well as Kilauea with its active lava flows. Longer tours will also circle over the island's northern coastline to see waterfalls and other breathtaking sceneries.