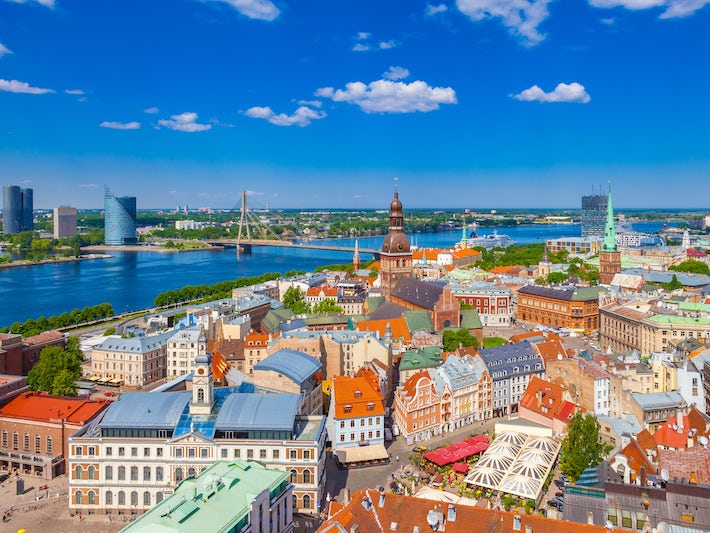 Find Things to Do in Riga on Viator

Popular Things to Do in Riga

Food and Drink in Riga

The Amber Way Tavern (Torna 4, Jacob's Barracks, 732-12-60, 11 a.m. - 11 p.m.) is in a cozy cellar and offers a Latvian sample platter, accompanied by Latvian beer, served in a folksy atmosphere on long wooden tables.

The "in" crowd hangs at B-Bars (Doma Laukums 2, Old Riga, 722-88-42, 8 a.m. - midnight), where the interior is hip and the cocktails inviting, including various balzams concoctions -- the cuisine here is upscale, international.

Old Riga is on the UNESCO World Heritage list for its diverse architecture, which ranges from Gothic to Baroque to Classicism to Art Nouveau. You can spend hours exploring the twisting cobblestone streets and alleyways, viewing historic buildings that have for the most part been restored from bombings during World War II, including the converted Jacob's Barracks, now home to trendy shops and cafes. See the old city wall (which dates from the 13th century and Three Brothers -- Maza Pils, 17, 19 and 21), the oldest stone residences of the city. Street performers and artists are in the various squares. Among the historic churches, the Dome Cathedral (Coma laukums, Tuesday - Friday and Sunday, 11 a.m. - 4 p.m.; Saturday 10 a.m. - 2 p.m.), originally founded in 1211 (it has been destroyed and rebuilt several times), is the largest house of worship in the Baltics and home to one of the largest organs in Europe.

The Art Nouveau buildings throughout the city serve up an exciting outdoor gallery of architecture. Many of the buildings were designed by Russian architect Mikhail Eisenstein, father of famous Russian filmmaker Sergei Eisenstein ("Battleship Potemkin"), and boast such flamboyant embellishments as half-naked women and lions. A good concentration can be found on Alberta Street. One of the best examples is the house at Stelnieku 4a, built in 1905; now home to the Stockholm School of Economics the building has been carefully restored to show off the flamboyant style including a magnificent circular interior staircase.

The city's Central Market (Centraltirgus) is interesting not only for its numerous food stalls and the general hustle and bustle, but also for the fact it occupies several huge buildings that were zeppelin hangars during World War I.

Particularly important to Latvians is the Freedom Monument (Brivibas and Raina, on the edge of Old Riga). An honor guard patrols the area and Latvians place flowers at the base of the monument, an act for which they may have ended up in Siberia during Soviet times. Nearby in the park known as Bastion Hill are memorial stones to five people killed by Soviet troops during the crackdowns in January 1991, right before the country's liberation.

If there is one must-do museum it is The Museum of the Occupation of Latvia (Stelnieku laukums 1; summer hours 11 a.m. - 6 p.m., daily). It's housed in an ugly, Soviet-built structure that was once a space honoring the Latvian Red Riflemen, and explains what life was like under the Nazis and Soviets in sometimes graphic, heart-wrenching detail. Exhibits explore the murder of 90 percent of the Latvian Jewish population by the Nazis and the deportation of tens of thousands of Latvians to the Soviet gulag. There are also exhibits on the fight for Latvian independence.

On the edge of the city (about 7.5 miles from the city center) the Open Air Ethnographic Museum (Brivibas gatve, 10 a.m. - 5 p.m.), founded in 1924, provides a look at traditional Latvian life with real farmhouses, fishing shacks, churches and other historical structures -- 90 in all -- transported to 200 acres of pretty, lakefront property. The buildings date from the 16th to 20th centuries. In summer, craftsmen do demonstrations and Latvian food and drink are served in the tavern.

Only about an hour from Riga, Jurmala Beach has been a favorite vacation destination for Rigans since around 1830. In addition to nice, sandy beaches are restaurants, cafes, hotels and casinos, as well as Livi, the largest waterpark in the Baltics. The city of Jurmala itself boasts charming, 19th- and 20th-century cottages -- and a great photo op.

For something completely different, head to the hilltop to see Turaida Museum Reserve, daily 10 a.m. - 6 p.m.), which is also about an hour outside the city. The area includes the medieval Turaida Castle (parts date to the 13th century). There is also a medieval cemetery and ancient church. From the largest castle grounds you can admire the very scenic views of the Gauja River valley.