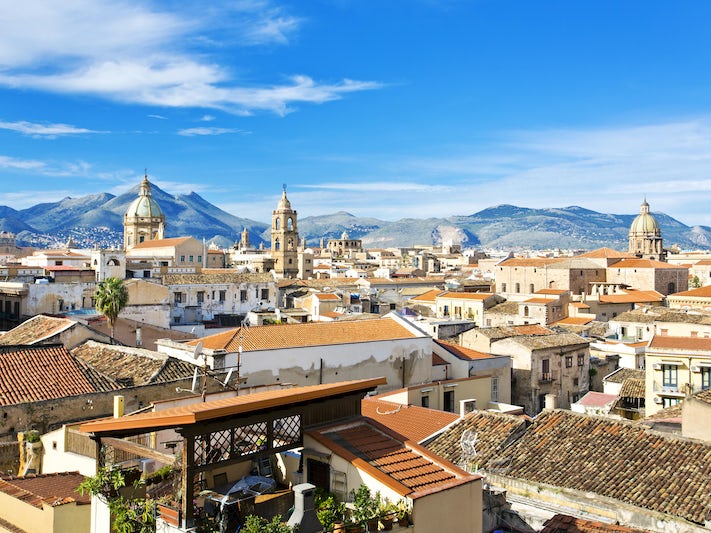 Find Things to Do in Palermo (Sicily) on Viator

Popular Things to Do in Palermo (Sicily)

Food and Drink in Palermo (Sicily)

Palermo has an excellent street food scene, and cafes and pizzerias also abound. Generally speaking, avoid places that have hawkers outside. If you're a foodie, you can easily access the best of Palermo on culinary walking tours. Many cruise lines also offer cooking lessons or excursions in Palermo that focus on local dishes. (Excursions to local vineyards are also sometimes offered.)

Dishes to look for include arancina (fried rice balls stuffed with various fillings), panelle (chickpea fritters, often put in a bun), and sfinciuni, Sicily's thicker version of pizza. Pastries such as cannoli and brioche are also common; for a real sweet treat, eat your gelato as the residents do, stuffed into a brioche!

One restaurant that is highly recommended is Sapori Perduti, located on a side street (Via Principe di Belmonte) not too far from the port. The venue features new, albeit a little pricy, Sicilian cuisine. Open for lunch and dinner.

The busy Quattro Canti -- four corners, where Via Maqueda and Via Vittorio Emanuele meet
-- is the heart of the tourist district. The wine bar Bisso Bistrot, on Via Maqueda, is highly rated, and has options for vegans and people who are gluten free.

Bar Marocco, right across from the cathedral, has the best gelato we had in Palermo, as well as pastries.

Arab-Norman Architecture: Several of Palermo's churches and palaces have UNESCO World Heritage designation for their Arab-Norman architecture, which is unusual; Sicily is one of the few areas where these two cultures co-existed. These include the Cattedrale, the main cathedral of Palmero. If you aren't afraid of heights, you can go up 200 stairs to a catwalk observatory that gives you fabulous views of the city (alas, the interior isn't as interesting as the exterior).

Other buildings of note include the Royal Palace (Palazzi di NormannI), the Church of San Cataldo and the Church of the Martorana. Check locally for hours, as they can vary. The cathedrals in nearby Monreale and Cefalu are also part of the UNESCO designation and worth seeking out.

Capuchin Catacombs: The Capuchin monks have more famous catacombs in Rome, where the bones of the dead are displayed in fantastical patterns. Their catacombs in Palermo are perhaps even more macabre, with full skeletons and mummies on display, often in the clothes they were embalmed in. The crypt is located outside the city center, so you'll want to take a taxi or tour. Hours are 9 a.m. to 1 p.m. and 3 p.m. to 6 p.m.

Anti-Mafia Tours. Fans of "The Godfather" know Palmero and Sicily for its notoriety with Cosa Nostra, otherwise known as the mafia. While you can take mafia tours that bring you to Corleone, the city's tourism board has shied away from activities that glamorize or promote a group that brought so much crime to the city.

Instead, take an "anti-mafia" tour that educates you about the attempts made by city residents and businesses to wrest power away from organized crime (tours run Thursday and Saturday). There's also a small museum not far from the cathedral on Via Vittorio Emanuele.

Western Sicily:If ancient history is what moves you, then look into longer daytrips -- your time in port permitting -- into the surrounding hills of western Sicily. Some of the major sites include Segesta, where you'll find a preserved temple (not necessarily built by the Greeks but by the Elymians, the indigenous people of Sicily) and Agrigento, home of the UNESCO-listed Temple Valley. Or try Erice, a preserved medieval town with more than 60 churches.

Best for White Sand: Mondello has the prettiest sand and water in the area. While it can get crowded in July and August, this is the best beach if you want to avoid the rocks that are prevalent at many Mediterranean sea towns. Excursions and buses go here, or you can take a taxi.

Best for History: Cefalu is a charming seaside town that has another UNESCO-listed Arab-Norman cathedral. The pace here is slower than in Palermo, but there are still plenty of cafes and shopping to keep you entertained. Excursions or taxis are the best ways to get here.