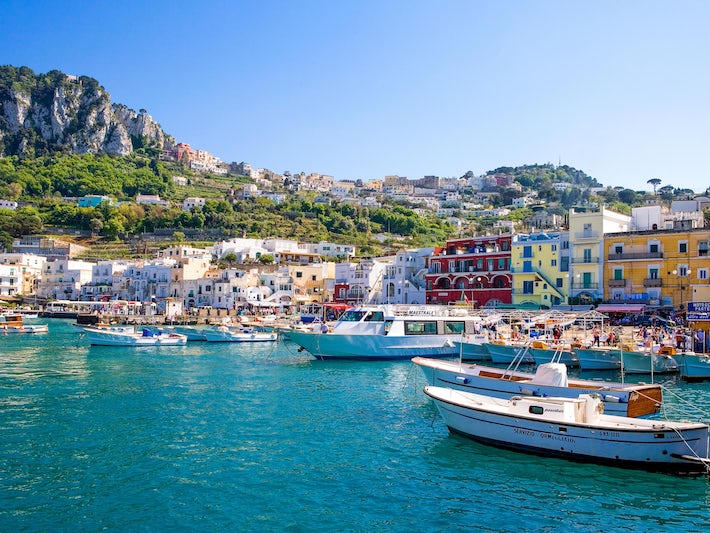 Popular Things to Do in Capri

The thought of vacationing in Capri, the little island off the coast of Italy, probably brings to mind visions of glamorous celebrities lounging on attractive beaches and luxurious boats. But Capri isn't just for the rich and famous. In fact, Capri is a cruise port and even a popular destination for Italians from the mainland. Once you navigate beyond the busy, hectic port area, you'll find just what you expected -- upscale boutiques, cozy restaurants and those picturesque white-washed villas the island is known for. Cruisers should ride the cable car to the top of Mount Solaro, as part of an excursion, for the most spectacular views.

Capri is hot during the summer, and most people choose to visit during the winter months to avoid often-stifling temperatures. Italian is the official language in Capri, though many people who work in the tourism industry understand at least some English (just be sure to politely ask rather than assume). The euro is the official currency.

Find Things to Do in Capri on Viator

Food and Drink in Capri

There are outdoor cafes and restaurants all along the waterfront in Marina Grande, and plenty more up in Capri Town.

Da Paolino Lemon Trees Restaurant: Set on the waterfront beneath a canopy of lemon trees, this lovely spot offers sea views and is a good place for a traditional Italian lunch of salad caprese (fresh tomato, mozzarella and basil) and pasta. (Via Palazzo a Mare 11; +39 081 8376102; open for lunch noon to 3 p.m. and from 7 to 10 p.m. for dinner)

Ristorante Casanova: A good choice for an affordable lunch in Capri Town, this laid-back spot offers pizzas and pasta dishes for around 12 euro and has a well-stocked antipasti buffet. (Via le Botteghe 46; +39 081 8377642; open for lunch noon to 3 p.m. and from 7 to 10 p.m. for dinner)

Bagni Tiberio Capri: You can catch a boat from the Marina Grande's beach to this pretty seaside mini-resort, which lies close to the ruins of what was once the Emperor Tiberius' summer residence and has a (pebble) beach, a wooden terrace for sunbathing, a restaurant and a snack bar. You can also get free Wi-Fi and take tours around the island to the Blue Grotto. (Palazzo a Mare 46; +39 081 8377688, open daily throughout the summer)

When in Italy, sip a Campari and orange (a sophisticated antidote to sun-induced thirst). Or opt for an Aperol Spritz: chilled prosecco enlivened by a splash of Aperol, a vivid orange liqueur which is a little like Campari, but distinctly less bitter.

Piazza Umberto I: Also known as the Piazzetta, this pretty square is Capri Town's hub and is lined with chic cafes. The 18tth-century Baroque cathedral, the picturesque clock tower and the town hall are all worth a look.

The Blu Grotto: The walls of this limestone cavern, Capri's most famous geological phenomenon, turn a deep and sparkling blue by the reflections of the sea which fills it. To add to the effect, the local boat operators who take tourists in there on small motorboats demonstrate the cave's echoing acoustics by giving hearty renditions of 'O Sole Mio.' Great fun, but beware of banging your head on low rock faces, and be prepared to have your trip canceled if the seas are too rough.

Villa San Michele in Anacapri: This is the spectacular former home of Swedish writer Axel Munthe. Raised from the ruins of a villa built by Emperor Tiberius, it has glorious gardens and stunning sea views, and contains an impressive collection of Roman artifacts and 17tth-century furniture, as well as a statue of Hermes given to Munthe by the city of Naples in gratitude for his work in the city during the cholera epidemic of 1884. (+39 081 8371401; open daily 9 a.m. to 6 p.m. May to September, 9 a.m. to 5 p.m. April to October, 9 a.m. to 4:30 p.m. March and9 a.m. to 3:30 p.m. November to February)

Giardini di Agosto: You'll find these lovely gardens by walking from the main square of Capri Town down Via Vittorio Emanuele. The park offers wonderful sea views and overlooks the Faraglioni (rocks which form three pinnacles as they rise from the sea).

Hit the Shops: The grandest boutiques in Capri Town are to be found on Via Vittoria Emanuelle, Via Camarelle and Via Tragara. If you're really determined to splash out, or just want to daydream while viewing some serious rocks, check out La Perla Gioielli on Piazza Umberto I -- it's Capri's most prestigious jewelery store (and, we suspect, another of Liz Taylor's favorite places).

Get High: Enjoy dizzying sea views from Anacapri and Mount Solaro. You can go on foot (if you are very fit) or take the Monte Solaro chairlift (free to children under 8). The chairlift entrance is on Piazza Della Vittoria in Anacapri, and the ride takes about 12 minutes.

Hike: Go on a hike and enjoy spectacular views every time you stop to catch your breath. Maps featuring suggested walking routes can be picked up for about two euro from tourist booths at the pier or on Piazza Umberto I.