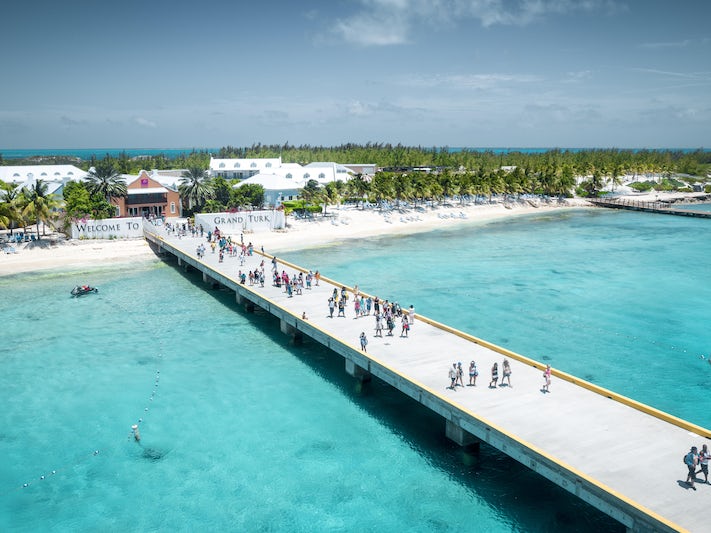 Popular Things to Do in Grand Turk

You might find a stop in Grand Turk on your Eastern Caribbean cruise itinerary, but this island in the Turks and Caicos is actually in the Atlantic -- just a quick hop from the Bahamas. Despite being the capital of Turks and Caicos, Grand Turk is less than 7 square miles and has a decidedly more relaxed vibe than other more touristy Caribbean outposts. Since it lies along one of the largest barrier reefs in the world, there are plenty of great shore excursions for beach bums, divers and snorkelers. If you're looking for a bit more to explore, check out Splashdown Grand Turk, an exhibition dedicated to John Glenn's historic 1962 space flight, after which he landed off the coast of the island.

As with most islands in this area, Grand Turk is hot and humid for most of the year, making it a popular destination year-round (but especially when it's winter in the Northern Hemisphere). English and Spanish are both widely spoken in Grand Turk, and it uses the U.S. dollar.

Find Things to Do in Grand Turk on Viator

Food and Drink in Grand Turk

Most restaurants you will encounter in port cater to tourists and provide Americanized versions of bar food and pub grub: burgers, quesadillas and mixed salads, with some fresh seafood on the menu. But the name of the game is conch for Caribbean cuisine, and Grand Turk is no different.

John's Ocean View Bar, a more-local-than-local joint located along Front Street, provides native brews, conch and drinks at cheap prices. Get the grilled conch and ask for homemade hot sauce (it comes in a water bottle). John's doesn't have an exact address, but as a testament to the times, it has its own Facebook page. (649-243-7157)

Editor's Note: Because the island is so laid back, addresses and hours are often flexible or unlisted; unless otherwise noted, lunching suggestions are located on the main drag in Cockburn Town.

Outside of the immediate cruise center, Jack's Shack is where most cruisers seemed to flock for a day of drinks, local food and relaxation. Owned by Jack and Janet (the listed phone numbers are their cellphones), their website encourages you to "Follow the crew away from the crowds for a real island experience." A menu prepared by a Caribbean chef includes items like jerk chicken, spicy steamed conch, fish stews and peas and rice. The menu also has typical bar food offerings. However, vegetarian meals are not readily available, and seafood is limited. You'll find water sports gear and full resort amenities like free Internet, lounge chairs, floats, beach umbrellas, volleyball gear, showers, restrooms and storage lockers. Sign in online and print a coupon for a welcome shot of local rum. (500 yards north of the cruise center; 649-232-0099 or 649-244-9309)

Barbie's Bar and Restaurant is a local favorite featuring conch fritters and native island cuisine. Easy to spot from the road, but not as common with tourists, this might be your best bet for an authentic Grand Turk meal. (Churchill building, Cockburn Town; 649-946-2981)

Most of the restaurants on the island are connected with its few resorts. Secret Garden Restaurant at the Salt Raker Inn is a great place for cracked (delicious deep-fried) conch. (Duke Street; 649-946-2260)

The Sandbar, an outdoor bar on the beach across from the Salt Raker and neighboring Manta House, is a great spot for a quick snack, serving up quesadillas, burgers and cracked conch. (Duke Street; 649-243-2666)

The Birdcage at the Osprey Beach Hotel is open for lunch, with island dishes like spicy conch salad, fresh fish and lobster, as well as curries, pizzas, salads and key lime pie. Tables surround the pool and overlook the ocean (1 Duke Street; 649-946-2666)

Though there are no real "upscale" eateries on this casual island, Guanahani Restaurant at the Bohio Dive Resort is probably Grand Turk's finest, on a quiet strip of Pillory Beach. The menu changes daily; lunch offerings are eclectic -- French, Italian and American with a Caribbean twist. Entrees range from simple fresh fish sandwiches and pecan-crusted mahi mahi to jerk chicken. (Bohio Dive Resort, Pillory Beach; 649-946-2135; open for lunch daily)

Try a rum punch, a concoction of coconut rum, dark rum, pineapple and orange juices and grenadine. The best we've had is at Sandbar, across from Manta House on Duke Street. If throwing back a beer is more your style, try Turks Head, brewed on nearby sister island Providenciales.

Best for Seclusion: Governor's Beach is a crescent of soft sand and calm, turquoise ocean waters that fronts the official British governor's residence. On a clear day, this is the best spot on the island for off-shore snorkeling -- just a few minutes out, you'll find views of fish and coral. This also the spot where locals come on a Sunday to have a casual get-together. A shipwreck can be seen just off the beach.

Low, cliff-edged Bluff Point Beach is located just west of the lighthouse; in the spring and summer, you might even spot flamingos.

Best for Divers: Pillory Beach is regarded as Christopher Columbus' first landfall in the New World. The sheer reef wall, located 400 yards off the shore, makes this one of the most popular departure points for divers. The Bohio Dive Resort, on the beach, features its own dive shop.

Turks and Caicos' major claim to fame, beyond its gorgeous white sandy beaches, is the fact that it sits on one of the world's largest coral reefs. Dive operators on the island, including Blue Water Divers and Grand Turk Diving, offer diving and snorkeling programs for everyone from novice snorkelers to the most advanced divers. Don't miss Columbus Landfall Marine National Park and the Grand Turk Wall, which leads from light blue shallow waters of about 40 feet to an azure expanse that indicates a sheer drop to 7,000 feet. The Wall is known for great views of coral and other marine life. If you prefer to stay (somewhat) dry, there's also excellent fishing. Tuna, wahoo and blue marlin inhabit these same rich waters.

Duke and Front Streets in Cockburn Town are lined with historic 18th- and 19th-century buildings that mirror the Bermudan-style architecture (pastel-painted wood) of the salt-raking era (salinas, or salt ponds, still run throughout the city, although production was shut down in the 1950s). The area along Front street is where the first homes on the island were settled, and the area remains mostly residential. Cockburn Town is the administrative capital, too, and a walking tour takes you past the governor's house, old churches, the public library and a small plaza containing the Columbus Monument, which claims that the explorer landed in Grand Turk in 1492.

Don't let its small stature fool you -- the two-floor Turks and Caicos National Museum outlines the history of the islands alongside various displays highlighting maritime history. A central display explores the history of the Molasses Reef Wreck, the oldest European shipwreck discovered in the Western Hemisphere (dated around 1513), which some historians believe could be Christopher Columbus' Pinta. Guided tours and exclusive behind-the-scenes showings are available.

There's also an exhibit dedicated to U.S. astronaut John Glenn, whose Friendship 7 spacecraft splashed down off the coast, making Grand Turk the spot where the first American to orbit Earth returned to the planet. The museum is located inside the historic Guinep House (one of the oldest buildings on Grand Turk, named for the large guinep tree that stands out front). The museum is open "one hour after the ship arrives and closes one hour before the ship departs."

Check out Gibbs Cay, located on the Atlantic side of Grand Turk and just a short boat ride away. Snorkel, indulge in a barbecue lunch or feed and play with the friendly stingrays that swim right up to the shore.

The Grand Turk Lighthouse is more than 150 years old and stands on the northern tip of the island, opposite the cruise terminal. It was built in the U.K. and transported piece by piece with hopes that it would bring a halt to the many shipwrecks on Grand Turk's reefs. In its earliest years, wrecks continued -- legend has it that enterprising thieves would douse the whale oil lamps in hopes of new bounty, though written history chalks it up to the light being dim or simply going out. In 1943, kerosene light took its place; the lighthouse went electric in 1971. The old lens is on display in the museum; informative plaques surround the lighthouse, and the spot offers a breathtaking view of the ocean. A $5 entrance fee is required and gains you access to the grounds, a small shop and a clean bathroom. Tours inside the lighthouse can be obtained through Caribbean tour operator Chukka.