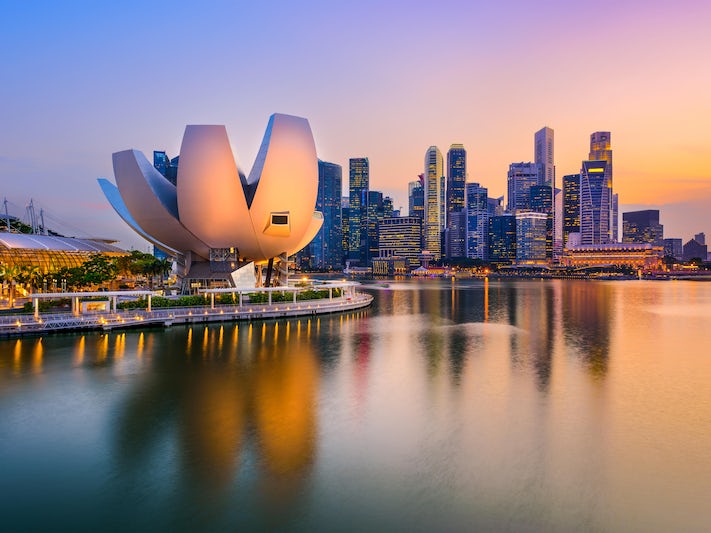 Find Things to Do in Singapore on Viator

Popular Things to Do in Singapore

Food and Drink in Singapore

Singapore offers great variety when it comes to its food, whether you're craving local Asian tastes at an authentic Hawker Market or gourmet dining.

Simply want to visit an international food chain? They are well represented and range from McDonald's, KFC and Starbucks to Coffee Bean and Hard Rock Cafe.

In Little India, you'll find all manner of Indian eateries.

On Orchard Road, there's a huge variety of eating places. One of our favorites is the food hall in the basement of Takashimaya, a Japanese department store.

Every day is a shopping day in Singapore, as the city is a well-established retail Mecca. Most malls and department stores are open daily from 10 a.m. to 9:30 p.m. (The Mustafa Center in Little India operates round-the-clock and has an awesome selection of cheap goods -- but no alcohol or books.)

Orchard Road, particularly at its junction with Scotts Road, is the place to start -- and possibly finish. (Take the MRT to the Orchard Road station.) The area offers a vast array of retailers, such as Tangs department store and the fantastic Kinokuniya, a vast bookstore that ranks as the most comprehensive in Singapore. Popular shopping centres also include the ION Orchard, Wisma Atria and Ngee Ann City. The last of which houses the Japanese department store Takashimaya (which even has a department of London's famed Harrods).

Take time to stroll at Boat Quay, which is a mixed development of old wharf houses (converted to commercial use -- mainly as restaurants) and modern skyscrapers of international corporations. During the night, Boat Quay is a bustling spot, with ethnic restaurants serving every type of Asian meal.

Close to Boat Quay, Esplanade -- Theatres on the Bay is undoubtedly the largest and most comprehensive performance arts venue in Singapore. Nicknamed the "Durian" by the locals, the complex resembles the round, spiky and notoriously pungent Southeast Asian fruit in its design. Located under the distinctive dome-shaped floors are a concert hall, theater, several recital rooms and an arts library, as well as an array of shops and food outlets. Esplanade also features an outdoor bar on the roof terrace, Orgo, which offers great views overlooking the bay.

Singapore is flat, so you can get a great view of the city from the SKAI bar on the 70th floor of the Swissotel Singapore. Across the street is a more famous spot for libations: the Singapore Sling was invented at Raffles hotel's Long Bar which is one of the most touristy spot in town.

Singapore's colonial district, which lies roughly between Boat Quay and the vast Raffles City shopping and hotel complex, is full of charm. Among the sites that hearken back to the city's English past are the Old Parliament House, the gorgeous Fullerton Hotel Singapore (which used to be the General Post Office), the Anglican St. Andrew's Cathedral and the Singapore Cricket Club.

Put your camera to work at the lush Singapore Botanic Gardens, a 120-plus-acre playground for nature lovers. The site features a rain forest, lake and all manner of gardens -- some showcasing medicinal herbs, others different types of ginger. The National Orchid Garden is there, as well. (There's no fee to visit the Botanic Gardens, but there is an admission charge for the orchid garden.)

The Singapore Zoo, one of many animal parks in the country, offers a chance for visitors to have breakfast with an orangutan. The zoo features more than 3,200 mammals, birds, reptiles and fish in its 70-acre park.

Singapore's Mass Rapid Transit (MRT) system -- in essence, a subway -- is a tourist attraction in its own right. It's the cleanest you'll ever see -- no trash and no graffiti. You buy tickets from an automated machine, so make sure you get cash from an ATM beforehand. You'll need to use S$5 (Singapore) bills or smaller. A good sample ride is the two-stop trip between Orchard Road and City Hall (for the colonial district).

A Singapore River cruise, starting from Boat Quay, offers dramatic views for just a few dollars. It takes you, among other places, to the Merlion statue, which is a symbol of modern Singapore. The 70-ton icon towers more than 28 feet (8.6 meters) and has a lion's head and a fish's body, resting on a crest of waves. The Merlion was originally designed in 1964 as the emblem of the Singapore Tourist Board.

Go to the beach. The only spits of sand in Singapore are located on Sentosa Island, but we'll warn you: Most locals don't actually swim there. Siloso, Palawan and Tanjong represent the popular beaches. (Siloso overlooks oil refineries on the opposite shore.) If you are looking for history, 1880-built Fort Siloso is the place to go. The ride over to the island on the cable car from the Harbourfront Centre is the best part of the outing. On the way, you'll see gorgeous views of the city and cruise ships docked underneath.

Visit Universal Studios -- Asian style. Sentosa Island has received a major facelift, with new hotels and attractions, including Universal Studios. Singapore's second casino and a Hard Rock Hotel also are located next to the studios.

Another exciting outdoor experience is the canopy walk in the Southern Ridges. The six-mile walk can be started from Mount Faber Park (conveniently close to the Singapore Cruise Centre). On the walk, you'll see the rich vegetation of Singapore and wild monkeys.