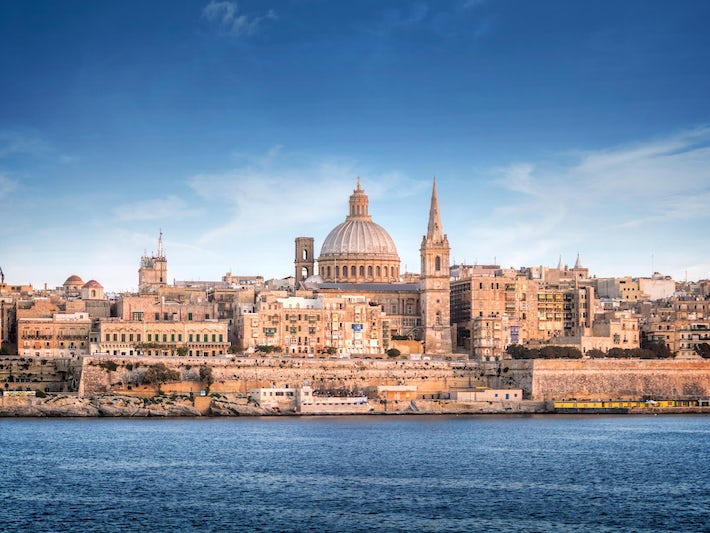 Popular Things to Do in Malta (Valletta)

When arriving in ancient Malta, an island nation located 50 miles south of Italy, cruisers are immediately greeted by its massive stone fortifications and the impressive, tall steeples of ancient churches. However, Malta is surprisingly contemporary once you're inside its walls. From where cruise ships dock in Valletta, passengers can take shore excursions to any number of historically significant sights including Fort Saint Elmo and Auberge de Castille, or visit the beautiful botanical gardens and stroll the streets to do a bit of shopping. If you're more interested in water-based activities, consider an excursion out to the Blue Lagoon off the tiny island of Comino for some swimming and snorkeling. It should be noted that many businesses and attractions surrounding Malta are closed on Sundays.

Malta's weather is mostly pleasant throughout the year, though it does rain a bit more during the winter months. Spring and summer are both excellent times to visit thanks to dry, sunny days. Maltese and English are the two official languages in Malta. The euro is the official currency.

Find Things to Do in Malta (Valletta) on Viator

Food and Drink in Malta (Valletta)

At the Port of Valletta, a picturesque string of cafes line the dock at Valletta's Grand Harbor; these range from the Hard Rock Bar Malta (which serves sandwiches) to Chinese and Italian. Lunching in Valletta can be casual and charming by sitting alfresco at one of the many outdoor cafes, or casual and cheap by purchasing Maltese pastizzi (flaky pastries filled with meats and peas sold at little kiosks).

Malata: To hang with Valetta's elite, try Malata. This "haute cuisine" dining spot in Valletta is more expensive than most restaurants but from all reports, it's worth it. This is where members of Maltese Parliament lunch. French and Mediterranean specialties include pasta, seafood and steak. (Palace Square; +356 21 233967; open noon to 2:30 p.m. and 7 p.m. to 11 p.m. Monday to Saturday)

Caffe Cordina: Malta's oldest and most celebrated outdoor cafe, Caffe Cordina, is located on the ground floor of the old treasury building. Most people dine outside, but if you choose to do that, take a moment to look at the inside of the restaurant, with its ornate murals and ceiling frescoes. (244 Republic Street; +356 21 234385; open 7:30 a.m. to 7:30 p.m. Monday to Saturday and 7:30 a.m. to 3 p.m. Sunday)

Xara Palace Hotel: A trip to Mdina wouldn't be complete without lunching in the grand restaurant at the 17th-century palazzo, now the Xara Palace Hotel. You can choose from its fine-dining restaurant or its trattoria for a more relaxed (and less expensive) experience -- perfect for families. (Misrah Il-Kunsil; +356 2145 0560 ; open for lunch and dinner ).

The Great Siege of Malta and the Knights of St. John: Join this interactive experience for a historic tour of the history of Malta, the Knights of Malta and the Great Siege of Malta, which was considered one of the key events in Europe in the 16th century. At entry, you'll be handed a portable CD player; you can choose from 11 languages and take the tour at your own pace. During this audio-visual presentation, you will join a group of pilgrims in 12th-century Jaffa, travel to Jerusalem, get attacked by Bedouins, meet the Knights during the Crusades and travel with them to eventually end up in Malta. The tour costs about six euros, lasts about 45 minutes and is located on Republic Street in the middle of Valletta -- barely putting a dent in your shopping and walking time.

Upper Barrakka Gardens: Take time to explore the gardens located at the edge of the Valletta shopping and dining area. The bluff-side location offers an incredible vista over the harbor and across to the Three Cities on the other side. The gardens are peaceful and beautiful and offer shady respites from the Mediterranean summer heat. Plus, the garden area features free Wi-Fi. The lift to the harbor and the cruise ship dock is located there, too.

St. John's Co-Cathedral: The odd designation "co-cathedral" refers to a church that shares its Bishop's seat with another. In this case, the designation was not applicable until the early 1800s, when the Bishop of Malta, whose seat is actually at the cathedral in Mdina, was allowed to use St. John's as an alternative when visiting in Valletta. Located near the center of Valletta, the austere exterior of the building belies its lavish interior, one of the finest examples of Baroque design in the world. This was the church of the Knights; it houses exquisite artwork, including Caravaggio's masterpiece, "The Beheading of St. John the Baptist." Wheelchair access is available in most areas of the cathedral. (Open 9:30 a.m. to 4:30 p.m. Monday to Friday and 9:30 a.m. to noon Saturday; around six euros)

Palace of the Grand Masters: Get another overview of the storied Knights of Malta, an internationally known Catholic fraternity, by visiting this grand old palace in Valletta with artwork and "apartments" from the period of the Knights. Many displays depict the Great Siege, and a room is devoted to Gobelin tapestries. The basement floor houses the Armoury, one of the largest collections of ancient armor in the world, with more than 5,000 examples from the 16th century on. (Open 10 a.m. to 4 p.m. Friday to Wednesday; 10 euros, includes visits to state apartments, armory and audio guide)

Republic Street: One of the main shopping streets in Valletta, it's fun to browse or just to sit and people-watch. Stop for a coffee, beer or a gelato in one of its leafy squares. Some of the cafes and stores offer free Wi-Fi.

Mdina: Ancient walled and moated Mdina, the "Silent City," is rich with history and architectural wonders. Take a bus out of Valletta to Mdina and its neighboring community of Rabat and wander through the medieval streets. It's a transforming experience because of its historical significance and because of the unique architecture and layout of the city. You can see the walls of the 10th-century "fortified belt" the Arabs constructed to isolate the city (at that time named Medina), and you can view the opulent homes and castles of the Maltese nobility who settled there during the time of the knights. You can also visit St. Paul's Cathedral, the Bishop's seat and center of religious life on Malta. It's a good idea to get a good guide book or tour guide or much of the historical significance and interest will be lost on first-time visitors. Cruise ships offer the tour as a shore excursion, but buses to Rabat and Mdina leave Valletta frequently, are reasonably priced and take about a half-hour to arrive.

Gozo: More placid and verdant than the island of Malta, Gozo is easily accessed by ferry, which takes approximately 30 minutes from Valletta Harbor. Check out the open-air flea marketat It-Tokk, the capital town of Victoria's main square. The Ggantija Temple, quite possibly the oldest manmade structure still standing in the world (built around 3600 B.C., more than a thousand years earlier than Stonehenge), is worth a visit.

Marsaxlokk: Take a bus to the quaint village of Marsaxlokk for a peaceful walk around the harbor and a terrific photo op of the colorful Maltese luzzo boats, with their curved prows and single eye painted on to safely guide fishermen. This is Malta's main fishing harbor; early in the morning, the streets are filled with open-air fish markets to showcase (and sell) the day's catch. If you don't like crowds, it's best to avoid the Sunday market. The bus ride takes 30 minutes; plan on two hours in the village.

Blue Grotto: A series of caves cut into rocks in the cliffs of Malta's breathtaking southwest coast, the Blue Grotto is accessible only via the sea. Visitors board six- to nine-passenger wooden motor boats for a 25-minute ride in and around the caves. There is no set schedule; the boats leave when filled. The grotto offers magnificent color. (Shades of the sea include beautiful blues and greens, and don't miss the fluorescent hues of more shallow waters around cave openings.) And, when your captain eases the boat inside a cavern and cuts off the engine, there's an eerie silence. The tallest of the arches rises some 140 feet; others, you can almost touch with an extended arm as your boat maneuvers through them. Plan to go early, around 9 a.m., to beat the busloads of tourists. It's located in the village of Wied iz-Zurrieq, about a 25-minute taxi ride from the cruise port. (Public buses are also available.) Most cruise lines offer boat rides among the caves as a shore excursion option from Malta's Valletta.