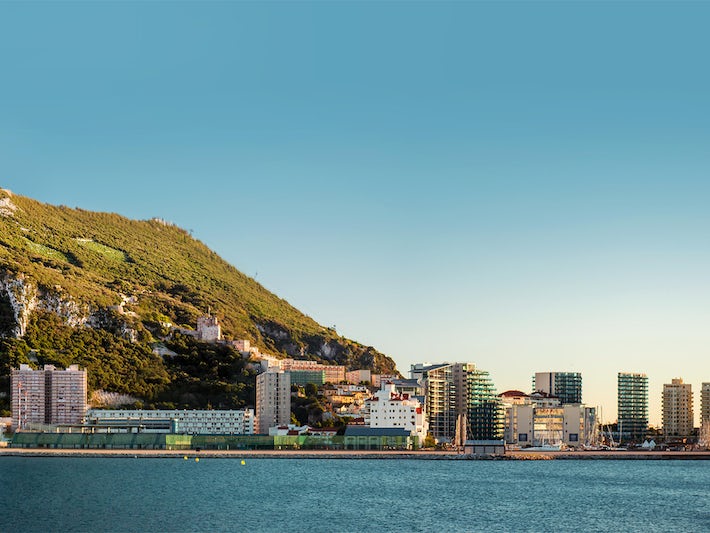 Find Things to Do in Gibraltar on Viator

Popular Things to Do in Gibraltar

Food and Drink in Gibraltar

Most of the lunch spots in the tourist areas of Gibraltar serve British "pub-style" food, but try to find one that serves Gibraltar's specialty dishes; calentita, a delicacy made from chickpea flour; pinchitos, which are meat kebabs cooked over hot coals; and torta de acelgas, a spinach tart. Also consider a walk around the seafront or marina to explore many little bars and pubs that have "proper tapas," the Spanish influence is quite evident and appropriate for this location.

Gibraltar's most famous cocktail is the John Collins. Ingredients are two shots of gin, a dash of angostura bitters, a dash of bitter lemon and lime juice, topped up with soda.

Star Bar: Located in Parliament Lane just off Main Street, Star Bar is the oldest tavern in Gibraltar. The menu offers burritos, burgers and breakfast all day, in addition to some delicious desserts. (12 Parliament Lane; +350 200 75924; open daily, 7 a.m. to 11 p.m.)

The Angry Friar: This pub offers traditional British fare -- steak and kidney pie and pints of ale -- and is located on the main shopping street with a big outdoor patio. (287 Main Street; +350 200 71570; open Monday to Sunday, 9 a.m. to midnight)

The Clipper: Located in Irishtown, this place serves pub fare and with British news channels on the bar's television, it attracts a great blend of locals and visitors. (Tuckey's Lane and Irish Place; +350 200 78666; open Monday to Saturday, 9:30 a.m. to 11 p.m.)

Gibraltar's most famous cocktail is the John Collins. Ingredients are two shots of gin, a dash of Angostura bitters, a dash of bitter lemon and lime juice, topped up with soda.

The Cable Car: You can take the cable car from Main Street to the top of the Rock and see both Spain in Europe and Morocco in Africa; the trip takes six minutes to ascend the 1,000 feet to the top and runs every 10 to 15 minutes throughout the day. Huge queues can form when cruise ships come into port. A top tip is to buy your tickets online in advance, and you can skip at least some of the queues. There is a restaurant, souvenir shop and pub at the summit. On your way up or down, you can stop to see the Barbary apes at "The Apes' Den," near the middle cable car station. Others can be seen at the top. The tailless Barbary apes will visit with you, but beware -- they love snatching purses, cameras, hats and sunglasses. Cost is about 15 euros for the round trip fare, including a stop to see the apes. (Main Street; +350 200 12760; open daily, 9:30 a.m. to 7:15 p.m.)

St. Michael's Cave: Also known as Cathedral Cave, the unique geophysical properties of Upper St. Michael's Cave, descending some 250 feet below the entrance, makes it ideally acoustic, and part of it is set up as a concert venue. These days, classical music is piped through for tourists, but the chambers are still used for concerts, solo performances and ballets. To enter, visitors need to purchase a Nature Reserve ticket at the ticket office. (St. Michael's Road; open daily, 9 a.m. to 5.45 p.m.)

Shopping: Gibraltar is tax-free, and the shopping is lovely. There are British stores like Marks and Spencer, Spanish stores, and some that are unique to this multiethnic community. Linens and Spanish mantillas (lace or silk shawls) are available in the main square at most reasonable prices; leather goods and clothing can be found along the pedestrians-only main street that winds its way to the Alameda Gardens at the foot of the Rock.

Lower St. Michael's Cave: A tour here is not for the faint of heart, nor for the physically challenged. It requires descending several hundred feet using ropes, pulleys, ramps cut into the stone and scary walks across slippery and narrow pediments. At the end of it, though, you come upon an underground lake surrounded with magnificent stalactites and stalagmites dating from millions of years ago. There is a small entry charge.

World War II Tunnels: Located halfway down the Rock, these tunnels were excavated between 1939 and 1944 by the Royal Engineers and a contingent of Canadian Engineers, and are an extension to The Great Siege Tunnels excavated during The Great Siege of 1779 to 1783. Guided tours here take around 40 minutes and take in static exhibitions and photographic displays. (Open Monday to Saturday, 9:30 a.m. to 5 p.m.)

Dolphin Spotting: Several companies (and cruise ship excursions) offer tours into the Bay of Gibraltar, where three species of dolphins (common dolphin, striped dolphin and bottlenose dolphin) live and play. Not only are you more than likely to come face to face with these exuberant mammals (or the occasional whale!), but it's also the best opportunity you have for taking photos of the Rock itself.

Diving: Gibraltar is surrounded by more than 30 wrecks and reefs and is a diving haven for experienced divers, but even novices can take a short "resort course" and go out for a few hours at shallower depths. If your ship is in port until late, night diving is also available.

Bird-watching: Multiple bird species are found migrating through the Strait of Gibraltar. If you are a nature lover, you will be entranced during a bird-watching outing that you will enjoy tremendously. Migrating birds are seen almost all times of the year. Depending on when you visit, you might see white storks, honey buzzards, short-toed eagles and various other species of sea and land birds. And Gibraltar has its own, the Barbary partridge, which, like the apes, can only be found there.