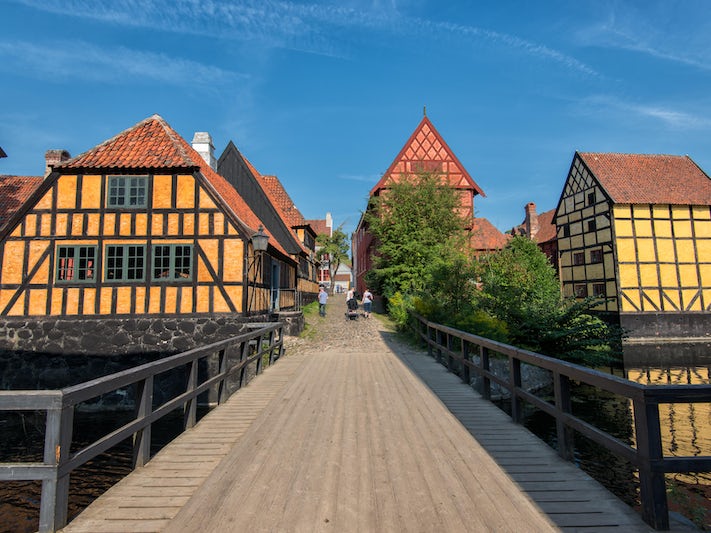 Find Things to Do in Aarhus on Viator

Popular Things to Do in Aarhus

Food and Drink in Aarhus

Unique restaurants and coffee shops abound in the town square. Try Teater Bodega (Skolegade 7, 86.12.19.17), a theatrical-themed restaurant with Danish country-style food. As cruise ships dock very close to the town center, less adventuresome or budget-conscious diners can easily scoot back to the ship for lunch.

Also, check out licorice ice cream, featured in the ubiquitous gelato shops throughout the town. The locals love it, but it is an acquired taste -- ask for a sample before committing to an entire scoop!

The University of Aarhus is set in a beautiful park and features several museums. A fun spelling fact: Aarhus is also from time to time written as Arhus, but the University still uses the more old-fashioned spelling with two A's. The name is pronounced more like Orhus (as in Oregon) than Aarhus.

Domkirke (Bispetorv, 86.12.38.45, 9:30 a.m. - 4:00 p.m., free), or the cathedral, was built from the 13th to the 15th century and is the longest church in Denmark. Its whitewashed nave is a splendid example of the stark nature of Scandinavian churches. Highlights include the chalk frescoes that almost whisper to visitors from the high arches and walls. Also of note are the carved wooden altarpiece, the bronze baptismal font from 1481 and the stunning Renaissance pulpit. Energetic visitors may climb the tower for a panoramic view of the surrounding city.

The Besaettelsesmuseet, the Resistance Museum, (Mathilde Fibigers Have 2, 86.18.42.77, 11 a.m. - 4 p.m. weekends and on Tuesdays and Thursdays from June 1 to August 31) reflects everyday life in the city during the Nazi takeover. Every country seems to have a different story regarding Germany and World War II. France was invaded and survived via Vichy, Finland was a "co-combatant" with Germany against Russia, and Denmark cooperated for a while after the Nazi takeover, but eventually turned to resistance. The museum contains lots of personal items from the townspeople, uniforms, Nazi and Danish propaganda, maps, and pictures of events as they unfolded in and around the city during the war. Displays also explain the slow transition to an active resistance movement. The exhibits are entirely in Danish, but a printed English guide provides easy navigation through the displays. The museum building itself served as Gestapo headquarters.

The Radhus (Radhuspladsen, 89.40.20.00, tour at 11 a.m. daily), the city hall, features a marble and glass space (and clock tower) that stylistically stands apart from the rest of the city's architecture. It is striking (or ugly, depending on your taste), and while the exterior is the main attraction, visitors may examine the inside during the daily escorted tour.

Den Gamle By (Viborgvej 2, 86.12.31.88, 9 a.m. - 6 p.m. daily) is an open-air museum about a mile west of the center of town. It has over 70 half-timber structures that have been moved from all over the country to recreate a provincial town as it looked in the 1700's. The buildings have been meticulously recreated, inside and out, with workshops, trade stalls and domestic interiors. Also featured are collections of clothing, textiles, furniture, cast-iron stoves, toys, silverware, delftware and porcelain, and musical instruments.

Visit Legoland Park, located in the Danish countryside near the town of Billund. The park is about 90 minutes from the piers, and visitors can see exactly what over 60 million Lego blocks can build, including miniatures of the White House and Mount Rushmore. There is also an amusement park with the usual distractions.

The garden island of Funen is a full-day excursion and is the birthplace of Hans Christian Andersen. Visitors can visit his home, which has been preserved as a museum. There is also an open-air museum with buildings from the 18th and 19th century, all preserved to mimic town life as it once was.

The Latin Quarter offers galleries and trendy clothing shops . The streets off of the town square are lined with small specialty shops featuring gourmet foodstuffs and fine wines. The Sondergarde is the main pedestrian mall. It gets crowded by mid-day, and visitors can wander along with the natives, shopping where the locals shop. Some of the more noteworthy stores in the Sondergarde are Georg Jensen (silversmith) at #1, Salling (department store) at #30, and Inspiration Buus (unique gifts of Danish design) at Ryesgade 2.