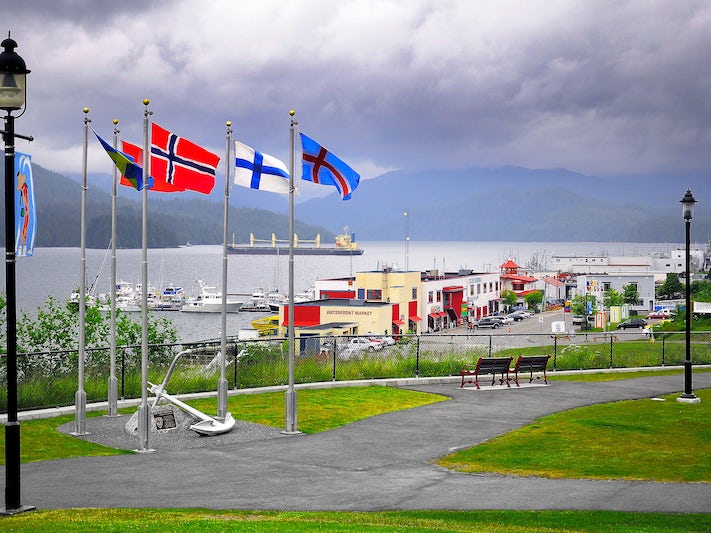 Find Things to Do in Prince Rupert on Viator

Popular Things to Do in Prince Rupert

Food and Drink in Prince Rupert

For an elegant outing, the Waterfront Restaurant in the Crest Hotel (222 West 1st Ave, 1-800-663-8150) offers British Columbia cuisine on the waterfront.

Cowpuccino's Coffee House (25 Cow Bay Road, 250-624-6090) is known for its homemade soups and sandwiches plus coffees, ice cream and muffins, all made on the premises.

If you've had it with cruise-ship cuisine and want something different, try the Vietnamese offerings at Herbie's Family Restaurant (679 2nd Ave. W., 250-624-3965). And if you are there early enough, try the $2.99 (CAD) breakfast special, which equates to about $2 USD.

Cow Bay got its moniker as a result of dairy cattle brought to the region in 1906. At that time there were no docks built, so the cows had to swim ashore. What had been Cameron Cove became known as Cow Bay as a result, and this waterfront area is now a fun shopping district with historic buildings and unique architecture. Many of the shops and restaurants are built on pilings right on the water.

The First Nations Carving Shed (1-800-667-1994), located just a block from the Museum of Northern British Columbia, features artists and carvers of the region. Watch as they create everything from sculpture and totems to jewelry, working with silver, copper, cedarwood and gold; you can purchase items from these individual artists as well.

Whale Watching Tours are a major draw here because the Prince Rupert area is home to the largest concentration of humpbacked whales in North America. But that's not all you'll see on these tours. If you visit earlier in the season (May to July), it's likely that your excursions will find several pods of orcas, and at any time you are likely to see eagles, dolphins, sea lions and other marine life in close proximity. Information on several different tours can be found at www.cruisetoprincerupert.com.

The North Pacific Historic Fishing Village (1889 Skeena Drive, Port Edward), located 12 miles south of Prince Rupert, is a true "company town." That company is the oldest-standing salmon cannery in British Columbia, which illustrates life in the region for fishermen and the industry they created. There is also an artist colony with resident artists, a restaurant, a cafe, daily performances and guided tours.

Go kayaking or canoeing around Venn Island (Seashore Charters, 800-667-4393). Led by First Nation guides, these three-hour excursions take visitors around Venn Island in either two-person kayaks or traditional 12-person ocean canoes, and include a traditional Tsimshian snack in the village of Metlakatla. Minimum age is 10.