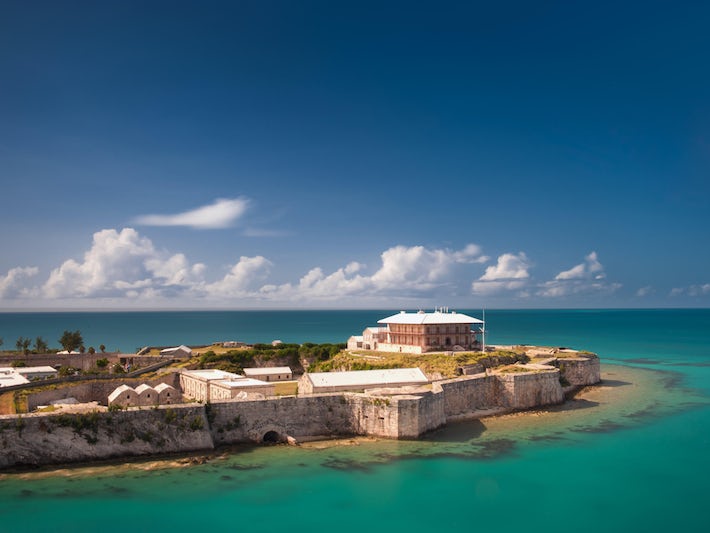 Find Things to Do in King's Wharf on Viator

Popular Things to Do in King's Wharf

Food and Drink in King's Wharf

You'll find plenty of traditional dishes like fish chowder laced with black rum and hot peppers, or hashed shark. And definitely order anything made with their fabulous Bermuda onions. One aspect of Bermuda we find refreshing is its lack of fast food. One Kentucky Fried Chicken stands on the island, and it was erected prior to regulations that were passed to prevent famous venues like McDonald's and Berger King from taking up residence.

Henry VIII: The roast duck will have you purring. Their pub rocks after 9 p.m. with live entertainment. (open daily, noon to 10 p.m.; South Shore Road, Southampton)

Somerset Country Squire Tavern: One of the best in Bermuda for seafood. Curried mussel pie is the winner here. (open 11 a.m. to 10 p.m. Sunday to Wednesday, and 11 a.m. to midnight Thursday to Saturday; Mangrove Bay)

The beaches are small when compared to most found in the U.S., ranging from as narrow as 15 yards to as wide as half a mile. Set your mind on idle and let the sun go to your head on pink-tinged sands that seem to melt into the sea.

Note: Bermuda's Guide to Beaches and Transportation is free at all visitor centers and most hotels.

Church Bay: Off the beaten path, and superb for snorkeling. Rent what you need elsewhere. No changing rooms or restrooms. Southampton.

Mangrove Bay: Once a smuggler's cove, there are two beaches, but only one is public. The calm waters are perfect for kids and non-swimmers. A favored spot for landscape artists. No changing rooms or restrooms. Near Somerset Village.

Elbow Beach: Swimming and body surfing are the draws here, but the crowds, not so much. Restrooms, snacks. Paget.

Bermuda Arts Centre: Formerly opened by the late Princess Margaret in the early 80s, you'll find works by a gaggle of local artists. In-residence artists include a cedar sculptor, a wood carver and a jewelry designer. Of course, most everything is for sale. (open daily, 10 a.m. to 5 p.m.; Freeport Road)

National Museum of Bermuda: Filled to the brim with recovered treasures from the island's shipwrecks. Also check out the Commissioner's House. Built in the early 1800s, you'll enjoy this brilliantly restored home that offers great views from the verandas. Exhibits include antique maps and coins as well as an excellent one on slavery. (open daily, 9:30 a.m. to 5 p.m.; Royal Naval Dockyard)

Old Cooperage: A former barrel-making factory built in 1831, it is home to the Bermuda Craft Market. You can stroll through numerous stands displaying the works of local craftspeople, including wood carvings and miniatures. (open daily, 10 a.m. to 5 p.m.; Royal Naval Dockyard)

Dockyard Glassworks: Visit here to see beautiful gift items made from glass while you wait, in their 2,000-degree furnace. (Open 9 a.m. to 5 p.m., Monday through Friday, and 10 a.m. to 5 p.m., Saturday and Sunday; open until 7 p.m. every day a ship is in port; Royal Naval Dockyard)

Fort Scaur: Built in the 1870s to protect the Royal Naval Dockyard because the British feared an attack from the U.S. Commanding views of Ely's Harbour and Great Sound if you stand on the ramparts. It's a nice place to stroll. (closes at 4:30 p.m., but the grounds stay open until sunset; Scaur Road, Sandys)

Gibbs Hill Lighthouse: This is the oldest cast-iron lighthouse in the world. Although there's a 185-step climb to the top, the panoramic view of Bermuda and its shoreline from the balcony makes the exertion worthwhile. (Open 9:30 a.m. to 4:30 p.m., Monday to Saturday, and 10 a.m. to 4:30 p.m. Sunday and holidays; Lighthouse Road, Southampton)

Heydon Trust: Named for the unpopular 17th-century Governor Jeremy Heydon. A staunch Puritan, he was charged with treason at the age of 80. Acquitted a few years later, he established the trust, and all the land remains intact today on 40-odd acres of magnificent, undeveloped countryside offering splendid water views. In addition to being a bird sanctuary, the grounds include fruit groves, gardens and a tiny 1620 chapel, which is overseen by three nuns who sing Gregorian chants in Latin at services (open Monday, Tuesday, Thursday and Friday, 7:30 a.m. & 3 p.m.; Wednesday and Saturday, 3 p.m.; Somerset Road, Sandys)

Somerset Bridge: A 17th-century bridge to Somerset Island -- it's the world's narrowest drawbridge with barely a 19-inch mast clearance. The bridge will also give you a bird's eye view of Cathedral Rocks, aptly named for the natural rock formation that evokes images of a medieval cathedral.

Skyrider Parasailing: It's easy to take off for a chair parasail ride built for two from the rear of a Para-Nautique powerboat. So easy, it's even safe enough for kids. (open Tuesday to Sunday, 10 a.m. to 5 p.m.; 441-234-3019; Watersports Centre, Royal Naval Dockyards; operates May to October)

Somerset Village: A postcard-pretty village that might look familiar. It was featured in the 1962 film, "A Touch of Mink," with Cary Grant and Doris Day. Enjoy the short walk to Mangrove Bay from here. There are a few Front Street outposts here.

Snorkel Park: The best attraction is the Seascooter Safari. For all ages and swimming abilities, it's an electric scooter ride on the water. You can also rent gear and snorkel the well marked trails. (Royal Naval Dockyard)

Spithead House: Built by Hezekiah Frith, who's best remembered for his hidden bounty from two stolen ships and the kidnapping of a French woman he hid from his wife. Local lore says they haunt the house. The house was once the home of Eugene O'Neill (his daughter Oona was born in it) and Sir Noel Coward and Charlie Chaplin (after marrying Oona). (not open to visitors, but fun to pass by; Harbor Road, Warwick)

Golf: Bermuda is a major destination for duffers, boasting more golf courses per square mile than any other place on earth. Below is a partial list. Hint: Although they're available for purchase, golf balls are astronomically expensive. Bring your own.

Southampton Princess: An 18-hole par 54 course designed by Ted Robinson. Carts are mandatory and included in the greens fees. You can book up to seven days in advance. (441-238-0446; Southampton)

Mid-Ocean Club: The best you'll come across. Rated one of the best in the world. C.B. Macdonald-designed 18-hole par 71. Private, but allows visitors Mondays, Wednesdays and Fridays. You can book tee times up to 24 hours in advance. (441-293 0330; St. George's)