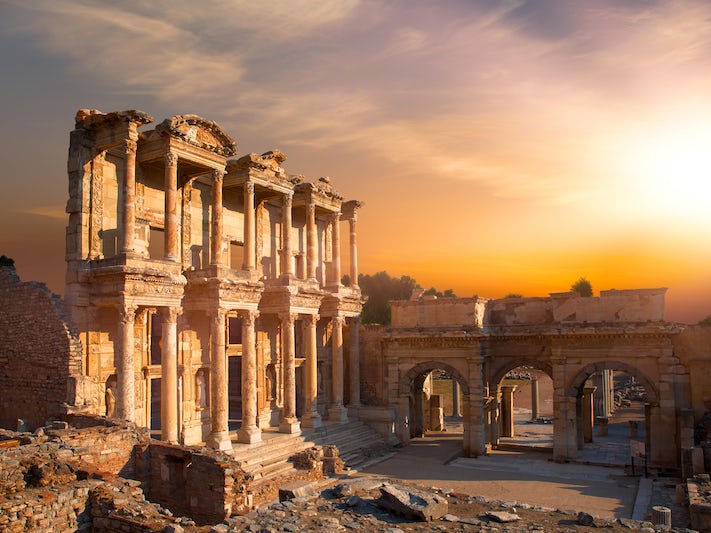 Find Things to Do in Kusadasi on Viator

Popular Things to Do in Kusadasi

Food and Drink in Kusadasi

Kusadasi's waterfront is the best place for everything from a quick snack to fresh fish. Try the cheese rolls -- a traditional Turkish mezze that consists of phyllo dough surrounding ricotta cheese.

There is a handful of waterfront cafes from which to choose, but locals insisted we try Kazim Usta (16B Balicki Limani), just to the left of the cruise terminal. Specialties include calamari and sea bream.

We also like waterfront Ali Baba, where you select your fish to be grilled from the market out front. Good starters include the garlic humus and the eggplant salad. (Belediye turistik carsisi Number 5)

For a world-away experience, try Secret Garden. The restaurant is tucked away in, yes, a small garden right by a yacht marina; the stuffed calamari is a specialty. (Setur Marina, Akyarlar Mevki Yat Limani)

A trip to Ephesus is a must. It's the best-preserved ancient city in the Eastern Mediterranean and a magical place that enthralls even those who normally find rubbernecking around ruins a bore.

The Virgin Mary is believed to have visited there between 37 and 45 A.D. The two-story library once contained thousands of scrolls, and the Terrace Houses display intricate mosaics and colorful frescoes. The fabulous Temple of Cybele at Artemis -- which Alexander the Great visited during its construction in 334 B.C. -- was one of the seven wonders of the ancient world.

Note: Prepare carefully for a trip to Ephesus; the site gets very crowded and extremely hot in the summer months, so take plenty of water, sunscreen and hats. There are restaurants near the site, and full-day cruise tours will include lunch.

If not visiting Ephesus via a shore excursion, your taxi will drop you at one end and (by prior arrangement) pick you up at the other.

Often included in tours to Ephesus and definitely not worth missing is a visit to the House of the Virgin Mary, located atop Nightingale Mountain (Bulbul). It's a humble, one-story brick house that, by myth, is supposed to be the place where she spent her last years. Discovered in 1880 by a German nun with a vision, the house has been visited by countless folks on pilgrimages, including two popes. Sometimes included with an Ephesus tour is an excursion to the Basilica of St. John. Many believe that St. John spent his last years near Ephesus and was buried in the area. The small church built over his grave site in the 4th century was turned into a basilica in the 6th century.

To discover "old" Kusadasi, just head north along the shop-lined and pedestrianized main street (Barbaros Hayrettin Caddesi), and when you reach the top, it's easy to get directions to the main market and the ancient Kaleici neighborhood. It's a network of narrow streets crammed with bars, restaurants and atmosphere. You can even sample a hamam, or Turkish bath.

These have been modernized and are more expensive than they once were, but you can still get the full works for a reasonable price. Try the Kaleici Hamami (to the right, off Barbaros Hayrettin Caddesi, but ask for directions).

If you've done Ephesus, there are additional ruins to see. Spend a day at Aphrodisias. Dating back to the third millennium B.C., it was home to residents who worshipped the goddess Aphrodite. As you may recall, she stands for all that concerns love and nature. The Roman Stadium is the best preserved ruin, and the lovely setting on an 1,800-foot plateau is a great place for a relaxed stroll.

Additional ancient sites frequently seen together because of their proximity to each other are Priene, Miletus and Didyma. At Priene, the most northerly of the three sites, located 18 miles from Ephesus, view the remnants of the Temple of Athena and portions of the city walls. Miletus, 14 miles from Priene, is known for its large amphitheater. Didyma contains the ruins of the 120-columned Temple to Apollo.

Tired of ruins and rugs shops? Then relax outdoors. Kadinlar Denizi, also known as Ladies Beach for its topless bathers, is the closest to Kusadasi -- just 2.5 kilometers south of town. You can take a minibus or taxi from the port along the waterfront road. It's a pleasant place to bathe and soak up some sun, but it does get crowded in peak season. For lunch, try some of the hotels' beach bars.

Another option is a brisk walk to Guversin Adasi (Pigeon Island), reachable via a causeway and topped by a small stone fort. There, you can stroll through scenic woodland to a hilltop cafe that offers snacks and alfresco lunch with a view.

You can also spend the day at the Dilek Peninsula National Park, also called Milli Park, about 23 kilometers south of Kusadasi. Enjoy beaches, swimming, hiking, biking trails and strolls through forests. Just outside the park gates is Degirmen (Davutlar), a sprawling park and restaurant.