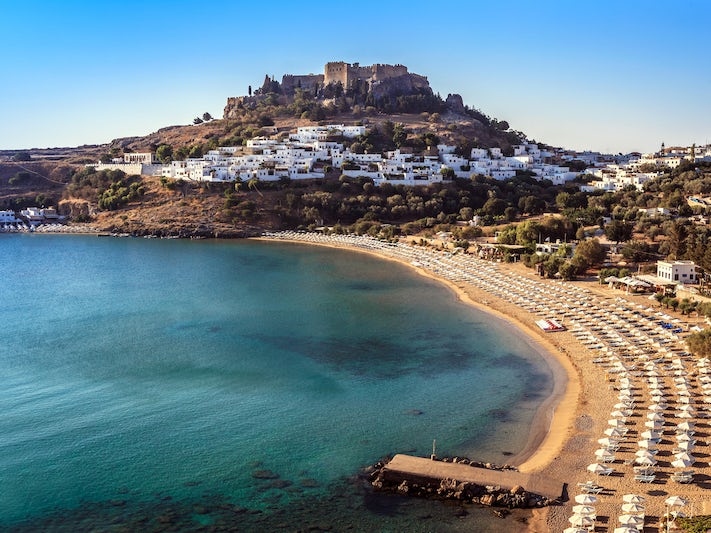 Find Things to Do in Rhodes on Viator

Popular Things to Do in Rhodes

Food and Drink in Rhodes

Rhodes is filled with charming Greek tavernas, both in the Old Town and New Town. You can sit at outside tables and enjoy the extraordinary cuisine of the region. Bread, olives and olive oil, dishes made with cereals, vegetables, dried fruit, fish, chicken and seafood are staples of the area. Try pourgouri, small balls made of veal, onions, tomatoes and olive oil. Small plates with appetizers such as olives, hummus and grape leaves are often served at restaurants in the area.

Make sure you check menus before ordering and know exactly what you want. Sometimes water will come with a charge, or waiters may misinterpret your request for a small beverage and substitute a higher-priced item.

Dinoris is one of the best lunch spots. It serves delicious fish dishes at outside tables; swordfish and grilled prawns are excellent choices. For dessert, try the baklava. You can choose from a la carte or set menus and enjoy free Wi-Fi with your leisurely meal. (Mouseou Square 14a, Old Town; open daily, noon to midnight)

Mavrikos is the best fish restaurant in Lindos. It is located on the Main Square and highly recommended by the locals. Snapper is the specialty there, and the oven-baked lamb and steamed eggplant are also tasty menu selections. (open daily, noon to midnight)

The Palace of the Grand Masters is the main tourist attraction in Old Town. Once a fortress, then home to a number of Grand Masters who oversaw the Knights of Rhodes, it's now a museum, containing mosaics and artifacts from medieval and ancient Rhodes. (Open daily, 8 a.m. to 8 p.m., in the summer; open Tuesday to Sunday, 8 a.m. to 3 p.m., in the winter)

The Jewish Museum of Rhodes is located in the Kahal Shalom synagogue; both it and Rhodes' Jewish Quarter date to the first century A.D. The museum contains an interesting history of the Jewish population of Rhodes and artifacts of its prior civilization. (8 Simmiou Street; open Sunday to Friday, 10 a.m. to 3 p.m.; open by appointment in the winter months)

The Byzantine Museum, originally a church in the 11th century, showcases frescos and art work dating from the 12th century. (Apelou Street; open Tuesday to Sunday, 8:30 a.m. to 3 p.m.)

Mandraki Harbor is the meeting place of locals, and the link between Old and New Towns. Check out the yachts and excursion boats in the harbor. The Nea Agora (New Market) features gift shops, bars and cafes.

Elli Beach, at the northern tip of Rhodes town, is a beautiful beach with clean, crystal blue waters. It is often crowded but worth the trip for beach lovers. You'll find beach umbrellas, canteens and beach lounges.

Shopping opportunities abound. For the best deals -- and the most fun -- head for Sokratous, which runs parallel to the Street of the Knights in Old Town. Shops there sell rugs, ceramics, jewelry and leather goods. For more shopping, head to the Nea Agora, which features gift shops galore.

Lindos, once the most important town on the island, is a national historic monument. Its acropolis sits some 116 meters above sea level on a cliff overlooking the sea. Below is a sandy (albeit crowded) crescent-shaped beach that's bordered by alfresco restaurants, and beautiful 17th-century whitewashed houses are scattered haphazardly up the hillside. While there, it's worth taking a look at the lovely 18th-century frescoes in the Agia Panagia church, which dates from the 15th century. You can also walk up the steep steps to the acropolis -- you can hire a donkey to take you part of the way, and it's worth the effort for one of the best views in Greece and the chance to explore the tiny Temple of Athena, which dates from the fourth century B.C. Lindos is about 55 kilometers from Rhodes and is reachable by bus or taxi.

Kallithea Springs, situated in the district of Kallithea, nine kilometers from the city of Rhodes, is one of the most romantic and charming spots on the island. The springs at Kallithea were known in Ancient Greece for their curative properties. After years of neglect, Kallithea Springs was restored in 2007. The remarkable architecture, magnificent mosaics, picturesque bay with crystal clear waters for swimming and a lively restaurant make for a memorable visit.

Ialysos was one of three famous ancient cities in Rhodes. It is home of the ruins of the ancient Greek temple of Athena. During the Byzantine era, the hill was used as a natural fortress. A monastery dedicated to the Virgin Mary was built there in the 13th century. The view from the hill of Philerimo in Ialysos overlooking Rhodes is worth the visit. Visitors will see the ruins of the ancient acropolis and the restored monastery.