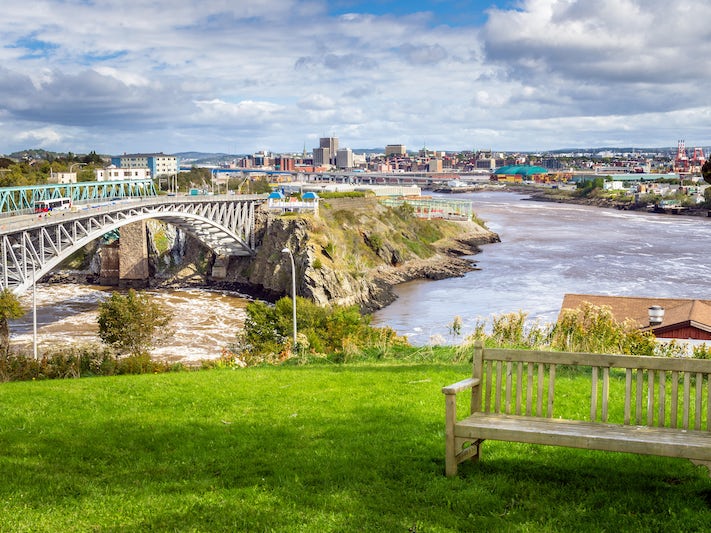 Find Things to Do in Saint John (New Brunswick) on Viator

Popular Things to Do in Saint John (New Brunswick)

Steamer's Lobster Company couldn't be more convenient. It's on Water Street, across from the ship terminal. You'll get an authentic seaboard spread, served outdoors on picnic-style tables with umbrellas. Lobster is the house specialty, but don't miss the bucket o' mussels, served with a platter of lemon wedges and drawn butter. There's even a "lounge singer" that serenades customers during their meal.

If you really want some traditional food, peruse the stalls at the Saint John City Market. Several vendors have set up small dining areas with tables and counter service. Fish and chips and all types of chowders are the most popular offerings. But you'll also find crepes and traditional British fare, such as pasties and sausages.

Java Moose Coffee Roasters is your spot for a cup of joe or a cappuccino. They are a locally owned and operated coffee chain with lunch specials. You can also find Canada-themed gifts and free Wi-Fi.

Uptown Saint John, just steps from the cruise terminals, is bustling with activity. If you're looking for souvenirs, you have two major shopping options: Brunswick Square and market Square. For boutique shopping, venture down most side streets to score vintage items, record stores, and used books, among other finds.

The Reversing Rapids is an amazing natural phenomenon that results from a confluence of two distinct forces: the highest tides in the world, courtesy of the Bay of Fundy, and the origination point of the Saint John River. When the two meet in a rocky gorge, the high tides overpower the river, causing it to reverse its flow twice a day. Fallsview Park, as its name implies, is the lookout point to observe the churning waters below. You can experience the falls by jetboat or simply watch from the observation point.

The Saint John City Market on Charlotte Street is the oldest farmer's market in Canada. The market's roof is shaped like an inverted hull of a ship, a testament to the city's shipbuilding history. A stroll through the market is a true sensory experience, with stalls of produce, fresh fish, meats, cheeses, flowers and prepared foods lining the building. There's also a stand selling a local specialty, dried seaweed, called dulse.

The King's Square Bandstand is located in picturesque King Square at the top of King Street. Drenched in history, it occasionally hosts musicians and street performers, who entertain during the lunch hour. Stop by to check it out and snap a photo or two.

If you've already experienced the town's highlights, visit Moosehead Brewery, Canada's oldest independent brewery. It's also the home of Moosehead Beer, and it has a great country store that's filled with one-of-a-kind souvenirs.

Step outside the heart of the city, and take a walk on the ocean floor at Hopewell Rocks or St. Martin's Sea Caves, where you can actually see the world's highest tides in action.

If you're a lover of art or history, the New Brunswick Museum, near the terminal, is worth a visit. If independent galleries are more your speed, you'll find a host of them throughout Saint John, featuring local art.

To satisfy your sweet tooth, wander over to Barbour's General Store, which carries Victorian-era delicacies like dulse and molasses. You can also find local information in this authentic building, circa the 1800s.

The Saint John Police Museum offers a look at the city's past through the eyes of a police officer. This venue is ideal for history buffs who want to learn more about the force's 164-year history.