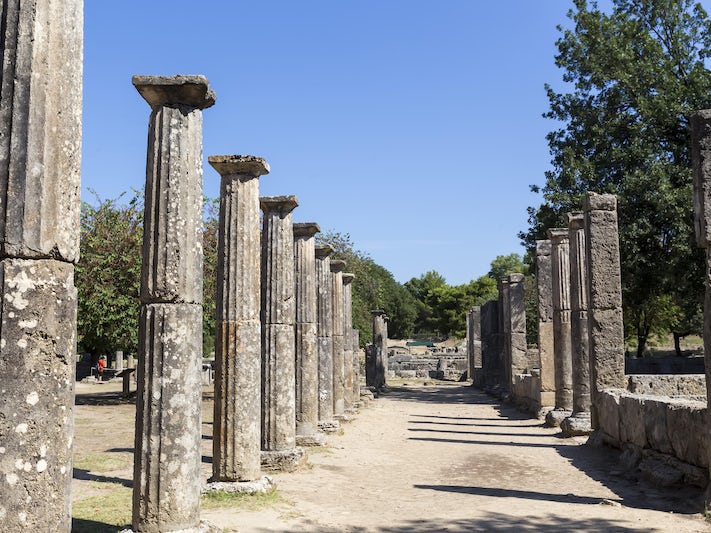 Find Things to Do in Katakolon (Olympia) on Viator

Popular Things to Do in Katakolon (Olympia)

Food and Drink in Katakolon (Olympia)

In Katakolon, the tavernas and cafes line the waterfront, serving traditional Greek dishes, including pastitsio (a baked casserole with ground meat, pasta tubes and bechamel sauce), moussaka (meat sauce layered with eggplant and topped with bechamel sauce), gyros (meat sliced from a vertical rotisserie and tucked into pita bread, usually with salad and sauce), souvlaki (grilled skewers of meat and vegetables), grilled meats and seafood and appetizer dips including tzatziki (yogurt with cucumber and garlic), taramasalata (made with salted and cured fish roe) and melitzanosalata (roasted eggplant, garlic, olive oil and lemon).

Vegetarians will be happy to know there are usually plenty of options, including stuffed zucchini, eggplant or peppers, Greek salad (cucumbers, tomatoes, onions and feta cheese) and the dips mentioned above.

You might wander along the Katakolon waterfront to choose one of the many restaurants with a view, or try one of the options listed below. Wherever you eat, be aware that "Greek time" may be more casual than you're used to, with service that is likely to be slower than back home.

Aegean: Located in modern Olympia (which borders the archaeological site), this tavern serves generous portions of fresh, local fare, including gyros, moussaka, souvlaki, grilled meats and fish, Greek salads and classic Greek appetizers, including tzatziki and taramasalata. They also have a good selection of vegetarian dishes. The robust Wi-Fi is a bonus. (G Duma 4 [a diagonal street off the main road], Olympia; 30 26240 22540)

Ambrosia: To catch a quick bite or drink, just up the hill from the Archaeological Museum, this is a good spot -- though it's pricier than the dining options a short walk away in the town of Olympia. Stick to the gyros or other light fare. You'll be able to check on the arrival of your tour bus, since the restaurant is a stone's throw from where buses pick up returning passengers.

Jimmy's Taverna: Although it's not on the waterfront, this Katakolon restaurant serves generous portions of classic cuisine, including octopus and meats cooked over a charcoal grill, fish soup, Greek salad, gyros and fried calamari. The one downside is the slow service, so beware if you're not in the mood to linger. There's also free Wi-Fi. (On the second street back from the water, just before a church; 30 2621 041514)

Knisa: For affordable gyros, souvlaki and Greek salads right at the harbor, this no-frills spot does the trick. Tuck in and enjoy the view. (Katakolon waterfront; 30 26214 00390)

You might want to give traditional Greek alcohol, like ouzo (anise-flavored), masticha (liqueur flavored with resin) and tsipouro (distilled from grapes, like grappa), a try. Bartenders can also mix up riffs on traditional cocktails using the local tipples -- for example, the Mediterranean Sunset, with ouzo, orange juice and grenadine.

Best Nearby Beach: Plakes Beach (also known as Renata Beach) is just on the other side of Katakolon's jetty -- a short walk of about 200 yards. It is a small, pebbly beach with a relaxed beach bar sporting palm-frond umbrellas. Amenities include changing rooms and a shower. Check with locals to find out whether jellyfish are offshore.

Best Beach for Scenery: If you want to spend several hours soaking up the sun, head to Agios Andreas Beach. This arc of sand fronts crystal clear waters, with trees and greenery in the background. It's located just a couple of miles north from the port, about a five-minute drive. There are a couple of cafes overlooking the beach, with umbrellas if you need a respite from the fierce Greek sun.

Best Beach for a Scene: A bit further away (about 12 miles or a 25-minute drive north from the port), Kourouta Beach is the locals' favorite. It offers clean sands and clear waters, with abundant bars, cafes and restaurants. You'll find umbrellas, changing rooms and showers. You also might encounter a beach party, particularly on a Sunday.

Ancient Olympia Archaeological Site: You might be surprised to learn that the original Olympic Games were tied into religious rites -- thus, some of the most impressive architecture at the site includes temples dedicated to Zeus and his wife, Hera. The area was originally a sacred grove, then a sanctuary to the god Kronos (father to Zeus). Later, in 776 B.C., the first Olympic Games were held, and they continued until 393 A.D., when they were halted by the Christian emperor Theodosius, who ordered a ban on all pagan cults.

After a 40-minute drive from the port, tour buses pull up to the archeological site's parking lot at the foot of Mount Kronion. You'll walk about a quarter-mile to the site entrance, passing the ticket booth along the way. Horse-drawn carriages are available for a modest fee if you'd rather ride than walk. The ancient site was ravaged over the years, first by earthquakes and then by two nearby rivers, which flooded and changed course, burying everything in silt. The remains have been unearthed, although -- due to earthquake risk -- archaeologists have chosen to reconstruct only a rare few columns. Still, wandering with a good guide amid tumbled pillars, passageways, partial statues, steps and stones, you might imagine the eons-old games nearly ready to begin.

Note: The Olympic site is very sunny, and it's recommended that visitors wear a hat or carry an umbrella, wear lots of sunscreen and bring water. In fact, in ancient times, spectators died due to the summer heat. (Off of Ethnikos Odos 74, Olympia; 30-26240-22517; hours vary by season)

Among the key structures to see are:

The Palaestra: Athletes trained here and anointed themselves with olive oil in the side chambers; it's now defined by rows of columns.

The Temple of Hera: This temple once held a huge statue of the goddess, and it's also where the exquisite statue of Hermes by Praxiteles (now in the museum) was found. In front of the remains, the Olympic flame of the modern games is lit (using sunlight and a lens).

The Temple of Zeus: This massive structure once contained the nearly 40-foot-high gold-and-ivory seated statue of the god. Huge sections of columns lie where they've fallen and a tall pedestal outside the structure was once topped by a statue of Nike (goddess of victory), now in the museum.

The Stadium: On the way to the stadium, you'll pass a hill which once housed an elaborate Roman-era fountain system and treasuries where offerings were stored. Then you reach the remains of a vaulted passageway that leads to the stadium. The oval stadium is surrounded by grassy slopes, where as many as 20,000 spectators (all male) sat. You can still see the stone starting and finishing lines, separated by a distance of about 581 feet. Competitors in the ancient games had to be Greek, born free (not slaves) and without criminal convictions. The oldest contests were foot races, but eventually the challenges grew to include warrior races in full armor, a pentathlon, wrestling and more. (Chariot races were held in a nearby hippodrome, which has been obliterated by floods.) As with the modern games, revived in 1896, the original games took place every four years. But in the ancient games all competitors were male and competed in the nude. The winner's reward was an olive wreath said to be from a sacred tree planted by Hercules.

Pheidias' Workshop: Once the building where the sculptor Pheidias crafted the huge statue of Zeus; a Byzantine church was later constructed in the ruins.

Archaeological Museum of Olympia: Located in the archeological complex but requiring a separate admission (combined admission tickets for the site and the museum are available), the museum safeguards many of the statues, sculptures and figures found on the Olympic grounds as well as bronze helmets, breastplates and clay votive figures. A model of the site presents a bird's-eye view of the layout of ancient Olympia.

The museum contains remarkable sculptures and reliefs carved by the era's greatest artists. The two most famous statues are the Nike of Paionios, whose gown seems to flow in the wind, and the Hermes of Praxiteles, holding the infant Dionysus, carved of fine Parian marble. Another room contains the reconstructed pediments from the Temple of Zeus. The two triangular sections are at eye level, giving you a sense of just how massive the temple must have been. On the east pediment, the figures and horses illustrate preparations for a legendary chariot race; the west pediment depicts the battle of the Centaurs and the Lapiths. In the same room, smaller stone plaques, or metopes, illustrate the labors of Hercules.

Museum of the History of the Ancient Olympic Games: This fascinating museum is located before the archaeological site entrance, in a modern structure built in Hellenistic style. You'll pass it on your right, up a hill, shortly after the bus drop-off area. While it's not always included in shore-excursion tours, the museum is well-worth visiting if you're interested in the ancient sports. You'll find excellent displays featuring implements -- discuses, stone weights used in the ancient long-jump, strigils used to scrape olive oil off the skin and more. There are also urns and mosaics depicting various sports, plus some bragging inscriptions by athletes. Here, too, detailed descriptions are provided in English. (Off of Ethnikos Odos 74, Olympia; 30-26420-29107; hours vary by season)

Temple of Apollo Epicurius: This impressive Doric temple was built in the fifth century B.C., and is one of the best-preserved Greek temples. Unfortunately, its remote location is 55 miles southeast from the port, requiring a drive of about an hour and 45 minutes. Many of the interior friezes and sculpture fragments are now displayed in the British Museum. (Bassae; 30-26240-22529; hours vary by season)

Clermont (Chlemoutsi) Fortress: Located about 30 miles northeast of the port (a 50-minute drive), this imposing castle, completed in 1223, was occupied and modified by a series of conquerors through the ages. You can take in spectacular views from atop the walls and visit the jousting courtyard, chapel and ceremonial halls. (Kastro-Kyllini, Ilia; 30-22610-95033; hours vary by season)

Domaine Mercouri Winery: About 10 minutes, or 2.5 miles, from Katakolon, the Domaine Mercouri winery, a family estate, was established in 1860 and occupies 23 acres. If it's not too hot, this is a pleasant and peaceful outing on a gracious country estate, where some 40 peacocks stroll. Tours include the original winery building with its old wooden presses, bundles of socks used to dust the plants and the wooden crush buckets. Yes, they stomped on the grapes in their bare feet. In the new winery, the guide shows you the stainless-steel tanks, the wooden barrels for aging and the temperature-controlled wine cave, a cool spot on a hot day. Afterward, enjoy a tasting of red and white wines, accompanied by cheese and crackers in the shade of tall trees. Wines are available for purchase at the winery's shop. The winery is located in the village of Korakochori. (GR-271 00 Korakochori, Ilia; 30-26210-41601; open Monday to Saturday, 9 a.m. to 3 p.m.)