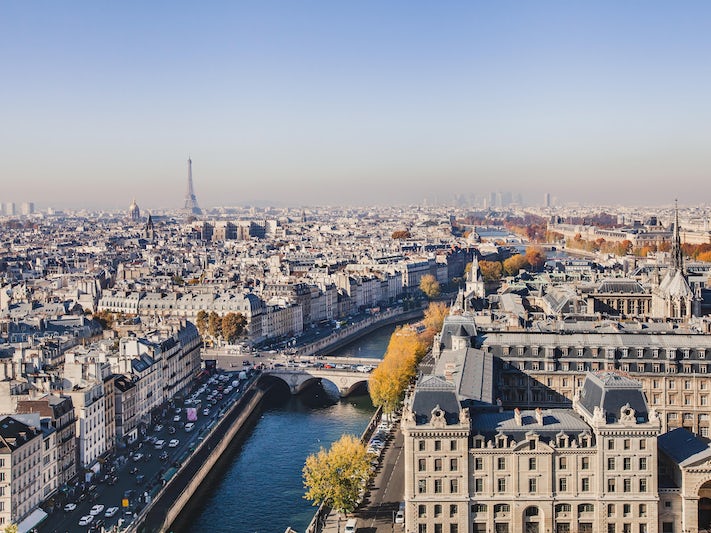 Popular Things to Do in Paris

The City of Lights is one of the most visited cities in the world and for good reason. Paris offers a certain je ne sais quois -- sights like the Eiffel Tower and the Arc de Triomphe, the incredible bread and pastries, and the city's world-class museums are just a few reasons to visit. The actual city of Paris is a bit of a distance from the cruise port in Le Havre -- and the city is quite large -- so a shore excursion might be the best option on single-day stops. Cruisers can enjoy excursions to the city's famed open-air food markets, shop high-end fashions and antiques or simply spend hours strolling the historic streets.

Paris enjoys mostly mild weather, with winter temperatures rarely dropping to freezing and summer highs hardly ever above 80 degrees Fahrenheit. Light rain is fairly common year-round. The euro is used in France and the official language is French. Though many locals might speak or understand some English, it's best not to assume.

Find Things to Do in Paris on Viator

Food and Drink in Paris

Jacques Genin : Usually sends his fresh-everyday chocolates off to the George V, Crillon and Hediard. Now he welcomes customers into his tiny workshop. (18, rue St.-Charles, 15th)

Classic sights like the Tour Eiffel, Notre-Dame, the Arc de Triomphe and Sacre-Coeur will always lure visitors. Add the Champs-Elysees, the Bateau Mouche along the Seine and strolls through the Tuileries to the mix -- and it's easy to see why nobody visits just once.

What's 7000 tons and has 1,665 steps and 10,000 light bulbs? Eiffel Tower! This breathtaking landmark was built by Gustave Eiffel (Did you know he designed the framework for the Statue of Liberty?) for the 1889 Universal Exhibition to commemorate the centenary of the French Revolution and was opened by the Prince of Wales, who later became King Edward VII of England. Open 9:30 a.m.- 11 p.m. and 9 a.m. - midnight late June - August. (Champ de Mars)

Moulin Rouge has been putting on its famous show since 1889. Of course, being immortalized by Henri Toulouse-Lautrec and known for the risque can-can didn't hurt either. It's still fabulous with plenty of feathers, sequins and, of course, gorgeous semi-naked showgirls. Open every night with two shows, 9 and 11 p.m. Dinner and a show begins at 7 p.m. (82, bld. de Clichy; +33 (0) 153 098 282)

Musee du Louvre is the world's greatest art museum -- so it really doesn't matter if you've been here before since there's no chance you've seen it all. Collections divide into Asian antiquities, Egyptian antiquities, Greek and Roman antiquities, sculpture, objets d'art, paintings, and prints and drawings. Obviously, the top attractions (and most likely the ones you've seen) are the "Mona Lisa" and the 2nd-century "Venus de Milo". Open Monday, Thursday, Saturday and Sunday 9 a.m. - 6 p.m., Wednesday and Friday 9 a.m. - 9:45 p.m. Closed Tuesday.

Note: Avoid the never-ending lines to enter through the Pyramid. Instead, come in from the Carrousel de Louvre mall on rue de Rivoli or, even better, through the Louvre's Metro stop.

The 164-foot Arc de Triomphe was planned by Napoleon to celebrate his military successes, but wasn't finished for another 20 years after he took a trip to Elba. It has some magnificent sculptures, and the names of Napoleon's generals are inscribed on the stone facades. There is a small museum halfway up the arch devoted to its history (you can actually climb to the top). France's Unknown Soldier is buried beneath, and the flame is rekindled every evening at 6:30 p.m. Open April through September 10 a.m. - 11 p.m. and October to March 10 a.m. - 10:30 p.m. (Champs Elysees -- use the underground tunnel on avenue de la Grande Armee side of the circle or access tunnel from Wagram exit of Metro)

Although it's probably easier to take the elevator up to the top of the Eiffel Tower, you can also climb 387 steps up to the south tower of 12th-century Cathedrale Notre-Dame de Paris for a nice view of the city. It was here in 1804 that Napoleon crowned himself emperor and then crowned Josephine as his empress. The cathedral is open year-round from 8 a.m. until nearly 7 p.m., but the towers and crypt usually don't open before 9:30 a.m., and they close before 6 p.m. (place du Parvis-Notre-Dame)

Musee d'Orsay is in fact a magnificent 1900 railway station that now houses a superb collection of Impressionist art from 1848-1914, including major works from Degas, Monet, Renoir, van Gogh and Gauguin. If you don't have lots of time, browse the upper level to see the enormous railway clocks in addition to some of the museum's best exhibits. Open daily (except Monday) 9:30 a.m. - 6 p.m., until 9:45 p.m. on Thursday. (1, rue de la Legion d'Honneur)

There's little left of the Bastille and its remains are pretty much surrounded by a neighborhood filled with an array of popular cafes, clubs and the Opera Bastille, completed in 1990. The Colonne de Juillet dominates la Place de la Bastille, marking the site of the prison which was stormed at the start of the French Revolution in 1789.

In the 16th century, 30 windmills were built in Montmarte for winemaking and milling grain, but only two remain today. Wander the back streets, away from the main square and souvenir shops. At dusk, sit on Basilica of Sacre-Coeur's top steps and watch Paris indeed become the City of Light. The basilica is dedicated to the Sacred Heart of Christ and the crypt contains what many believe to be Christ's sacred heart. By the way, when its 19-ton bell tolls, you not only hear it, you feel it!

Paris Walks offers two- and three-hour walking tours that range from the Latin Quarter to Hemingway's Paris. It's a great way to get up close and personal. (12, passage Meunier; 01 48 09 21 40)

Chinatown in Paris? Who'd have thought! It's actually an amazing way to spend an afternoon. In particular, browse the aisles at giant Asian supermarkets along avenue d'Ivry such as Tang Freres packed with dried mushrooms, Vietnamese lemongrass, canned litchi juice and powder water chestnuts. A must-do for finding those ingredients you can never seem to find for a recipe (as long as it's canned or sealed, it's fine for getting through Customs back home). Take-out is available if you feel like munching on spring rolls rubbed with fresh mint as you explore the neighborhood. Just south of place d'Italie in the 13th.

Head for the rue de Bac for smart shops and a bit of neighborly biographic history. Edith Wharton lived around the corner on the rue de Varenne at Nos. 53 and 58; the Prime Minister's official residence is at No. 57 on Varenne. The chapel of the Miraculous Medal, where Catherine Laboure was said to have visions of the Virgin in 1830, is at 140, rue de Bac.

Faubourg St-Honore pays homage to glamour, fashion, high style and the world's most expensive shops and galleries -- and the President's Palace.

Paris Roller lets you skate with 10,000 locals any Friday at 10 p. m. along a three-hour police-escorted route. Not up to the challenge? Then watch! It's the most incredible sight to behold. The 17-mile event is strictly for experienced skaters.

Serious shoppers who want to make the most of a day (or two) in Paris should take a shopping tour; several companies, including Chic Shopping Paris, offer different options.

Rue Furstenberg: Amazing fabric from Braquenie, Pierre Frey, Manuel Canovas, or visit Musee Delacroix -- the former home of the 19th-century painter, who lived and worked at this studio apartment. (6th)

Note: Refunds are almost non-existent, so shop mindfully. In most department stores, you will be handed a "bill" to pay at the cashier (sometimes a long walk away) before getting your items. By French law, sales take place twice yearly (January, July). They're amazing and the long lines form outside the swankiest shops on day one. To avoid fines, some stores (mostly department stores) mark some racks as "specials" or "just in," but it isn't all that common.