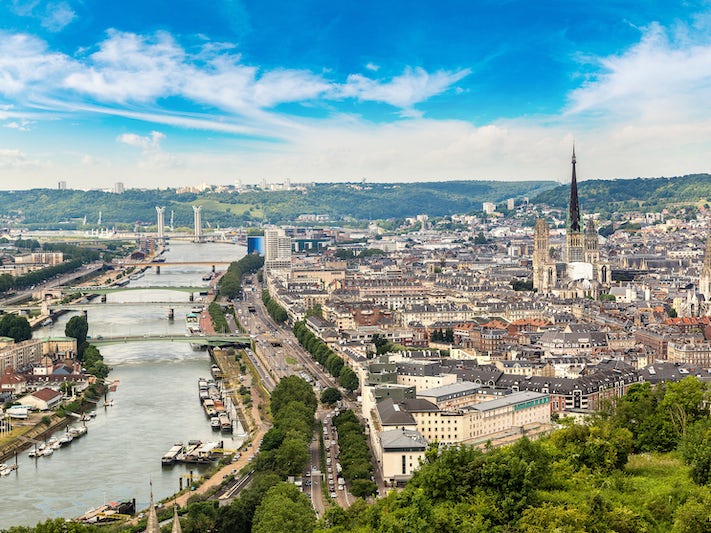 Find Things to Do in Rouen on Viator

Popular Things to Do in Rouen

Food and Drink in Rouen

Keep in mind that restaurants are closed for anywhere from two to four weeks during August, so it's best to check ahead.

In Rouen:
Restaurant Gill is part of the exclusive Relais & Chateaux network and the divine lobster fricassee with wild mushrooms is a treat along with the Seine views. Open for lunch Tuesday - Saturday noon – 1:45 p.m. Closed two weeks in April and three weeks in August. (8-9, quai de la Bourse; 02 35 71 16 14)

City Tours: A good way to get a feel for Rouen is to take one of its walking city tours (you can sign up at the city's tourist office -- see Hanging Around). Another option for a tour past charming half-timbered houses and Gothic churches is Petit Train. It runs daily from April to October, departing every hour from 10 a.m. – noon and 2-5 p.m. from Cathedral Square. It's a 45-minute guided tour in French and English through all the tourist areas of the city.

Musee des Beaux-Arts is great for perusing an outstanding collection of Impressionist paintings, including a Monet of the cathedral. Open daily, except Tuesday, 10 a.m. – 6 p.m. (esplanade Marcel Duchamp; 02 35 71 28 40)

Consecrated in 1063, the Notre-Dame Cathedral of Rouen truly is a sight to behold. Its Tour de Beurre houses 56 bells and the iron and bronze Tour Lanterne (Lantern Tower) raises majestically almost 500 feet/150m above. Check out the Booksellers' Stairway to see the stained glass window dating back to the 16th century. Richard the Lion-Hearted is entombed in the Chapelle de la Vierge. Open Monday 2 – 6 p.m., Tuesday – Saturday 9 a.m. – 7 p.m., Sunday 8 a.m. – 6 p.m. From November to March it is closed noon – 2 p.m. except Monday and Sunday, and closes at 6 p.m. (Place de la Cathedrale; 02 35 71 51 23)

As a result of being bombed during WWII, the Archbishop's Palace stands unprotected against the sky. Check out the broken rosette windows where crowds witnessed Joan of Arc's trial. You'll find it behind the cathedral. (place de la Cathedrale)

Dieppe: A popular seaside resort for Parisians during the 19th century, it's a sweet town dotted with a castle, aquarium and stately cliffs. It's fun to watch fisherman sell scallops and turbot straight from the boats then pick a nearby restaurant along the quai Henri IV, to enjoy the day's fresh catch.

Honfleur: An old fishing village, it's one of the most beautiful places in France. Just walking along boulevard Charles V to see the 18th-century waterfront houses is a treat in itself. For a yummy respite, try L'Assiette Gourmande on quai de Passagers. It's the only Michelin star restaurant in the region. Don't forget to browse the antique shops.