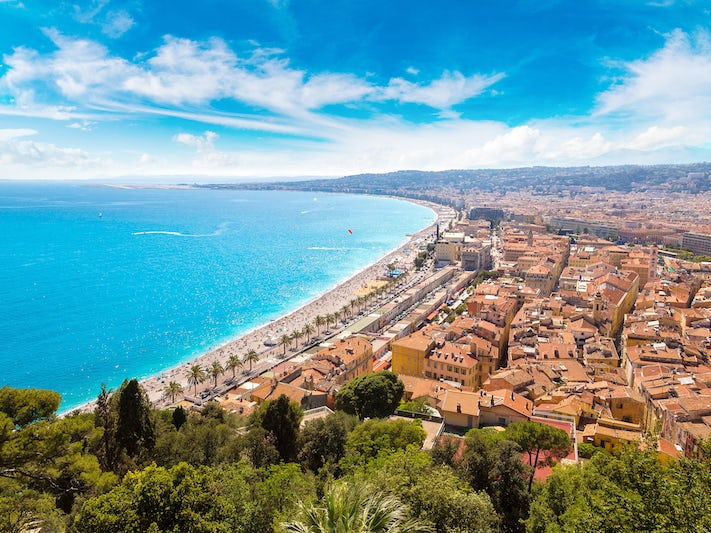 Find Things to Do in Nice on Viator

Popular Things to Do in Nice

Food and Drink in Nice

France is the home of wonderful food and the Riviera is no exception. Another plus of this sunny region is that its cuisine features plenty of healthy Mediterranean Diet options like Salade Nicoise; ratatouille (vegetable stew, fabulous with crusty bread and red wine); mussels poached in white wine, fish soup and stuffed sardines.

Only slightly less healthy and very delicious local specialities are Pissaladiere (onion tart with anchovy filets and black olives) and Socca (a flatbread made from chickpea flour and drizzled with olive oil). After all that healthy food finish your meal with cherry or chocolate-filled crepes flambeed in Grand Marnier, and some delicious local cheeses like Banon, a goats cheese from Northern Provence which is wrapped in chestnut leaves.

TIP: If you love French cheese so much you want to take some home and have time to visit Cannes, make a bee-line for Fromagerie Ceneri (22 Rue Meynadier / 33 4 93 39 63 68 /). House specialities include truffle brie, calvados camembert and goats cheese with basil.

Good for Star Spotting; La Petite Maison in the Old Town is known as a celebrity hang-out; locals say Elton John and Beyonce have both been spotted there. Pricey but with a good reputation for food (especially fish dishes). (11 rue Saint Francois de Paule; 04.93.92.59.59; Open daily, noon to 3 p.m and 7:30 p.m. to midnight.)

Cheap & Cheerful: Check out the indoor/outdoor restaurants which run along the Cours Saleya, near the market.

In a place this sophisticated -- and the country which is home to fine cognac -- it has to be a Brandy Alexander, a smooth-as-silk combination of cognac, crème de cacao, cream and grated nutmeg.

A stroll along the famous Promenade des Anglais, a seven-kilometre stretch of palm-lined boulevard with glorious Belle Epoque buildings on one side, the magnificent Bay of Angels on the other and the winding streets and red roofed 17th and 18th century houses of Vieux Nice only footsteps away.

A look inside the fabulous Negresco Hotel, the Promenade's most famous building, which has been the haunt of the royal, wealthy and famous since 1913 and houses a magnificent 6,000-piece art collection. If you have time, have a drink in the lovely walnut-paneled Le Relais bar, which hosts Jazz and Latin music evenings on most nights of the week.

A wander around Nice's Cimiez Quarter, a largely residential district just up the hill from the Nice Ville station (take the number 15 bus from Place Massena). Here you'll find some glorious Belle Epoque houses, the remains of a Roman bath and an ancient amphitheatre. There's also the Monastere de Cimiez, a 17th century Franciscan Monastery with pretty gardens, and two must-see museums for art lovers: the Matisse Museum, featuring much of his work, is set in a 17th century Italian villa (164 Avenue des Arenes de Cimiez; 33 4 93 81 0808; Wednesday to Monday, except public holidays, 10 a.m. to 6 p.m.); and the Musée Marc Chagall (Avenue Docteur Ménard; 33 4 93 53 87 20; Wednesday to Monday, except public holidays; 10 a.m. to 5 p.m. from November to April; 10 a.m. to 6 p.m. from May to October).

TIP: The French Riviera Pass (24 hours, 48 hours and 72 hours) is worth investing in, as it combines some sightseeing bus tours with entrance to many top attractions in Nice and other Riviera destinations. You can buy one at any local tourist office.

Get all starry-eyed in Cannes. Even when the famous film festival's not in town, this place has charm by the bucketful. For more details, read our Cannes Port Profile.

Step back in time at some of the beautiful medieval towns and villages which stud the foothills behind the Riviera, like Eze, a gorgeous jumble of stone houses, tumbling fountains and dappled squares. You must climb a steep hill to enjoy its fragrant and colorful Jardin Exotique but it is worth it to take in breathtaking views of the Mediterranean. Menton, which lies near Monaco and about a mile from the Italian border, is also worth visiting, not least for its cosy cafes and fragrant boulangeries. Artist and filmmaker Jean Cocteau was a great fan of Menton and the town has returned the compliment by dedicating a museum to him (; Open every day from 10 a.m. to 6 p.m. except on Tuesdays and some public holidays 2 Dock Monleon / 33 (0) 4 89 81 52 50). 13th Century St. Paul-de-Vence is another jewel: its shop-lined main street runs the length of the village, and near the main gate (La Porte Royale) you'll find the cemetery where the artist Chagall is buried.

Follow your nose to Grasse, perfume capital of the world since the 16th century. It lies, appropriately enough, amid purple lavender fields and meadows sprinkled with wildflowers. Queen Victoria loved Grasse so much she spent several winters here at the grand home of the Rothschild family. You'll fall in love with it too, after a stroll round its atmospheric 17th century Old Town and a look around the 10th to 17th century Notre Dame de Puy Cathedral, which contains three paintings by Reubens. If you've time, do visit the Perfume Museum; it charts the 3,000-year history of perfume and holds many fascinating antiques, including Marie Antoinette's valise. (8, Place de Cours; Open every day from 10 a.m. to 6 p.m except Tuesdays and public holidays.)

A trip to Monte Carlo shouldn't break the bank, as it's only a short bus hop from Nice. For must-sees, check out Cruise Critic's guide to Monaco.