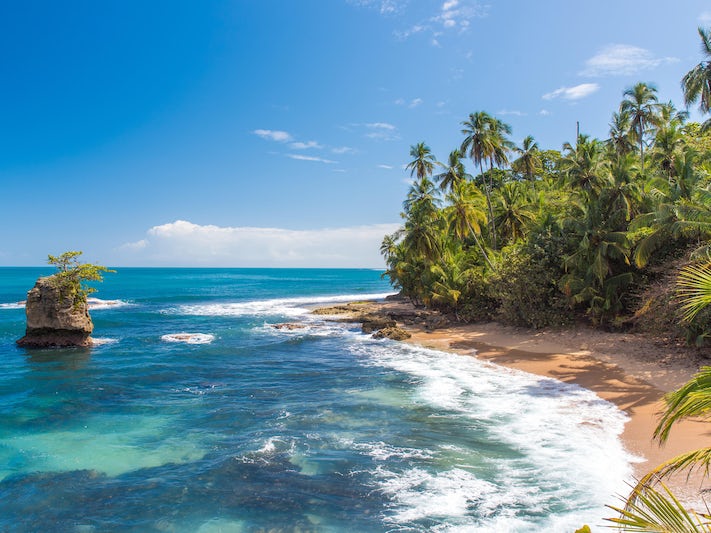 Find Things to Do in Puerto Limon on Viator

Popular Things to Do in Puerto Limon

Food and Drink in Puerto Limon

An ongoing influx of other nationalities -- from Jamaican to Chinese -- has created a variety of influences on the dishes served in Costa Rican restaurants. Look out for Food Soda (small restaurants) serving favorite local meals of casado (rice, beans, stewed beef, fried plantain, salad and cabbage); Gallo Pinto (pre-cooked and seasoned rice and beans with eggs, sour cream and a soft corn tortilla); Sopa negra (black beans and poached egg); and picadillo (meat and vegetable stew). Other, more international-style restaurants (often in hotels) in Limon and nearby Moin serve good seafood among other more recognizable dishes.

The Tortuguero Canals, a national park created in 1975 to protect the spawning areas of the green turtle (Tortuguero) and the region's rich flora and fauna stretching from Moin to the Colorado River near the border with Nicaragua. On a slow-moving boat trip along the canals (some natural, some manmade), you will see sloths hanging upside down from the overhanging trees, many different types of bird including toucans and probably monkeys and crocodiles, too. Unforgettable.

Worth the trip to Limon alone -- the Aerial Tram ride at Rain Forest, a 1,000-acre nature reserve next to the Braulio Carrillo National Park. This is one of two such centers run by a private foundation (the other is of a smaller scale and nearer the Pacific Coast). Towers, which were inserted into the jungle from the air by helicopters to minimize their impact on the site, support cables along which converted ski-lift gondolas carry six people (five passengers plus one of the center's excellent English-speaking guides). These are well spaced out and travel silently at just over one mile per hour so you can soak up the atmosphere and the unique experience of being up among the treetops of a rain forest.

This is not a zoo or Disney experience so don't expect to see animals -- nobody feeds the monkeys so you'll be very lucky to see any -- but you will see birds and hundreds of butterflies, and learn fascinating facts about this living, breathing forest. This trip will be a ship's tour but it is possible to do it independently. It's a two-hour journey and entrance costs about $50 -- you will, though, find that tour groups are given precedence for gondola places.

You've also got to see Cahuita National Park, which is another nature reserve but with the added bonus of beaches and coral reefs for swimming and snorkeling.

If you've tried and enjoyed the aerial tram in the rain forest, chances are you'll love the Canopy Tour -- although this is definitely not for the faint of heart. Based on some NASA technology, this involves traveling Tarzan-style (except in slow motion) through the rainforest canopy on a series of horizontal traverse cables.

Introduced in Costa Rica by the Original Canopy Tour company in 1997, this is now spreading to other Caribbean and Central American countries as well as to different parts of Costa Rica. The nearest site to Limon is Pacuare, between the coast and the central mountain range (Talamanca). Tours can be booked from the Limon cruise terminal.

Just as spending time on the beach is really a waste at this destination (although there are some good ones around) so is shopping, especially as there is not a lot to buy. The best option is to look out for locally-made ceramics, wood carvings and figures or any other items sold where at least some of the money will go to the charities and foundations set up to preserve the environment in the places you will be visiting.