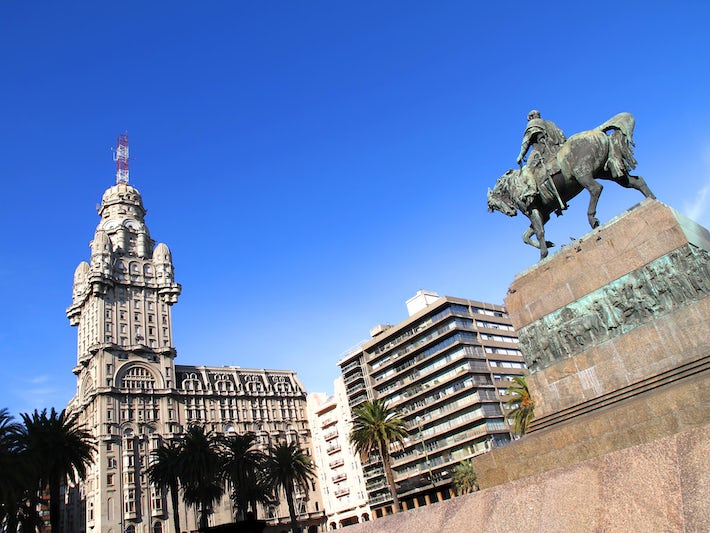 Find Things to Do in Montevideo on Viator

Popular Things to Do in Montevideo

Food and Drink in Montevideo

In Montevideo, you'll find excellent seafood and steaks rivaling Argentina's. The signature local sandwich, the high-calorie chivito, is (depending where you order it) a steak sandwich topped with a fried egg and cheese, and any combination of bacon, ham, mayo, olives, lettuce and tomatoes. You might say it is Montevideo's version of the Philly cheesesteak; there's just as much back and forth throughout the city on proper preparation and where to get the best of the best.

For a Traditional Experience: Try a confiteria, where you can get everything from sandwiches and salads to incredibly decadent pastries and even wine, beer and liquor. These are scattered all over the city.

For a Chic Experience: Try La Corte, which has a fabulous atmosphere and specializes in regional cuisine with a nouvelle touch. (Peatonal Sarandi 586; open Monday to Saturday 12 p.m. to 3:30 p.m.)

For a Contemporary Experience: Estrecho is a contemporary take on the concept of a luncheonette. All seats are at the counter of this narrow establishment with sleek decor, and quiet jazz plays on the sound system. The local food, using fresh, seasonal ingredients, is delicious and simple; try the sarandi ensalada or spinach salad with bacon and the chicken curry baguette. They also feature Uruguayan wines. Note that they do not accept credit cards. (Peatonal Sarandi 460; open 12 p.m. to 4 p.m. Monday to Friday)

While Montevideo isn't a beach destination unto itself, it's a city with some great beaches. So if sun and swimming are your things, check out one of these stretches of sand. Both have bathrooms and restaurants nearby.

Pocitos: This popular beach is the place for swimming or picking up a beach volleyball game. Take bus #104 from the port.

Ramirez: This beach is within walking distance of the port and Old City by heading west. It sits in front of the lovely city park, Parque Rodo.

The main square in the new part of the city, Plaza Independencia, is anchored by a monument of national hero Jose Gervasio Artigas. (His ashes are contained in a mausoleum under the equestrian statue.) Artigas led the battle for independence against Spain and was the first statesman of the Rio de la Plata Revolution. Look for Citadel's Gate, which was part of an elaborate defense system in old Montevideo; this reproduction was built in 1959, on top of the original gate's stone base. Palacio Salvo, once the tallest building in South America, overlooks the square.

From Plaza Indepencia, you can access Avenida 18 de Julio, one of the city's main thoroughfares and a street lined with stores and cafes. Along this street at number 998, you'll find Museo del Gaucho y de la Moneda, which features exhibits of gaucho (cowboy) clothing and artifacts, and a collection of currency used throughout the country's history. Admission is free. Antiques shops selling textiles, furniture, knickknacks and jewelry abound on the nearby street of Tristan Narvaja.

In the Ciudad Vieja area, the main square is Plaza Constitucion, home to a weekly (Saturday) flea market -- though enterprising locals will set it up on an off-day if cruisers are in town. Visit El Cabildo, the old town hall that also served as the city's jailhouse in the 19th century. It's on the corner of the Plaza Constitucion and Sarandi Street, a pedestrian street with outdoor sculptures. It's now a museum housing the city's historic archives, as well as maps, photos, antiques, costumes and artwork.

Montevideo's Congress Building was constructed between 1908 and 1925 in colorful marble and ornate woodwork. (Closed on Sundays)

The Torres Garcia Museum has seven floors devoted to the works of Joaquin Torres Garcia (1874-1949), perhaps Uruguay's most famous artist and the founder of Constructive Universalism. Torres Garcia is known for his Cubist paintings and iconic portraits of historical figures. He encouraged other Latin American artists not to renounce their heritage. (In the Old City at Peatonal Sarandi 683)

If golf is your passion, hit the links right in Montevideo at the Club de Golf de Uruguay also known as the Punta Carretas Golf Club, after the fashionable neighborhood where it is located. The par-73, 18-hole course has great views of the Rio de la Plata. On Mondays, nonmembers can use the greens free of charge. (Boulevard Artigas 379)

On the southern tip of Uruguay lies Punta del Este, a seaside resort for upscale vacationers from the country, the continent and across the globe. (Madonna and Leonardo DiCaprio are among them.) Consider it the Saint-Tropez of the Southern Hemisphere. There are white-sand beaches for swimming and water sports, hotels and restaurants, plus outdoor activities that include golfing, biking and horseback-riding. (It can take about two hours to reach the resort.)