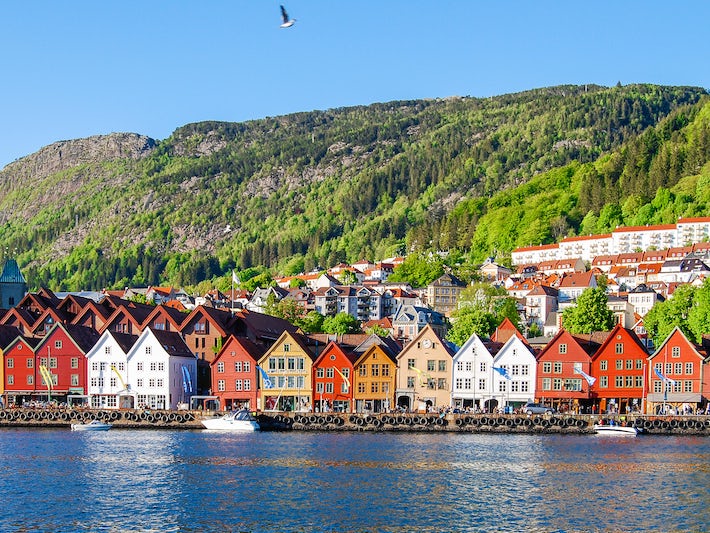 Find Things to Do in Bergen on Viator

Popular Things to Do in Bergen

Food and Drink in Bergen

Bergen, like most places in Norway, is heavy on seafood, given its proximity to the sea and access to fresh fish, shrimp and even whale. Reindeer is also a staple. True to its personality as a city with a welcome mat out to all nationalities, it also offers a dizzying range of international cuisine choices:

Bolgen & Moi: Set in an old bank, this establishment offers an upscale ambience that's equal parts trendy and classic. You can sit directly in front of the building's original vault as you dine on delicious fish selections and scrumptious desserts. (Open for lunch Monday to Saturday, 11 a.m. to 5 p.m., and Sunday, noon to 5 p.m.; Vagsalmenningen 16, 5014 Bergen; +47 55 59 77 00)

Pygmalion: This little cafe has a personality all its own, complete with checkered tablecloths and art hung on exposed brick walls. Set on a cobblestone side street, just a five-minute walk from the port area, it offers an organic menu of salads and sandwiches that are ideal for lunchtime. Plus it offers outdoor seating for use on nice days. (Open daily, 9 a.m. to 11 p.m.; Nedre Korsskirke allmenning 4)

Sostrene Hagelin: If you're craving something quick, this is Norwegian fast food, but it's delicious (and much healthier than what you'll find in the historic building across the street, which now houses an inconspicuous McDonald's). Choose from items like wraps, burgers, balls, soups and cakes -- all containing some type of fish. (Open Monday to Thursday, 10 a.m. to 8 p.m., Friday and Saturday, 10 a.m. to 4 a.m., and Sunday, noon to 6 p.m.; Kong Oscars Gate 2, 5013 Bergen; +47 55 90 20 13)

Peppes Pizza: Norwegian pizza? You bet! This homegrown chain has a handful of outlets around Bergen Town Centre. And it's a real bargain. A mere handful of kroner will get you a small pizza and drink. Open all day.

Bryggeloftet & Stuene: If you want to try traditional Norwegian cuisine in a lovely wharfside location, this classic in Bryggen is where it's at. Multicourse lunches of fresh local seafood and game are featured there. The food is well worth the price, but don't be shocked if you see items on the menu that would have Greenpeace tearing its hair out. (Open for lunch at 11 a.m. daily, 1 p.m. Sunday; Bryggen 11, 5003 Bergen; +47 55 30 20 70)

The Wharf Area: Bryggen, or old wharf district, gives Bergen's harbor its characteristic medieval look. Painted in shades of white, barn red and mustard, the tall, narrow, wooden warehouse buildings, rebuilt many times after disastrous fires, evoke the style and color of the original buildings. Now they house shops and eateries. In the midst of Bryggen is Bryggens Museum, which houses the ruins of the original 12th-century building foundations. They were discovered during excavations in 1955 following the most recent fire, along with other artifacts. (Open daily May to August, 10 a.m. to 5 p.m.; September to April, Monday to Friday, 11 a.m. to 3 p.m., Saturday, noon to 3 p.m. and Sunday, noon to 4 p.m.; Dreggsallmenningen 3, 5835 Bergen)

The Bergen Fish Market: At the very end of the harbor, five minutes from Bryggen, it's a great place to stroll and watch the locals haggling over the day's catch, but it's also a nice spot to enjoy a quayside lunch of freshly caught salmon, fish and chips or a whale burger. Next to the fish market is a flea market offering loads of souvenirs. Be warned, though, that many of the trinkets aren't as authentic as those you might find in other areas of the city. (Try the shops in the old Bryggen buildings.)

Bergen Aquarium (Akavariet i Bergen): There's a for-fee ferry that crosses from the Fish Market to the aquarium two to three times an hour during the summer season. Found at the opening of the harbor, the aquarium features birds and sea life, especially animals found in and around the North Sea. Seal and penguin pools are popular features, as well. (Open daily, 10 a.m. to 4 p.m.; closed Mondays between October and April; Nordnesbakken 4, 5005 Bergen; +47 40 10 24 20)

The Bergen Art Museum (Bergen Kunstmuseum): Like our Smithsonian Institution, this is actually a group of individual, separate museums, all of which can be found on the shores of Bergen's central lake, Lille Lungegadsvann. Four museums make up the facility: The City Art Collection (Bergen Billedgalleri Permanenten) houses Norwegian and international art and religious icons from the 13th century forward (Nordahl Bruns Gate 9); the Rasmus Meyer Collection (Rasmus Meyers Samlinger) displays works of Norwegian artists from the 18th through the beginning of the 20th centuries, including a collection of the works of Edvard Munch (Rasmus Meyers Alle 9, 5015 Bergen; +47 55 56 80 00); the Stenersen Collection (Stenersens Samlinger) features 20th-century masterpieces by Munch, Miro, Picasso, Klee and others (Rasmus Meyers Alle 3); and KODE Contemporary (Rasmus Meyers Alle 9, 5015 Bergen; +47 55 56 80 00), found between the Rasmus Meyer Collection and the Stenerson Collection, features various contemporary art exhibitions and sells graphic art and paintings. (Open daily, 11 a.m. to 4 p.m.; closed Mondays May to September)

Floibanen Funicular: If the line between the lake and Fish Market were the base of an isosceles triangle, at the apex of the triangle would be the station for the Floibanen Funicular, which climbs more than 1,000 feet to the peak of Mt. Floyen. At the summit, visitors are afforded magnificent views of Bergen and the other six mountains that frame the city, as well as the fjords beyond. There are also a gift shop, restaurant and several miles of well-marked hiking trails. Note: If you plan to walk the trails, be sure to wear sturdy shoes, as they can be steep in some parts. (Open Monday to Friday, 7:30 a.m. to 11 p.m.; Saturday, 8 a.m. to 11 p.m.; and Sunday, 9 a.m. to 11 p.m.; Vetrlidsallmenningen 23A, N-5014 Bergen; +47 55 33 68 00)

Leprosy Museum: Formerly a hospital specializing in the treatment of leprosy, this museum showcases the grim living conditions that lepers were forced to endure. It will take visitors less than an hour to explore the hospital's living quarters and to check out exhibits that show the slow and painful degradation of extremities affected by the disease. Tours are self-guided, and reading materials are provided in both English and Norwegian. (Open daily, May to August, 11 a.m. to 3 p.m.; King Oscars Gate 59, 5017 Bergen; +47 55 30 80 30)

Fantoft Stave Church: Long after the rest of Europe switched from wood to stone for church construction, Norway continued to build wooden "stave" churches, a unique design built entirely without the use of a single nail or screw, with soaring, vaulted ceilings shaped like the upside-down hulls of Viking ships. Of the thousand stave churches originally built, only 28 remain. Bergen's example, originally constructed elsewhere in 1150, was taken apart and moved from its original location to Bergen in 1883. It burned during an arson fire in 1992, and the current replica was built to the original plans in 1997. The best way to get there is by public bus. First, walk to the bus station next to the train station, which is one block north of the lake on Stromgaten. Take any bus leaving from Platform 20. Buses leave every 15 or 20 minutes. Disembark at the Fantoft bus stop, about ten minutes from the bus station. Cross the road, turn right and walk up the hill behind the parking lot to the church. (Open daily, May to September, 10:30 a.m. to 2 p.m. and 2:30 p.m. to 6 p.m.; Fantoftvegen 38, 5072 Bergen; +47 55 28 07 10)

Troldhaugen & Edvard Grieg Museum and Live Performances: Meaning "Troll's Hill," Troldhaugen was the residence of Norway's most renowned classical composer, Edvard Grieg. Features of the residence, left pretty much as it was during Grieg's life, include his piano, furniture, artwork, papers and personal effects. The little cliffside shack where Grieg composed and the hillside graves of Grieg and his wife, Nina, are also open for tourist exploration. One delight is the modern chamber music concert hall, added in 1995. Periodic concerts take place in the 200-seat hall. (Check the Troldhaugen website, www.troldhaugen.com, for current schedule.) Many cruise-sponsored shore excursions coincide with these performances, and the concert hall is often in use for rehearsals, which are open for the public to drop in and listen. (Open daily, January to April, 10 a.m. to 4 p.m.; daily May to September, 9 a.m. to 6 p.m.; daily October to December, 10 a.m. to 4 p.m.; closed from mid-December to early January; Troldhaugvegen 65, 5232 Paradis-Bergen; +47 55 92 29 92)

Fjords: Bergen Fjord Sightseeing conducts half-day (four-hour) fjord tours aboard White Lady, departing from the Bergen Fish Market daily at 10 a.m., May through September. The tour gets you closer to the shorelines, villages and waterfalls than your large cruise ship can. (Zachariasbryggen, Torget 2, 5014 Bergen; +47 55 25 90 00)