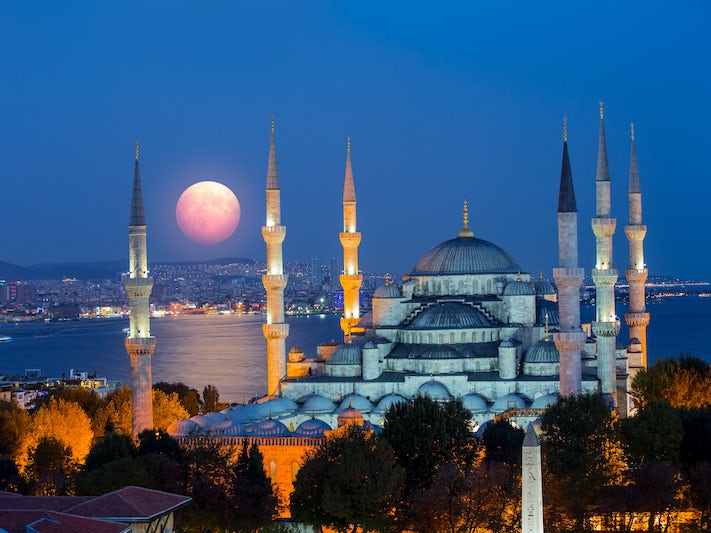 Find Things to Do in Istanbul on Viator

Popular Things to Do in Istanbul

Food and Drink in Istanbul

Turkish cuisine represents a mixture of many cultures from the diverse regions of the Ottoman Empire. Hors d'oeuvres (meze) like eggplant salad with yogurt, hummus, spiced lamb meatballs and dolmas (meat and rice rolled in grape leaves) are popular. Main courses, often served with rice or a bulgur pilaf, include grilled lamb, chicken with peppers or eggplant, and grilled fish. For dessert, try the lokum (also known as Turkish delight), a sweet gel rolled in powdered sugar and mixed with hazelnuts or pistachios. There's also tasty baklava, layers of thin pastry filled with walnuts and drizzled with syrup. Or try muhallebi (milk pudding).

Istanbul's bustling harbor, known as the Golden Horn, rings the waterfront and is a good place for snacking at outdoor markets and food stalls.

In Beyoglu, tru 360 Restaurant, located atop a building quite appropriately located at 360 Istiklal, is a way to get away from the madding crowds.

In scenic Ortakoy, the House Cafe is a local chain restaurant right on the water that not only features a vast international menu but also specializes in contemporary and traditional Turkish dishes. (It also has a hotel in Nisanstasi.) (Salhane Sokak No: 1; open Sunday to Thursday from 8 a.m. to 1 a.m. and Friday and Saturday, 8 a.m. to 2:30 a.m.)

In Pera, a small, rooftop restaurant called X (located in a historic building operated by the Istanbul Culture & Art Foundation) has breathtaking views over the Golden Horn and a Turkish menu, which features grilled prawns with saffron and oven-roasted lamb shank, among other delicacies. (Don't miss the grilled octopus with white cheese or the raw artichoke salad. (Sadi Konuralp Caddesi Deniz Palas 5, Sishane)

Those for whom lunch (or dinner) is an event should head via taxi to the Sunset Grill and Bar, which, despite its rather pedantic name, is one of the city's top restaurants for locals. It's not just the magnificent view that draws, even though the all-glass restaurant and bar, with a DJ, sits on a hilltop overlooking the Bosporus. It's also got a great menu with both Turkish and international classics; try the sea bass wrapped in parchment with lemongrass and ginger. There's also a superb sushi bar. It's the kind of place that invites you to linger. (Kuruçesme Mh., Yol Sk No:2; open Monday to Saturday from noon to 3 p.m. and every day from 7 p.m. to midnight)

Istanbul's mosques are iconic, plentiful and beautiful, and each one is different. The best known is, of course, The Blue Mosque (or Sultan Ahmed Mosque, open daily, 24 hours), a Turkish icon. Built in the 17th century as Islam's take on the Hagia Sophia, the mosque today is still a center for religious demonstrations. The vast dome is an incredible spectacle. The Imperial Pavilion, which is part of the Blue Mosque, houses a carpet museum (Tuesday to Sunday, 9 a.m. to 4 p.m.) with exhibits dating from the 16th to the 19th centuries.

But don't limit yourself to just this one. Smaller, less tourist-track mosques, like a pair designed by Sinan (the Christopher Wrenn of Turkey), include the charming and peaceful Sehzade Mosque (Sinan's apprenticeship project) and the tile-covered Rustem Pasha.

In all cases, mosques provide head covering scarves for women to borrow. All are required to leave shoes outside, so wear socks. It's considered appropriate to tip the volunteer who is on hand to make sure all are dressed appropriately and that they act respectfully during services. A lira or two is sufficient.

Behind the Blue Mosque is The Great Palace Mosaic Museum, nestled into an alleyway of tourist shops, exhibits the flooring of the Bucoleon Palace of the Byzantine era. These mosaics were only discovered in the 1950s and are believed to date back to between 527 and 565 A.D. (Arasta Bazaar; open daily, except Tuesdays, 9:30 a.m. to 4:30 p.m.)

The Hagia Sophia is one of the world's finest examples of Byzantine architecture. Once a church, then a mosque, it was made into a museum when the secular Turkish Republic was founded. The museum consists of two major parts: the church itself and the gallery of mosaics. (open daily, except Mondays, 9:30 a.m. to 4:30 p.m.)

One of the major attractions at Topkapi Palace, originally a summer residence in the pre-Christian Byzantium era, is a display of simply over-the-top gorgeous jewels, religious artifacts, silk ceremonial robes and a manuscript collection. (open daily, except Tuesdays, 9 a.m. to 7 p.m.)

The Turkish and Islamic Art Museum, housed in a 16th-century palace, features exhibits that range from the Islamic period of the seventh century to the 1800's. Highlights include illuminated manuscripts, an extensive collection of carpets (some from famous European masters) and tiles. (Hippodrome 46; open Tuesday to Sunday, 9 a.m. to 5:30 p.m.)

James Bond film buffs should check out the Basilica Cistern, which "From Russia With Love" used as an extremely atmospheric location. Also known as the "sunken palace," the cistern was at one time a reservoir for the Byzantine Great Palace and dates back to about 500 A.D. A neat curiosity is the columns that support the cathedral-style ceiling; some were taken from pre-Christian temples. (Yerebatan Caddesi; open daily, 9 a.m. to 5 p.m.)

At Istanbul's Grand Bazaar, the actual "bazaar quarter," which dates back to the 15th century, is an amazing scene. There are more than 4,000 stores sprawling across 60 streets, selling a breathtaking array of wares, from spices and furs to leather and rugs. There are even two mosques wrapped into this vast, sprawling temple of mercantile. (Eminonu Harbour; open Monday to Saturday, 7 a.m. to 7 p.m.)

Ortakoy is a fabulous, historic neighborhood that lies on the Bosporus. Its claim to fame is the fact there are both a synagogue and a mosque -- the latter quite elaborate -- located within its boundaries. Beyond that, it's a pleasant place for wandering, poking in at various antique shops and art galleries, lunching at a bistro and sipping coffee at one of the waterfront restaurants. Sunday is an especially good day to go because there's a street market, where locals sell all kinds of merchandise.

Beyond Ortakoy is another fantastic Bosphorus neighborhood called Bebek, which is also great for shopping and waterfront cafes.

Istanbul Modern has a terrific shop that focuses mostly on high-end Turkish crafts, a cafe with a view out to the Bosporus (when docked ships don't block the view) and a fantastic display of the work of Turkey's best known contemporary artists.

Take a day cruise on the Bosporus to Prince's Islands. These islands, south of Istanbul in the Sea of Marmara, were once a haven for exiled royalty and luminaries like Leon Trotsky, who went there after being expelled from Russia. Today they're a wonderful and peaceful place to get away from the hustle and bustle of Istanbul. Attractions include horse-drawn carriage tours, churches and monasteries, and quaint old mansions. There are hotels and restaurants on the main islands. Commuter ferries depart several times daily from Kabatas. There are nine islands, though ferries only travel to four.

A resort and spa in the Turkish tradition, Termal has been famous since Roman times. It's located about 24 miles southeast of Istanbul and features a historic hamam (Turkish bath), a swimming pool, and hotels and restaurants. Take a sea bus from Kabatas to Yalova (a 20-minute ride, about five departures per day) and then a quick taxi.

Beyoglu, the once fashionable equivalent of New York's Fifth and Madison Avenues isn't the upscale shopping and dining destination it once was, but it's still the heart of the city's modern life, and it features lots of restaurants and mid-level boutiques. Its center is the pedestrian boulevard called Istiklal. Make sure to look around as you walk through it; at one time, it was a district for foreigners, from Italians to Dutch, and they all built structures in the styles of their own countries. Veer off the main drag onto the narrow side streets that feed into it to see olde-style Turkish shops and retailers, ranging from a button shop to a butcher. The bustling Taksim Square, with a small park and a number of monuments, lies at the center of the Beyoglu neighborhood.

On the edge of Beyoglu, facing the Golden Horn, is the Pera neighborhood, once fashionable and now experiencing a fresh renaissance with restaurants, antique shops and galleries.

For those who want more upscale shops and cafes, head just north of Taksim Square to the neighborhood of Nisanstasi, which feels very European with its international imports (ranging from Louis Vuitton to Marks and Spencer), high-end Turkish boutiques and numerous sidewalk cafes.