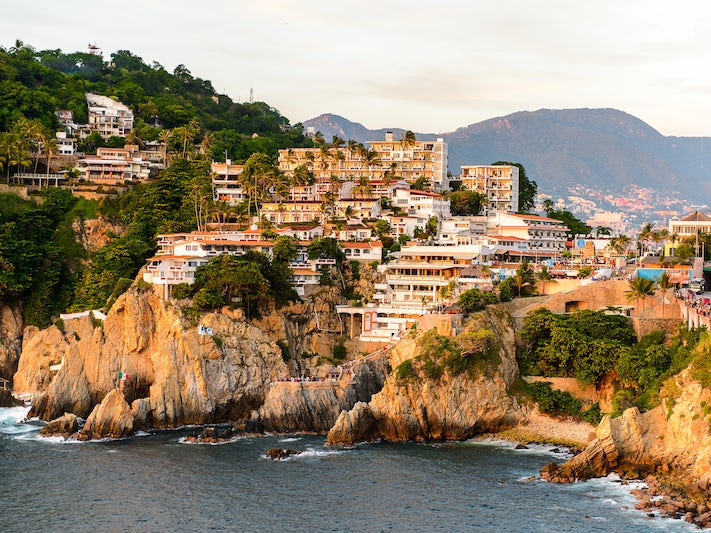 Find Things to Do in Acapulco on Viator

Popular Things to Do in Acapulco

Food and Drink in Acapulco

One thing Acapulco is big on is chains, especially American outposts, which include Burger King, McDonald's, KFC and Starbucks.

On the plaza in Old Acapulco, La Flor de Acapulco has been offering basic fare since 1939. A local's favorite, the second-story, open-air restaurant is a terrific spot to people-watch while sampling the catch of the day or other popular items like tacos or enchiladas. Lunch costs about $10. No credit cards are accepted -- cash only.

Spend any time on Costera Miguel Aleman, and you can't help but notice 100% Natural, a good-looking eatery that features light, healthy foods. It's popular with residents and tourists alike, and there's a beach location on the strip, just east of the cruise ship pier. Credit cards are accepted.

As for the Diamante, many of the hotels have fine restaurants.

Acapulco is divided into three districts with very different personalities: Old Acapulco, the Costera and Acapulco Diamante. Each one deserves a good look. Old Acapulco has a wonderful zocalo, or plaza, which is the neighborhood's heartbeat. There, you'll find boys kicking a ball around; uniformed school girls sashaying through the square with studied moves; and old men reading the paper. On the far end of the zocalo is Nuestra Senora de la Soledad, a Moorish-style church, known for its blue and gold domes. Nearby are cafes, restaurants and shops. Old Acapulco has a nice, easy-going rhythm, while The Costera, a five-mile bayside strip, zings with energy. The boulevard is home to hotels, shops, restaurants and beaches dotted with thatched-roof bars and boats owned by fishermen who troll the waters for mackerel, snapper and sea bass. The Diamante is Acapulco's high-high-end enclave. Oprah Winfrey, Robert Redford and Sylvester Stallone, among other celebs, have hillside homes overlooking the bay. The city's grander, more expensive resorts are located in Diamante; they include Las Brisas, the Fairmont Acapulco Princess and Fairmont Pierre Marques. The beaches there, on the Pacific outside the bay, are stunning. In particular, Playa Revolcadero -- a gorgeous stretch of white sand in front of the Fairmont hotels, where watching the pounding surf amounts to high drama -- is breathtaking.

No visit to Acapulco would be complete without watching the La Quebrada divers' swan dives off of a 135-foot cliff into the surf. It's quite a spectacle. The divers, typically six in all, first pray at a small shine -- and then they preen. It's like performance art. They stretch, they shake and then strike a pose -- their muscled arms outstretched -- waiting for the wind and the waves to deliver the perfect second to launch. Local fishermen started the practice in the 1930's, and today, it's their family members who continue the tradition. The best viewing platform is the verandah of the restaurant at Hotel El Mirador, once a Hollywood hangout. Don't be surprised if the divers ask for a tip after the show.

The resort towns on Mexico's Pacific coast developed more because of water sports and sportfishing then for its culture. But, history buffs should make time to explore the Museo Historico de Acapulco at Fuerte de San Diego. The fort, built to protect the city's wealthy commercial harbor from pirate attacks, was constructed in the form of a perfect pentagon. The museum has 11 rooms that trace Acapulco's lineage, from its earliest Indian inhabitants to the nation's independence from Spain in 1821. Of special interest are the displays detailing Acapulco's importance as a hub in the trade route between New Spain and the Philippines. Signs are in Spanish and English. The museum is open Monday to Saturday, from 9 a.m. to 6 p.m. Tickets cost $3.50.