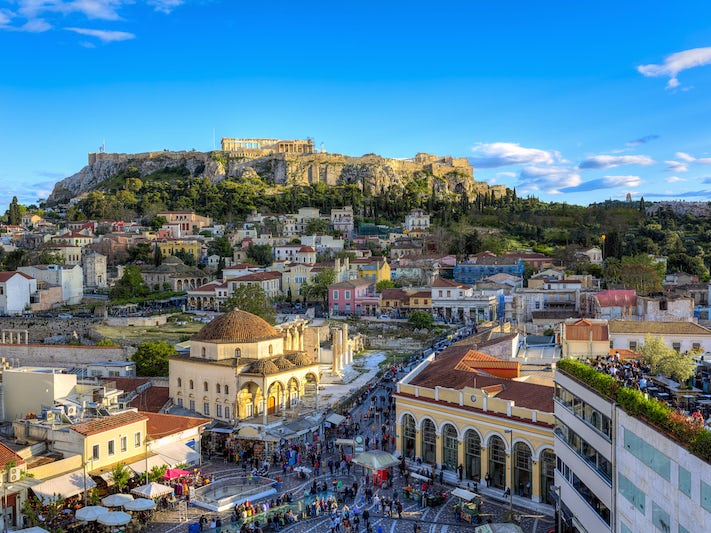 Find Things to Do in Athens on Viator

Popular Things to Do in Athens

Food and Drink in Athens

Like most great cities, Athens features a wide range of downtown restaurants suited to a variety of tastes and budgets, although you can always find Greek favorites and seafood.

Fisherman's Taverna: The lively Plaka district, though a bit touristy, is home to charming eateries, included the highly recommended Fisherman's Taverna. A favorite with locals as well as visitors, this restaurant apparently counts Brigitte Bardot among its many fans and offers a fine taste of old-style Greek hospitality, a cozy open fire and alfresco dining in a pretty courtyard. It serves fish dishes alongside Greek classics, and offers live music every evening day except Tuesday. It's advisable to book ahead. (Erechtheous 16 and Erotokritou 12, Plaka; daily 11 a.m. to midnight)

Melilotos: Less traditional in appearance but equally renowned for its food is Melilotos, which has a central location (only five minutes' walk from Syntagma Square) and serves up fresh and colorful salads alongside Greek favorites like barbecue pork and phyllo-wrapped cheese and leek pastries. (Kalamiotou 19, Syntagma; opens at noon on weekdays, 2 p.m. on Sundays)

Couleur Locale: For a handcrafted cocktail paired with tasty comfort foods (pizza, burgers, etc.) and fabulous views of the Parthenon, head to Couleur Locale. This rooftop bar and restaurant is literally a hidden gem -- accessible by entering a quirky antique shop in a semi-abandoned building and taking the elevator to the third floor. The space itself boasts a stylish industrial design, a plethora of tables and a bar lined with fresh ingredients like herbs and dried citrus wheels. It also has a glass awning with retractable shades to shield the sun without obstructing the views. (Normanou 3, Monastiraki; open 10 a.m. to 2 a.m. daily)

Acropolis: Take a stroll along the multicolored marble pathway, which leads to the Acropolis, the ancient "hill city" and the capital's historic heart. The Acropolis is the must-see Athens attraction. Get there early (or if your ship's schedule allows, go late) if you want to explore this fabulous site without excessive heat and crowds. You should stock up on snacks and drinks at the entrance to the site, as they are not available inside (though you can buy books and postcards). We also recommend wearing comfortable closed-toe shoes with good traction, as the marble steps tend to be slippery.

Parthenon: The Acropolis' most iconic structure is the Parthenon, a 24-centuries-old temple famous for the six "maiden" pillars that support its frontage. It's accessible via the same marble pathway as the rest of the Acropolis. Note: The Parthenon continues to undergo extensive reconstruction, so you're bound to see workers on-site.

Central Market: Stroll around the market to get a real flavor of Greek food and drink. Be warned though, some of the food stalls -- featuring slaughtered whole lambs and skinned rabbits -- are not for the squeamish. You'll also find decent flea market stalls near the food market if the sight of all that meat gets too much. (Athinas 42, Monday through Saturday 7 a.m. to 6 p.m.)

The neighborhoods of Central Athens: These include Plaka, one of the city's oldest districts, which lies near the Acropolis and is famed for its lively cafes and well-stocked antique shops. Use Plateia Syntagma (Constitution Square), which has a Metro station, as your guidepost. Plaka lies south of this square, while Kolonaki -- an upmarket district with classy boutiques, galleries and restaurants -- is at its northeast corner. Monastiraki and Thissio (charming historic districts with fine 19th century neoclassical buildings and a good array of shops and restaurants) lie to the west of Syntagma. A handful of bars and eateries in these neighborhoods also have rooftop seating areas that offer unbeatable views of the Acropolis.

If you head north from Monastiraki, you'll find yourself in Psiri, a former industrial zone that has been transformed into a haven for the trendy and avant-garde, with lots of alternative restaurants and offbeat shops. Artsy types will also love Bohemian Metaxourgeio (northwest of Psiri), which is home to Athens' Municipal Gallery on Avdi Square. Corinth, about 55 miles from Athens, is worth a visit to explore the narrow streets of its old city, view its fine Temple of Apollo and Roman Agora, and sail along the high-sided Corinth Canal. Most ships offer tours there.

Delphi: This site on the slopes of Mount Parnassus is one of the most famous of the ancient world -- and certainly the most mystical. Don't miss the Springs of Castalia -- where supplicants to the Oracle purified themselves before entering the sanctuary. Make sure you walk "The Sacred Way," which leads to the Temple of Apollo, the ancient Treasury and the 5,000-seat Theatre of Delphi. The latter dates from the fourth century BC. and offers magnificent views and amazing acoustics (have a holler to try them out).

Aegina: Athens isn't known for beaches, but if the sand and sun are calling, we recommend taking a roughly 35-minute ferry from Piraeus to Aegina, the second largest island in the Saronic Gulf. You'll find excellent beaches at Souvala and Marathon as well as the classic Greek monastery of Saint Nektarios and several ancient temples dedicated to Athena, Zeus and Apollo. Don't forget to buy some delicious pistachios to nibble on the way back.