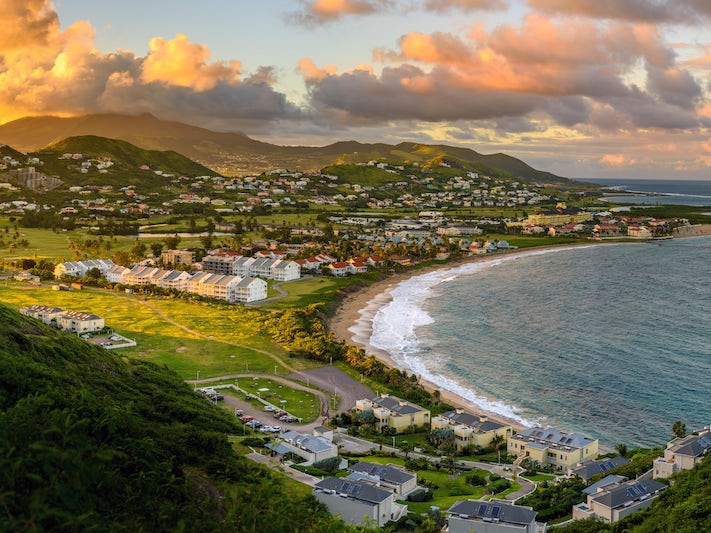 Find Things to Do in St. Kitts (Port Zante) on Viator

Popular Things to Do in St. Kitts (Port Zante)

St. Kitts has a wide variety of restaurants, ranging from restored plantation houses to casual beach hideouts. Here are some of the most memorable tables.

El Fredo's: Another locals' favorite in Basseterre, El Fredo's dishes up conch, red snapper and shrimp along with plantains, cornmeal fritters and other island sides. (Newtown Bay Road; 869-466-8871; open Monday to Thursday and Saturday 11 a.m. to 4 p.m., and Friday 11 a.m. to 5 p.m.)

Spice Mill Restaurant: Enjoy a view of Nevis at the Spice Mill Restaurant on Cockleshell Beach, which serves up grilled mahi mahi, pizza and thick burgers alongside with Caribbean libations like pina coladas and Carib beer. The restaurant has a separate beach bar, as well as lounge chairs and daybeds. Although typically closed on Thursdays, the restaurant will often open for lunch on Thursdays when cruise ships are in port. (869-765-6706; open noon to 9:30 p.m.)

Royal Palm Restaurant: Specializing in contemporary Caribbean cuisine and situated on a hillside in the ruins of a former plantation's sugar factory, Royal Palm Restaurant at Ottley's Plantation Inn serves some of the island's best food. (Ottley's Village; 869-465-7234; open Monday to Saturday for lunch from noon to 3:30 p.m., dinner daily from 6 p.m. to 8:30 p.m., and Sunday brunch 11 a.m. to 2 p.m.)

Cane Spirit Ritchmont is made from cane juice instead of molasses. The best way to sample is by trying "Ting with a Sting," a drink that combines CSR with Ting, a grapefruit-flavored soda. Try it at Mr. X's Shiggidy Shack on the South Frigate Bay strip, but be warned: It can be potent.

Best for a Half-Day Visit: There are half a dozen white-sand beaches along the island's narrow southeastern peninsula. One of the best areas is the two-mile stretch between Cockleshell Bay and Banana Bay, where you can swim, snorkel or down Carib beers and rum punch at Lion's Beach Bar.

Best for Active Types: South Frigate Bay is popular for swimming, windsurfing and water-skiing. Further south, Turtle Bay is another popular beach for windsurfing. With a sunken tugboat attracting schools of fish, White House Bay is great for snorkeling.

Bloody Point: Bloody Point is the haunting site where French and British troops massacred more than 2,500 Caribs in 1626. The view of Mount Liamuiga is spectacular.

Brimstone Hill Fortress: Brimstone Hill Fortress, a UNESCO World Heritage Site, is a 38-acre complex of bastions and barracks built by the British via slave labor and one of the best examples of a 17th- and 18th-century military fortification in the Caribbean. On a clear day, the view includes six islands: Nevis, Montserrat, Saba, St. Barth's, St. Eustatius and St. Maarten. Kids love to cross the dry moat, admire the six-foot thick walls, explore the parade grounds and walk trails in search of the island's green vervet monkeys.

Beach Bars: Relax at one of the island's clusters of beach bars, either on "The Strip" on South Frigate Bay or on Cockleshell Bay and Banana Bay beaches on the island's southeastern peninsula.

Carib Petroglyphs: North of Basseterre near the entrance to Wingfield Manor Estate are Carib petroglyphs. Etched on huge, black rocks, they offer a glimpse into the lives of the people who originally discovered the island.

Black Rocks: At Black Rocks, along the northeast shore, the surf has sculpted huge lava deposits into unusual shapes. It's a great spot for taking photographs.

Greg's Safaris: Explore the rainforest on a guided hike. Greg's Safaris combines a Land Rover drive along St. Kitts' west coast with a two-hour trek through a rainforest mountain valley. (869-465-4121)

Nevis: Take a ferry to less-traveled Nevis, rimmed by coral reefs and miles of white-sand beach. Six vessels operate the route, which takes about 45 minutes. One-way fares cost about $10 for adults and $5 for children under 12. (Schedules change by ferry but service generally runs daily from 8 a.m. to 6 p.m.)