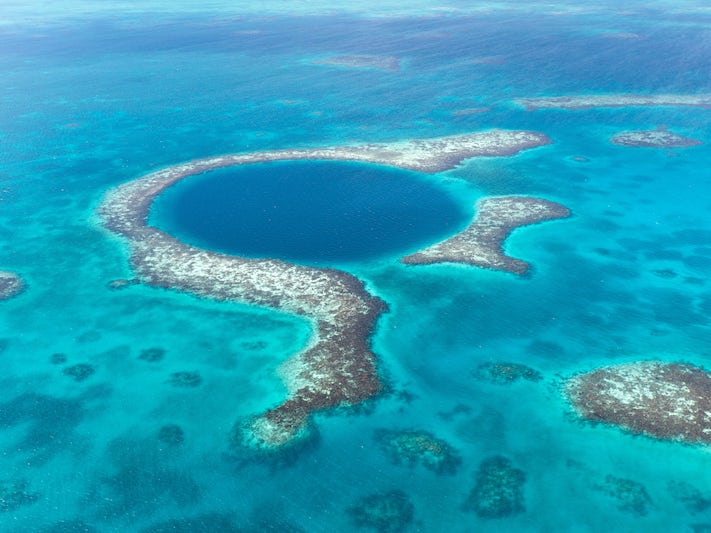 Popular Things to Do in Belize City

Belize is the second-smallest country in Central America, and though its cruise and tourism industry is growing, the country is still largely unspoiled. The locals are friendly and warm, the beaches are beautiful, the culture is rich and the exchange rate is excellent. Cruisers who love diving and snorkeling will marvel at the sea life on a shore excursion to the Great Blue Hole, a huge marine sinkhole off the coast where stingrays, sharks and loads of other animals swim right alongside you. Landlubbers should most certainly take an excursion to one or more of the many important Mayan sites on the mainland -- Belize has the highest concentration of Mayan sites in all of Central America and they are a sight to be seen.

Belize is hot, and on the mainland the humidity can be oppressive. Nearer to the shore, and on the cayes off the coast, the air is more comfortable. Dry season runs from November to April, and that is typically the best time to visit. Currency is the Belize dollar, though U.S. dollars are accepted nearly everywhere. The official language in Belize is English, and everyone speaks it, but you'll also hear Spanish and Creole from the locals.

Find Things to Do in Belize City on Viator

Food and Drink in Belize City

Wet Lizard: The spot to grab a bit to eat and a few cold beers, the Wet Lizard is a happening spot inside Tourism Village. Downstairs you'll find a DJ and a $5-a-spin wheel where you can buy rum body shots, an upside down margarita or bucket of beer. (Open as long as ships are running tenders)

Spoonaz: A small coffee and sandwich shop on the main road, just a five-minute walk after exiting Tourism Village, Spoonaz is as popular for its air conditioning as it is for the lovely sandwiches, meat pies, salads, parfaits and pastries it serves up. (89 North Front Street; open Monday to Thursday, 6:30 a.m. to 6:30 p.m., Friday and Saturday, 6:30 a.m. to 8 p.m. and Sunday 6:30 a.m. to 3:30 p.m.)

Cafe Michel'le: A popular local spot, you'll find tasty burritos, paninis, wraps, salads and smoothies here. It's cash only, so a great place to spend any Belizean dollars you might have gotten as change from a souvenir shop or tour operator. (Corner of Eyre & Hudson Streets; open Monday to Friday, 7 a.m. to 6 p.m. and Saturday, 7 a.m. to 1 p.m.)

Check out Belize's own Belikin beer available at any of the bars within the Tourism Village, as well as at most restaurants in town. Frozen daiquiris and rum punch are also quite popular.

Belize City is not the best port for beaching it up, but you will find a couple of options if you absolutely must spend some time on the sand or in the water. Both options require a boat ride to get to.

Closest to Your Ship: For the ultimate in R&R at the beach, head to Caye Caulker, a 45-minute ferry ride from the Marine Terminal. Just 5 miles long and 1 mile wide, laid-back Caye Caulker is great for snorkeling as Belize's famous barrier reef is just 10 minutes away.

Best for Sunbathing: A bit farther away is Ambergris Caye, the largest of Belize's islands. Some of Belize's prettiest beaches can be found here, but you'll also find some of the best snorkeling and diving spots, including Shark Ray Alley.

Diving and Snorkeling: Underwater sightseeing is number one on the hit parade of favorite outdoor activities due to the astounding sites along the barrier reef. Some of the best dive sites lie just off Ambergris Caye. Cruise ships and charter operators offer day trips that include transportation. If you'd rather make your way to Ambergris Caye on your own, head for the main town of San Pedro, where many of the dive operators are clustered. For a list of local dive shops Google "Diving on Ambergris Caye." A favorite snorkeling area is known as Shark Ray Alley (one hour by speedboat from San Pedro) where it's possible to get "up close and personal" (petting is permitted) with nurse sharks and sting rays. Hol Chan Marine Reserve is another 3-square-mile dive site. Birders can also find much to see at Ambergris Caye; one highlight is a guided boat trip to the Little Guana Caye Bird Sanctuary.

Altun Ha: Among the best of Belize's Mayan cultural sites is Altun Ha, a heavily excavated site that is a convenient day trip out of the city. Once a major trading and ceremonial center, it consists of several impressive temples and tombs highlighted by the Temple of the Masonry Altars. You can get there with a ship excursion, private tour operator or by hiring a taxi. (Open daily from 8 a.m. to 5 p.m.)

Xunantunich: Another important Mayan site, Xunantunich is located near the Guatemalan border, and can only be reached by crossing the Mopan River on a hand-cranked ferry. Situated here are six major plazas ringed by more than 25 temples and palaces; the largest of the remaining temples is Il Castillo, which is worth climbing for the spectacular panoramic view from the top. Because Xunantunich is not easy to get to, your best bet for visiting is with a tour operator. (501-608-1788)

The Belize Zoo: Wildlife lovers who would rather not venture far from the city can check out the Belize Zoo. Set on 29 acres, visitors will find more than 170 animals, representing 45+ species, all native to Belize. Highlights include jaguars, ocelots, coatis, howler monkeys and kinkanjous. (Western Highway mile marker 29; 501-220-8004; open daily 8:30 a.m. to 5 p.m.)

Crooked Tree Wildlife Sanctuary: This sanctuary, a little further out from the center of Belize City, is a bird lover's paradise. With more than 16,000 acres of lagoons, creeks, forests and pine savannas, visitors can spot dozens of bird species, as well as howler monkeys, crocodiles and more. (Western Highway mile marker 30.8; Open daily, 8 a.m. to 4 p.m.)

Community Baboon Sanctuary: While not the easiest of attractions to get to (you'll need to hire a taxi or rent a car), if you love monkeys, this really is the place to visit. Part of a larger "community" of villages, you'll find the Baboon Sanctuary visitor center in Bermudian Landing. The village is home to a substantial number of black howler monkeys, called "baboon" in the local Creole dialect. You'll also find an abundance of other animals including parrots, hummingbirds, turtles and more. Guided nature walks are available for a small fee. (Across the street from the soccer field in Bermudian Landing; 501-245-2009; open most days from 8 a.m. to 5 p.m.; email ahead of your visit to arrange a tour - cbsbelize@gmail.com)

Jaguar Paw: One of the best spots to explore Belize's caves. In ancient times, the Mayans believed that caves were the "underworld" and were revered as sacred places. Options for exploring the network of caves include tubing or by kayak or canoe. Look for cave float tours from your cruise line or private operators, including Viator and Chukka.