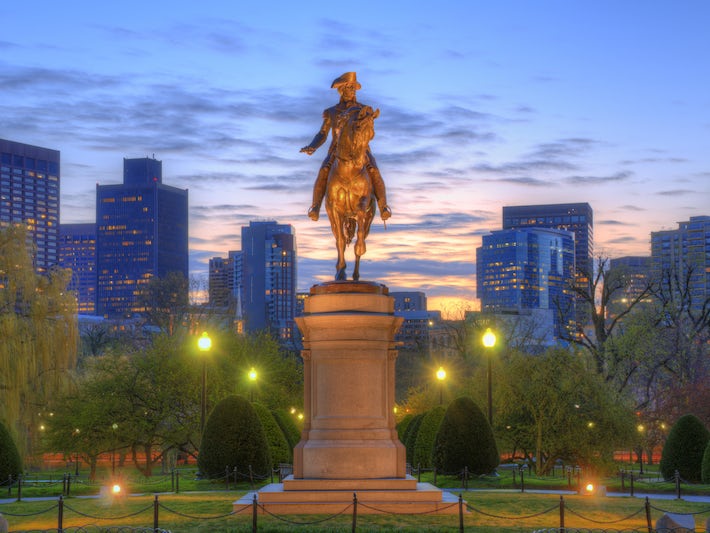 Popular Things to Do in Boston

Boston is not just about baseball, Harvard and organized crime, despite what the movies would have you believe. The Massachusetts capital is truly an historic center -- an excursion to walk the famed Freedom Trail is a must for first-timers who might also consider a tour of some of the sights that played major roles in the American Revolution. Spend some time in Boston Common for a green reprieve in the middle of the city, stop for a beer at the famous Cheers bar in Beacon Hill or visit Quincy Market for a lobster roll and a bit of people-watching. Don't forget to check out any one of the city's many museums as well as the shops on Newbury Street if you have some time to kill before your ship sets sail.

Boston is intensely cold during the winter months, making summer the most popular time to visit this New England city; fall is also a good time to visit when leaf-peeping cruises are offered. As an American city, the official language is English and currency is the U.S. dollar.

Find Things to Do in Boston on Viator

Food and Drink in Boston

Boston is an international city, and you'll notice the influence of all those cultures in eateries found throughout its many neighborhoods. Go for noodles in Chinatown or lasagna in Boston's Little Italy, known as the North End. Sandwiched in between is what could be called American cuisine, ranging from creative takes on comfort food to the classic establishment where a former president slurped his oysters.

Another benefit to noshing in a city filled with food options is that you can choose whether you want to indulge in seafood at a fine-dining restaurant, or munch on casual bites at a local seafood shack. Did we mention the seafood? Act like a true Bostonian and be sure to order a bowl of New England clam chowder before you ship out. A small army of seafood venues is located in the Seaport area of Boston, not far from where you are docked.

With just a few hours in port, an excellent option for getting a taste of everything in one conveniently located place is definitely Quincy Market, located in the middle of Faneuil Hall. While it is crowded on a quiet day, this long, historic market is a microcosm of Boston eats and treats, showcasing a sensory overload of the area's top food and drink vendors.

Faneuil Hall: There are tons of food choices here. The food court offers a little bit of everything from sushi to stuffed grape leaves to pizza. There is not a lot of seating, though. For a sit-down meal, Durgin-Park (340 Faneuil Hall Marketplace) has been a popular spot since 1827. Nearby, at the historic Union Oyster House (41 Union Street), you can request to sit in the booth where JFK dined (good for bragging rights with the folks back home).

Back Bay: Legal Sea Foods (various locations including Legal Harborside at 270 Northern Avenue, 617-477-2900) serves the freshest seafood around, including lobsters and "chowda."

Seaport: The Seaport is undergoing a major transformation as many more businesses and hotels are built and move in. Among the bustle are plenty of amazing restaurants to satisfy any taste. Try Sportello (348 Congress Street; 617-737-1234) for Italian fare in an upscale diner setting or Rosa Mexicano (155 Seaport Boulevard; 617-476-6122) for a contemporary take on Mexican cuisine.

Across Boston: If you're considering a coffee, stop in to a Dunkin' Donuts. You might be thinking, "What's so special about that?" But if you've noticed one on every corner, it's because the chain started right here in Boston, and it's fiercely popular.

Walk the Freedom Trail: The 2.5-mile trail links 16 historic sites. Start at the Boston Common information center (146 Tremont Street), where you can get maps and information. Audio tours are available, as are guided walking tours. Several operators also offer trolley tours. You really have to be into history to do the whole thing (it takes a day, at least). But don't miss a personal favorite, the gravesite of the woman known as Mother Goose. It's at the Granary Burying Ground on Tremont Street. The Boston National Historical Park Visitor Center (15 State Street) has friendly park rangers available to answer questions, and a book and souvenir shop.

Art: The Institute of Contemporary Art (25 harbor Shore Drive) is a vibrant museum, near the Boston Harbor, showcasing the inspiration and imagination of contemporary artists. Boston's Children's Museum (308 Congress Street) is the second-oldest children's museum in the world and emphasizes hands-on exhibits. The Museum of Fine Arts (465 Huntington Avenue) is one of the top art museums in the country, noted especially for its Impressionist collection. Monet lovers will rejoice! For a quirky collection, visit the Isabella Stewart Gardner Museum (25 Evans Way). While the works are no longer located in the eclectic collector's former home, a 19th-century building designed to look like a 15th-century Venetian palace, the variety of art collected in the museum's new home on Evans Way is impressive.

Back to the Country -- In the City: Boston Common, this city's version of New York's Central Park, is absolutely lovely. It's a must do, especially on sunny days. (Tremont Street; open daily, 7 a.m. to 9 p.m.) Don't miss the adjacent Boston Public Garden, especially the lagoon where you'll find the city's famed Swan Boats, operated by paddles. The ride takes about 15 minutes, but beware: On nice days lines can be long. If you're a fan of the famous "Make Way for Ducklings" children's book (which also makes a great souvenir), check out the statues of Mrs. Mallard amid her ducklings. (4 Charles Street; open daily, 7 a.m. to 9 p.m.)

Cambridge: If you've already explored Boston, head across the Charles River to Cambridge. Visit Harvard University -- which, in addition to hallowed halls, has several excellent museums -- and hang with the college kids in Harvard Square (home of the Coop, Harvard's famous bookstore, and other shops like the original Urban Outfitters). Cambridge is also home to MIT; walking tours are offered on both campuses. While in town, you might also want to stop by the Longfellow House, former home of prominent poet Henry Wadsworth Longfellow. The house was also General George Washington's headquarters during the Siege of Boston from 1775 to 1776.

Sailing the Charles: The Charles River used to be a big city embarrassment, but now it's clean enough to support living things and a great place to catch city views. Rent a 13- to 23-foot boat from Community Boating (21 David Mugar Way). Kayaks and Windsurfers are also available. If you're lucky, you'll pass by the Harvard and MIT rowing teams out practicing.

Chinatown: Boston's Chinatown is the fourth largest in the U.S. and has an impressive gate and a good array of Asian restaurants and inexpensive gift shops. For dim sum, check out Empire Garden, located in the unusual venue of a former theater (690 Washington Street, second floor).

Go Italian: The North End is often referred to as Boston's "Little Italy." It's still an ethnic Italian neighborhood, despite higher rents and an influx of yuppies. You'll find old-fashioned storefronts nestled among more than 100 restaurants. Grab a cannoli (the best in town) at Modern Pastry on Hanover Street, or check out Regina Pizzeria (established in 1926). Be on the lookout for strolling musicians, too.

Boston Red Sox: A pilgrimage to Fenway Park, the historic stadium that opened in 1912, is a must for baseball fans. If you're lucky enough to be in town on a game day, it's a true Boston experience. The park also offers hourlong walking tours of the iconic stadium when the Red Sox aren't playing. (Fenway Park, 4 Yawkey Way; 877-733-7699)

Back Bay: In Back Bay, you can view the historic row of Victorian brownstones, a shining example of 19th-century architecture. The Boston Public Library (700 Boylston Street) -- or Central Library, as it's also known -- offers free hourlong tours that highlight the architecture of Charles Follen McKim and Philip Johnson, as well as many works by famed sculptors and painters. If shopping is more your speed, check out the fashionable Newbury and Boylston street areas for high-end retail therapy.

Beacon Hill: Known for its small village atmosphere, Beacon Hill is home to examples of Federal, Greek, Revival and Victorian architecture. You'll find brick sidewalks, decorative ironwork and burning gas lamps within this historic 1-square-mile area in the heart of Boston. The New State House, which was built in John Hancock's pasture, can also be found there. Free tours of the facility are offered. This is where you'll also find the famous Bull & Finch Pub (84 Beacon Street), which was the inspiration for the television show "Cheers."