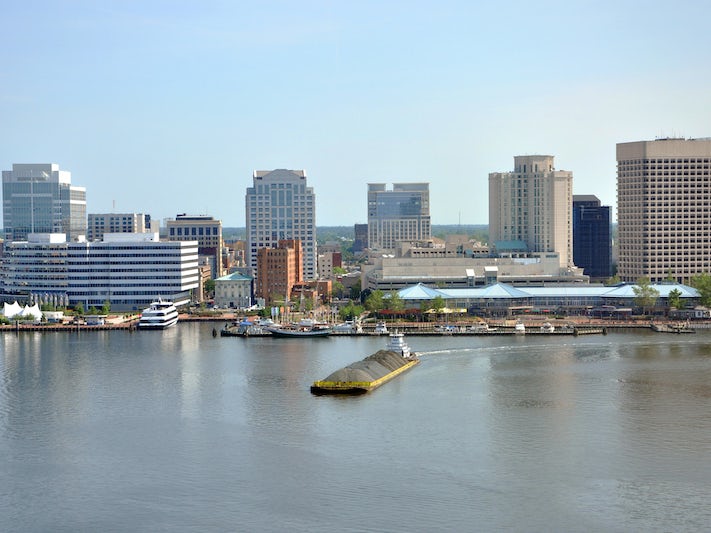 Find Things to Do in Norfolk on Viator

Popular Things to Do in Norfolk

Food and Drink in Norfolk

Norfolk is located on the Chesapeake Bay, so seafood is the thing to eat here. Coastal Virginia specialties include She Crab Soup (a cream-based soup with sherry and large chunks of crab meat) and Virginia oysters (either on the half shell or baked as in Oysters Rockefeller). Seasonal local fish include rockfish, red snapper, flounder and softshell crabs.

The quintessential summer drink of nearby Virginia Beach is the orange crush (a mix of orange juice, triplesec, vodka and sprite), and you'll find it on some Norfolk cocktail lists, as well.

Because Norfolk's naval facilities bring in people from all over, you'll find restaurants touting cuisines from all over, too. Local food has a southern twist, but is not traditionally Southern cooking. Many of the upscale restaurants are chef-owned.

Granby Street, just steps from the cruise pier and running through downtown, is restaurant row, and you'll find every imaginable food style and plenty of bars here. If you want to venture farther along the water, the historic Freemason District offers restaurants in historic buildings. You can also bike along the water to the Chelsea section of Ghent to hit up local breweries.

Waterside District: Across Town Point Park from the cruise ship pier is the Waterside District, a dining and nightlife area set right on the river. Whatever you're hungry for, you'll likely find at one of the 10-plus eateries, including the Blue Moon Taphouse, Guy Fieri's Smokehouse, Luk Fu pan-Asian restaurant and Cogan's Pizza. (333 Waterside Drive; 757-426-7433)

219 Bistro: Granby Street is chockablock with restaurants, but if you're overwhelmed by choice, stop into 219 Bistro for lunch, dinner or weekend brunch. Enjoy a mix of options from land and sea, including crab cake, duck breast and avocado toast. Open Monday through Saturday, 11 a.m. until close; Sunday, 10 a.m. until close; weekend brunch served until 3 p.m. (219 Granby Street; 757-416-6219)

Luna Maya: Another Ghent go-to, this sisters-owned restaurant has long been a favorite for Mexican and Latin food. Fill up on authentic tacos, burritos, quesadillas and enchiladas in an allergy-friendly environment. The venue is peanut free; offers vegetarian, vegan and gluten-free menu items; and will accommodate other food restrictions as best they can. Best for folks staying in Norfolk pre- or post-cruise as it's dinner only. Open Tuesday to Saturday, 4:30 p.m. to 10 p.m. (2010 Colley Avenue; 757-622-6986)

Doumar's: One fabulous not-to-be-missed experience is at this retro drive-in, opened in 1904 and still offering curbside service and carhops. The ice cream is served in handmade waffle cones, and the burgers and barbecue are also tasty. Stop in on your way to the zoo. Open Monday through Thursday, 8 a.m. to 11 p.m.; Friday and Saturday until after midnight. (1919 Monticello Avenue; 757-627-4163)

Sun-lovers should head to nearby Virginia Beach (a 20-minute drive) where there's a rollicking boardwalk (you can rent bikes and roller blades) and beach scene.

Norfolk's waterfront maritime attractions: At Nauticus, the main attractions include a hands-on ocean-related science and technology center and battleship U.S.S. Wisconsin, one of the last battleships built by the U.S. Navy; it earned five battle stars during World War II and is docked adjacent to the center. Inside Nauticus, there's also the Hampton Roads Naval Museum, focusing on all things naval.

You can also take the 2-hour Victory Rover Naval Base Cruise from Nauticus to see the world's largest naval facility; the narrated cruise goes past aircraft carriers, nuclear subs and guided missile cruisers. Tickets are available at Nauticus or buy a combo with Nauticus admission. Open daily 10 a.m. to 5 p.m. in summer; from Labor Day to Memorial Day, open Tuesday through Saturday, 10 a.m. to 5 p.m., Sundays noon to 5 p.m. (One Waterside Drive; 757-664-1000 or 757-627-7406 for the sightseeing cruise).

Historic walking tour: Tour historic Norfolk on foot via Journey to Freedom, Hampton Roads' Cannonball Trail and the Underground Railroad. It begins at 401 East Freemason Street and winds through downtown, pointing out about 40 points of historic interest.

Chrysler Museum of Art and Glass Studio: The city's art showplace features permanent exhibitions of American and European masterpieces along with collections of decorative arts and glass. It's in the Neon arts district. Free admission. Open Tuesday through Saturday, 10 a.m. to 5 p.m.; Sunday noon to 5 p.m. (1 Memorial Place, glass studio at 745 Duke Street; 757-664-6200)

A newer hotspot, the Neon District, borders Ghent to the south and is Norfolk's first official arts district. Centered on Granby Street, the area features public art and murals, performance venues including the historic opera house and art galleries, plus plenty of places to eat.

Minor League Baseball: The AAA Norfolk Tides is the Triple-A affiliate of the Baltimore Orioles, and a member of the International League. The season runs April through Labor Day. (Harbor Park, 150 Park Avenue)

Norfolk Botanical Gardens: The 175-acre Norfolk Botanical Gardens is the largest botanical garden in Virginia. Stroll paved and unpaved paths to see the flower gardens, butterfly house and large children's garden, all set against a waterside backdrop. You can take tram or boat tours to see the gardens if you prefer not to walk. The botanical garden is located by the airport, about 25 minutes from the cruise port. Open daily 9 a.m. to 7 p.m. (6700 Azalea Garden Road; 757-441-5830)

Virginia Zoo: More than 700 animals live at Norfolk's 100-year-old zoo. Areas are themed around world regions, including Africa, Asia, Australia and North America; visitors can also tour the World of Reptiles, zoo farm and themed gardens. It's a 15-minute drive from the port. Open daily 10 a.m. to 5 p.m. (3500 Granby Street; 757-441-2374)

If you're spending time in Norfolk before your cruise, consider tacking on a few days to visit renowned area attractions.

Historic Colonial Williamsburg: About an hour away; this living history museum features a view of American life from 1699 to 1780 and encompasses more than 500 buildings, homes, trade shops and taverns. (101 Visitor Center Drive, Williamsburg; 888-965-7254)

The Yorktown Battlefield: The site of the Revolutionary War's last battle, it's a national historical park. Ranger-led tours and programs are available throughout the year. Open 9 a.m. to 5 p.m. daily. (1000 Colonial Parkway, Yorktown; 757-898-2410)

Busch Gardens: Also near the city of Williamsburg is this fabulous European-themed park with main stage productions and some 35 rides. (One Busch Gardens Blvd.; 757-229-4386)