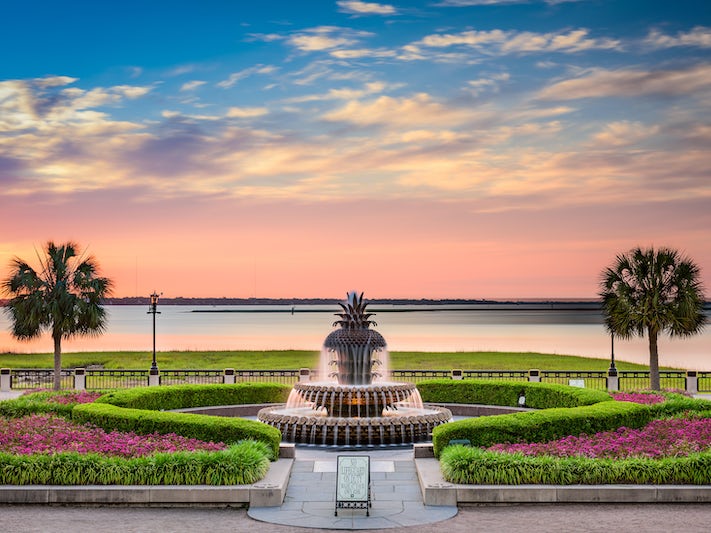 Find Things to Do in Charleston on Viator

Popular Things to Do in Charleston

Food and Drink in Charleston

Gaulart & Maliclet (98 Broad Street, 843-577-9797) is known as Fast & French by everyone. This place offers great pate, fruit and cheese plates, sandwiches and salads; at night, enjoy French country fare. It's open all day.

Hominy Grill (207 Rutledge Avenue, 843-937-0930) is best known for its breakfasts, and dinner is just as great. A short ride from downtown, it's southern comfort food with a twist. Ever had jalapeno hushpuppies with green tomato ketchup?

Magnolia's (185 East Bay Street, 843-577-7771, 11 to 3 p.m.) has become a Charleston classic, with updated Southern specialties in a clean, elegant atmosphere. The killer appetizers and desserts are not cheap.

Martha Lou's (1068 Morrison Drive, 843-577-9583, breakfast and lunch only until 2 p.m.), 10 minutes away, is a "don't judge a book by its cover" experience: Southern soul wrapped in pink cinderblock. The cabbie knows the place; he ate there and sat next to the mayor and a federal judge.

The Noisy Oyster (24 N. Market Street, 843-723-0044, open all day) is bright, colorful and fun for families and everyone else. A variety of seafood and other options is available. The walls roll up for an open-air experience. It's reasonable and within sight of the ship terminal.

TBonz Gill & Grill (80 N. Market Street, 843-577-2511) has a fun, lively atmosphere that's reminiscent of a jazz eatery you'd find in New Orleans. As its name suggests, TBonz is a great place to snag some steak, but it also features seafood, burgers, nachos and other indulgent fare. The mashed sweet potatoes come highly recommended.

Amen Street Fish & Raw Bar (205 E. Bay Street, 843-853-8600) is a posh bar and seafood restaurant with an urban feel, making it a superb addition to the eateries of Charleston. But, despite its appearance, it's quite affordable and offers amazing crab cakes. Other menu items include delicious hushpuppies, burgers and an assortment of items like salads, soups and, of course, seafood.

Cupcake (433 King St., 843-853-8181) is the perfect place to pull up a chair if you're craving a sweet snack. Amazing cupcake varieties include red velvet, lemon, chocolate, chocolate peanut butter, vanilla, carrot cake and many other tasty options.

The Historic District: This is truly the Charleston of yesteryear, covering the city in its Colonial and Antebellum eras. It can be toured in several ways. You can wander on your own with a guidebook and a map, strolling and stopping as you please. You can take one of the carriages that leave from Church and N. Market Streets for a 45-minute ride with an entertaining guide. (Try to get on a carriage with a No. 1 medallion.)

You can also sign up for a guided walking tour with one of the many companies offering them, such as the Original Charleston Walks, which has a range of general, combination and specialty tours. All general tours will include landmarks like the Old Exchange Building, Rainbow Row, the Battery, St. Michael's Church (the city's oldest, dating back to 1761) and St. Philip's Church. (Ask about Calhoun's multiple burials.) Other tours by minivans cover more ground with multiple stops and are easier on the feet.

Specialty tours abound. You'll find Gullah Tours, which portray the African-American experience (including slavery), and Amanda Dew Manning's culinary tours, which feature markets, restaurants and specialty shops, are interesting options. Lastly, if time and temperament allow, come back after dark for one of the many ghost tours, which offer a different perspective on the city's history.

Houses & Museums: Charleston features half a dozen magnificent house museums, an art museum and a historical museum, along with outlying plantations; all are open for tours. They can be visited independently, in conjunction with a tour, or you can buy a two-day Charleston Heritage Passport that covers them all ($44.95). The sites include the Nathaniel Russell House (51 Meeting Street; with a magnificent flying staircase and decor), the Edmonston-Alston House (21 East Battery; planter's waterfront town home with splendid furnishings), the Heyward-Washington House (87 Church Street; Washington stayed here in 1791. See the priceless Holmes Bookcase and the incredible gardens.), the Joseph Manigault House (350 Meeting Street; a rice-planter's residence, designed by his brother who also designed City Hall), the Aiken-Rhett House (48 Elizabeth Street; a huge mansion, preserved in its mid-19th century condition). Both the Gibbes Museum of Art (135 Meeting Street; an excellently eclectic collection) and the Charleston Museum (360 Meeting Street; 300 years of the city's life and history) are included in the Passport or can be visited individually. Not included in any package, but worth a visit, is the Calhoun Mansion (16 Meeting Street; a post-Civil War exercise in Victorian opulence and, no, it's not John C. Calhoun, but a later relative who bought it from its builder).

Fort Sumter: "Where the Civil War began," Fort Sumter sits at the entrance of Charleston Harbor, a battered reminder of the furor and folly that so characterized the Civil War. The attack on the fort was a public spectacle for Charlestonians, who were unaware of the hardship and destruction that would follow. The fort itself, under constant siege and assault, ended the war as a ruin. A visit to the interpretive center at the pier is suggested before boarding the tour boat. The tour lasts a little longer than two hours and includes a narrated harbor cruise, as well as admission to the monument itself and the services of the knowledgeable National Park Services guides.

The South Carolina Aquarium, located just next door to the Fort Sumter National Monument building, is ideal if you're traveling with children. While you're there, check out the venue's albino alligator. There's a variety of other exhibits, too, including otters, fish, sharks, turtles, jellyfish and even a bald eagle. Be sure to use the map you're given when you purchase your tickets. It can be difficult to navigate otherwise.

Special Events: At certain times of the year, some events can use up every hotel room, restaurant and parking space in town, so plan ahead. These include the Southeastern Wildlife Exposition in mid-February, the Wine and Food Festival the first weekend in March and the famed Spoleto Festival of the Arts from late May to mid-June -- but be aware of the crowds. Additionally, a series of house tours and events take place twice a year, with private residences, gardens and venues being opened up for public viewing. In October, the Preservation Society sponsors Fall Tours of Homes & Gardens, and, mid-March to mid-April, the Historic Charleston Foundation conducts the Festival of Houses & Gardens. If either coincides with your cruise-related stop in Charleston, so much the better.

Visit one of the Ashley River plantations for a glimpse into a unique way of life. Drayton Hall (843-769-2600), a National Trust property, is the finest Georgian structure in the country and was untouched by Union troops, who history suggests may have thought it was a leper hospital. Magnolia Plantation & Gardens (800-367-3517) has grown from seasonal camellias and azaleas to year-round blooms, events and specialty gardens. Middleton Place (843-556-6020), with its incredible Butterfly Lakes, has exquisite formal gardens, as well as extensive vistas over the rice fields and the river. Each has expanded its offerings for a more balanced look at slavery and the part it played in the area's history.

Golf at one of the many excellent courses in the area, including the renowned Ocean Course, which is one of five at Kiawah Island Resort (800-576-1570). After your round, stop off at the resort's ultra-luxury hotel, the Sanctuary, for a drink, a meal or just a look around.

See tea being grown at Charleston Tea Plantation (843-559-0383), the only tea-producing farm in America. Set on rural Wadmalaw Island, the facility not only grows tea (a relative of camellias), but also processes it onsite. Tours of the operations are offered daily with samples.

Ride a bike over the massive and striking Ravenel Bridge on the Cooper River. The structure has walking/biking lanes and offers incredible views of the city, the harbor and all the way out to sea. At the other end, Patriots' Point, is a naval museum built into the WWII carrier Yorktown. If you'd rather not ride, take the water taxi. Affordabike is a nice option (534 King Street, 843-789-3281).

Charleston is home to the Charleston RiverDogs, a class-A South Atlantic League affiliate of the New York Yankees. If you're spending time in Charleston pre- or post-cruise, you can catch a night game for just a few dollars. The field, located in Joseph P. Riley, Jr. Park, is at 360 Fishburne Street and is within walking distance of hotels in the Medical District; from downtown, it's a five- to 10-minute cab ride. The stadium is also where you'll find the Homewrecker Hot Dog -- a half-pound, all-beef dog (featured on an episode of "Man vs. Food") to which you can add any of 25 toppings for reasonable prices.