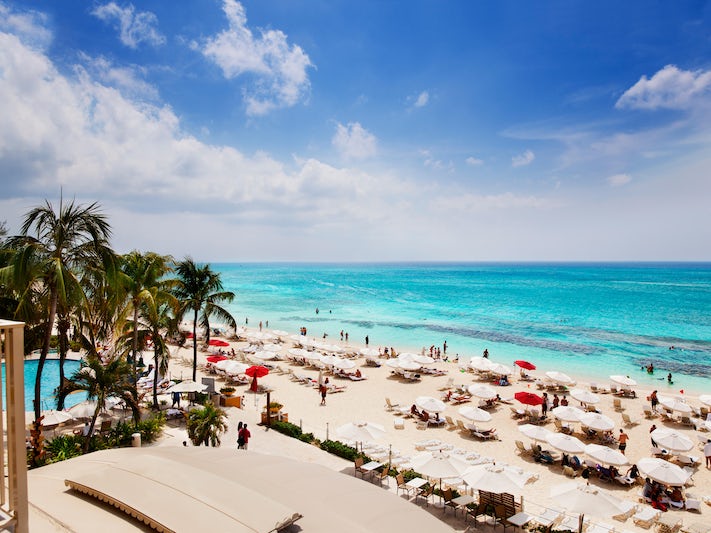 Find Things to Do in Grand Cayman (Georgetown) on Viator

Popular Things to Do in Grand Cayman (Georgetown)

Lunch spots are divvied up between downtown George Town and the various beaches. You'd expect them to be crowded, but we've found it easy to get a table if you go slightly earlier and slightly later than the peak lunchtime hours -- say, 11:30 a.m. or 1:30 p.m. Typical menus spotlight the same ingredients found on other Caribbean islands: beans and rice, steamed fish and coconut, though the Caymans are particularly known for conch-based dishes.

To cool off from the Caribbean heat try a local tipple. Cayman Islands is the original home of the mudslide and the local version eschews the ice cream for a blend of vodka, Kahlua, Baileys, cherry and cinnamon. Find it at the Wreck Bar & Grill in Rum Point.

Grand Old House: Located in an old plantation house The Grand Old House is full of atmosphere and ideal for a gourmet lunch. The building was shipped from Boston and reassembled in George Town more than a century ago. Reservations are highly recommended. (648 S. Church Street; 345-949-9333; Monday through Friday, 11:30 a.m. to 2:30 p.m.)

Cracked Conch: Featuring its namesake ingredient in an assortment of appetizers, including fritters, soup and ceviche. And, of course, you can order your conch "cracked" (pounded thin, dredged in egg, then flour, and fried); the dish is accompanied by pickled fennel and curried tartar sauce. Jerked meats (pork, chicken and burgers) are popular, too -- as are the sweeping sea views. (857 North West Point Road, West Bay; 345-945-5217; lunch served daily, 11 a.m. to 3 p.m. December through May only)

Champion House II: A favorite with the locals, this popular spot features island dishes like curried goat, braised oxtail and turtle stew. If you're there on a Saturday, don't miss the themed lunch buffet, featuring even more Caymanian and West Indian dishes. (43 Eastern Ave.; 345-949-7882; open daily, 6:30 a.m. to 10 p.m.)

Best Beach Overall: Often named one of the best beaches in the Caribbean, Seven Mile Beach offers everything from beachfront bars to rows of umbrella-shaded lounge chairs and water sports. Among the placid and clear waters, you can find fine snorkel spots right off the beach -- the artificial reef in front of the Marriott is a particularly good one. Stretching 5.5 miles (not seven), the beach is public, so you can walk the length of it.

Best Secluded Beach: Most cruise passengers head to the beaches on the western part of the island. For seclusion, head northeast of George Town to Cayman Kai, Rum Point or Smith Cove. The drive will take 30 to 40 minutes, but the exclusion is worth it. There are beachside amenities available, including restaurants, beach resorts and water sports.

Best Beach/Shopping Combo: Governors Beach is a stone's throw from Governors Square Mall, making it an ideal destination for people who want to chill out on a beach but get anxious about sparing enough time to shop, too.

Stingray City: The top attraction on the island is Stingray City, a sandbar off North Sound where a population of rays once congregated to eat the leftover bits that fishermen threw overboard and now hang out to be fed squid by tourists. Visitors have the unusual opportunity to hop in the shallow water with the habituated creatures, feel their velvety skin and pose for photos. Guides accompany you.

Scuba diving and snorkeling: Cayman Wall is a world-renowned dive site and, arguably, one of the Cayman Islands' main attractions. Snorkelers flock to Devil's Grotto, south of Eden Rock, and can check out the wreck of a 1940s schooner called the Cali just steps from the port. The shipwreck is also the most popular spot to "snuba" (a hybrid of snorkeling and scuba-diving, with air coming through long hoses connected to tanks at the surface, rather than tanks strapped to your back). Snorkeling right off the beach at some spots (near the Marriott at Seven Mile Beach, for example) is super easy and accessible. The island abounds with dive and snorkeling trip operators, such as Ocean Frontiers (800-348-6096) and Divers Down (345-945-1611).

Pedro St. James "Castle": Considered the birthplace of democracy in the Cayman Islands, in 1831, residents met here to elect the Cayman's first legislative assembly. The great house itself, circa 1780, is the island's oldest stone structure. It has lovely grounds that are ideal for strolling. Check out the panoramic view from Great Pedro Bluff. (Pedro Castle Road, Savannah; 345-947-3329; open daily from 8:30 a.m.)

A visit to Hell: The town of Hell is centered on a field of crusty, black, razor-sharp rocks that look like the surface of, well, hell. It's admittedly a tourist trap with nothing to do but buy a few souvenirs and mail a postcard that's postmarked, "Hell."