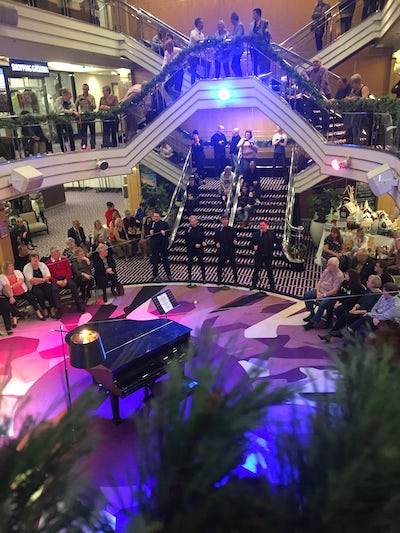 See all photos
Cruiser Rating
3.4
Average
212 reviews
Ratings by category
Featured Review
London Sydney segment Round the World 2020
"It was also fantastic to meet up with our Cruise Critic members after about 18 months of blogging and it felt like we were old friends when we came together in Taverners Bar for the first time.We had a scheduled Cruise Critic meeting where the Hotel Director explained the situation was quite fluid and how the ship was adapting to the changes...."Read More

Review for Columbus to Baltic Sea

Rosco4271
2-5 Cruises • Age 70s
It was my 70th Birthday and we saw an Add in October for a 70 day cruise to London going to taste many places I could not afford to normally travel to. Covid-19 was in the news and we had China and Honkong removed from the ports to be visited. I checked with our agent the week before and he said it would go ahead. I noted the Travel insurance would not refund us if we pulled out. 25th February we ...
Read More

PastorBod
6-10 Cruises • Age 70s
We wanted a relaxing trip home from New Zealand opposed to our regular method of flying. We intended to use the on board facilities for massages etc which were superb eventhough a little pricey compared to other cruise lines. The use of sauna, gymnasium and relaxation room was an added and unexpected bonus. The entertainment wanted and waned but the last night before diembarking in Sydney was ...
Read More

London Sydney segment Round the World 2020

Tuffydog
10+ Cruises • Age 60s
This cruise itinery ticked a number of bucket list items- route, destinations and activities such as cruising the Panama Canal and South Pacific. We caught the coach from Victoria Bus Station to Tilbury (prepaid and trouble free), where we endured a long wait for checking documentation, travel insurance, visas and medicals. After review we were quickly processed and headed to our cabin where ...
Read More

Excellent first cruise, great value for money - I am hooked!

CP2201
First Time Cruiser • Age 40s
Firstly, I am one of those people that rarely writes a review, but I enjoyed my cruise with CMV so much, I am boring the people around me! Also, I was really disappointed to read a review from the same cruise that was really quite negative, so surprised that it was the same ship and schedule, we are all different though I guess! Yes the ship is now 30 years old, some areas did show signs of ...
Read More

kedge39
10+ Cruises • Age 60s
We chose this cruise as we had been on the Christmas Market cruise for the previous 3 years and thoroughly enjoyed them. This year was different. the atmosphere on board was unlike previous cruises. I can't quite put my finger on it, but it was almost as if everyone had given up for the year. Some of the crew worked really hard and were attentive to passenger needs but some seemed burned-out. ...
Read More

souc2
2-5 Cruises • Age 20s
Chose this cruise as was a very cheap deal, obviously get what you pay for. Cabin was very outdated, hairs on bedding, hairs in the sink and floor was filthy when we arrived and wasn’t hoovered the whole time we were there. Freezing cold in room even with heating on. Loose wires on the phone. Tv didn’t work properly. Cabin steward was very rude and didn’t do his job at all. Food was basic ...
Read More

Yet another poor Cruise from CMV

SHED1
2-5 Cruises • Age 60s
We took a Cruise with CMV in March to Iceland which was Awful and the complaint went as far as ABTA but we secured a discount on another Cruise and thought we would give them the benefit of doubt and give them another chance to redeem themselves with the Christmas Cruise to Holland, Germany and Belgium. The start wasn't good as the ship had been delayed in Belgium. We sat in the pretty ...
Read More

RJHNorthyorks
10+ Cruises • Age 60s
We booked this because of the price and destination after seeing an advertisement in a newspaper. We have done many other cruises all over the world mainly with Celebrity or RCI. We purchased car parking which was cheap but very chaotically managed. My husband is extremely good at parking but struggled to get our car out of the space at the end of the cruise due to the way other cars had been ...
Read More

First time on CMV - good value for what we paid

missmagpie
10+ Cruises • Age 50s
Wanted a short break away with the girls for Christmas and the price of this beat anything we could get comparable onshore so decided to give it a go. I have been on numerous cruise lines but never rushed to CMV due to some of the bad reviews but I went with an open mind. Ship old but doesn't bother me, we use Marella and Fred so know what to expect. We paid inside cabins and got huge outside ...
Read More

lozzles1987
6-10 Cruises • Age 30s
My mum and I went on this cruise when we saw it advertised for a really good price (only £258 per person!). Having done several cruises before, we had not sailed with CMV before. We were expecting it to be pretty average, with fewer facilities and maybe not such good food etc. We were wrong! We were upgraded from a standard inside cabin, to a restricted view window cabin - it wasn't that ...
Read More