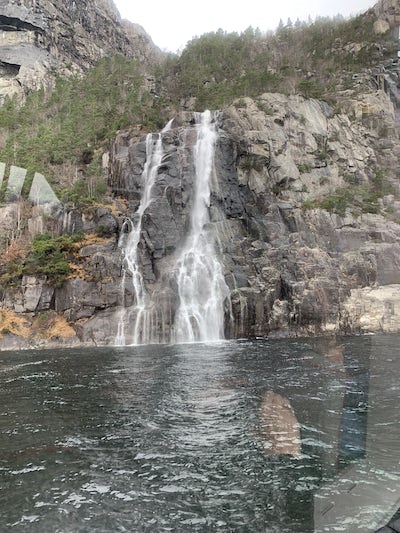 See all photos
Cruiser Rating
4.6
Very Good
1867 reviews
Ratings by category
Featured Review
A great experience with Viking Star!
"Having experienced their river cruise previously, wanted to try the ocean version with Viking. I was not disappointed by the experience. I found the company extremely professional in their approach to just about..."Read More

A great experience with Viking Star!

Having experienced their river cruise previously, wanted to try the ocean version with Viking. I was not disappointed by the experience. I found the company extremely professional in their approach to just about everything. The organisation/logistics efficiently well managed. Catering on board....great choice of restaurants/food and beverages and wonderful crew service at all times. The cabin ...
Read More

We have done several Viking cruIses before so we were expecting more, The shore excursions were less than expected - even the extra cost ones were less than expected. The buses were full and uncomfortable. One couldn't even make it up the hill out of town and all the guide was worried about was if she was going to be back in time. The walk to the buses was long and over wet and slippery ...
Read More

Excellent service and food. Although the ship was sold out, we never felt crowded. There was always a place to sit and relax or read. During the evening there was always a live entertainment in the Living Room. With the main, buffet, and specialty restaurants, we never had to wait more than a few minutes. We had meals in each restaurant and never felt rushed to leave. We especially like ...
Read More

This Viking Ocean Cruise was wonderful. Every staff member was kind, helpful and caring. Our stateroom was excellent, great bedding, shower was large with glass doors, bathroom had heated floors, a great built in night light, plenty of outlets for plug ins and USB ports. The food was excellent! We loved the Norwegian favorites served at lunch! We enjoyed the included excursions. When we ...
Read More

In search of the Northern Lights

The adventure of a cold vacation in beautiful Norway, with the chance of seeing the Northern Lights was a draw. Great time on a beautiful ship, full of cozy places to read, visit and explore.The Spa was fun and so nice to be able to use it as often as we wanted. Massage staff very good and helpful. Embarkation and disembarkation were the smoothest and least amount of hassle of any cruise ...
Read More

To see the lights and to stay at the Igloo Hotel. However, everything was wonderful and we even said it would not matter if we did not see the lights because we were having such a good time. The inclusions of wine at lunch and dinner, free wifi, free laundry facilities, included excursions, and included specialty dining experiences are all a plus so that the cruisers are not "nickel-and-dimed" to ...
Read More

First time with Viking: it will not be the last

This was our first booking with Viking Ocean Cruises, and really this was due to the fact that they were the only cruise company in Norway during February. Having sailed with many 5/6 star operators including Regent, Oceania, Cunard (QG;s) we didn't have any raised expectations of what Viking would be like so as not to be disappointed - which we have been on our last Oceania cruises In a nut ...
Read More

Proof again that Viking is Superior in Cruising the Oceans

The Northern Lights were on our bucket list so we were excited to do this cruise. The winds were too strong to make it into Bodo so we cruised onward. Viking was unaware of the Sami Festival culminating the weekend we were in Tromso. I asked the General Manager, Tom, why we could not get to Tromso, the next port, earlier so we could participate and enjoy the Sami Festival. He was not aware of the ...
Read More

We booked the cruise for a chance to see the Northern Lights, and we were fortunate enough to see them on 3 occasions on various days; although not undulating and luminous as one would hope, they were still quite good. Our cabin was comfortable and provided everything we needed. Steward service was outstanding. The debarkation went well and without problems, although the airport did not open ...
Read More