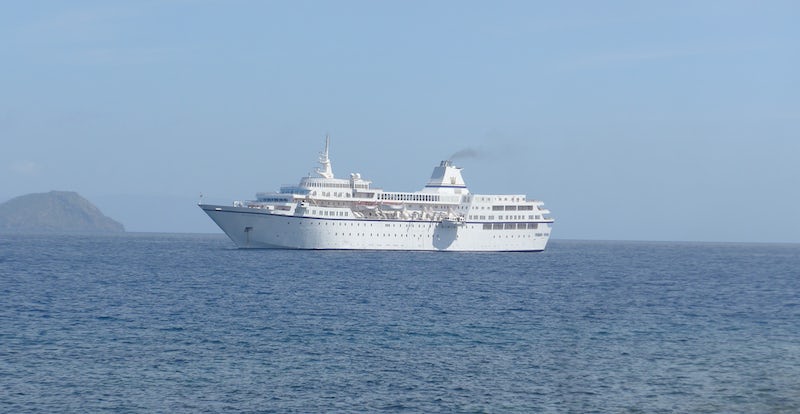 The saying is: never go back! In 2012 we had an unforgettable cruise on Aegean Odyssey and we have always wanted to return. So on 26 April 2019 we flew to Athens to join her for a Classical Greece and Islands of the Aegean cruise. All went well, transfer to the port of Piraeus was swift and we were quickly into our comfortable outside cabin. Later we attended an Excursion Briefing for the ...
Read More

Voyage of the Damned

This is our third time on the Aegean Odyssey. It will be our last time on the Aegean Odyssey. The ship suffered engine problems on the previous cruise and they were forced to issue a Full refund to all passengers. The company has confirmed that our ship suffered a similar fate and the company made a decision to put a priority on getting the ship to Athens. That meant dropping ports, ...
Read More

Captain and cruise director denied there were any problems with the engines.

Excursions. Unique and well orchestrated shore trips. However, the captain continually lied regarding the reasons for skipping ports and cruising at only 5 knots. Crete maritine authority nearly denied the ship permission to leave Chania port without a seaworthy test. Had to limp to Athens. Ship has NO activities on sea days other than a couple of lectures and bridge (which we don't play), ...
Read More

A once in a lifetime experience - (NEVER AGAIN).

What a disastrous cruise experience. It is difficult to know where to start with this review. We always try hard to give a balanced and factual review. On this occasion there is not much we can say which is positive. The Aegean Odyssey is an old ship (nearing its 50th year). Originally built as a ferry it has been refitted as a small passenger ship. To be fair it not in bad shape for a ...
Read More

Review for Aegean Odyssey to Asia

I had previous cruises on large ships and thought it would be a change to try a small ship cruise in parts of Asia I had not visited. The Aegean Odyssey cruise from Singapore to Colombo seemed to fit the bill. The 21 day cruise included 2 nights stay in a hotel at Singapore. Checking into the ship was complicated by the fact that we did not secure the Indian visa for the stopover at Port Blair but ...
Read More

Review for Aegean Odyssey to Greece

We boarded the ship in Piraeus after spending 2 nights in the King George Hotel in Athens, followed by a 2 night land tour to Delphi and Nauplia. This was a very popular cruise: we booked 6 months ahead and there were only 3 cabins left! We had an outside cabin on Columbus deck, which was compact but had everything needed for a two week cruise. There are two restaurants on board: the Marco ...
Read More

Review for Aegean Odyssey to Greece

In choosing this cruise we wanted to travel to the Greek Islands in a smaller ship, visit ancient sites and learn a little more of the history of the area. The brochures and itinerary met all our requirements as it was a combination of 3 back to back cruises. It indicated a reasonable level of fitness which also suited our requirements. On arrival in Venice we found that the cabin was as we ...
Read More

Wanted to see and explore Iceland and some of Scotland. We have sailed with this company several times in the past, but I can assure you it will not happen again. From the time we left port there were problems. The water pressure in our cabin was so bad that it was a joke. A joke we tried to have rectified for EIGHT days before the issue was resolved. We were offered a remotely located ...
Read More

Itinerary with expert speakers to give background was appealing. Dr Paul Roberts was particularly outstanding but Keats expert fascinating as was Mary Beard's husband! The Cruise Director Richard was wonderful - for his entertaining cabarets and quizzes but also being the life and soul of the ship. Some of the places - such as Dubrovnik and Pompeii were very busy but the Shore team ...
Read More

Very good cruise with some issues.

Review for Aegean Odyssey to Italy

We choose this cruise because the route from Venice to Rome covered so many areas that we wished to visit. Having been spoiled by a couple of Viking cruises this one didn't measure up in some regards. Much of the food in the buffet was not hot enough and we quickly adopted the formal dining room. The educational lectures were well done and much enjoyed, we not not so keen on the ...
Read More