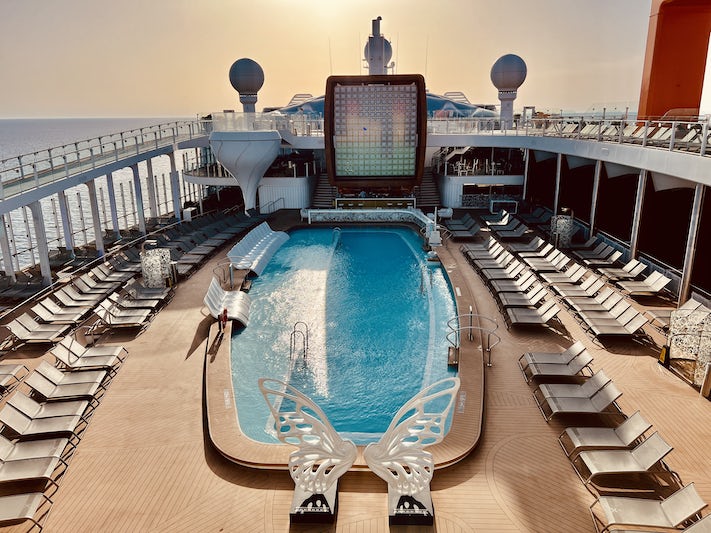 See all photos
Cruiser Rating
3.8
Average
643 reviews
Ratings by category
Featured Review
Luxury cruiser's first cruise on X, on the Edge, solo
", I could not even hear the captain for his 2-3 minute two announcements a day unless I went to the hall door -- there is no room on/off switch for the PA ( the butler said it is so pax can sleep -- apparently for a pax to have choice, by offering an on/off switch, would not be a good idea).It was also very basic, for wine naive pax, plus the chatty somm talked so much and so long at the start that the intro Veuve Cliquot champagne, already poured, went flat and was at room temperature by the time he gave a go ahead to try it ( but the remaining wines were good as were the better cheese samples , which BTW I could not get in my room -- when I ordered a cheese plate there, I got a weak Swiss, a American/Velveeta type, and an inexpensive blue, no crackers...."Read More

Gary@Lpool
10+ Cruises
After our previous cruise last year on Silhouette which we really enjoyed, we were really looking forward to the Edge class and also Retreat onboard !!! We had also just completed a back to back on Harmony in Suite Class, so our expectations were high. How dissapointed we were on this cruise, Staff shortages were obvious with queues at most bars, very little table service, no service at all in ...
Read More

lovetocruise20222022
6-10 Cruises • Age 50s
There was nothing about the cruise that I could make a negative comment about. The entire staff was amazing. Friendly, eager to assist with our needs, service in all of the restaurants .. perfection. We were so impressed with Celebrity, that we booked another cruise while on board for 2023. Embarkation, and check in were smooth and seamless. We has an Aqua class cabin, so were entitled to ...
Read More

Another excellent cruise on the EDGE

randomvoyagestuff
10+ Cruises • Age 50s
Even though this is the oldest of the EDGE class ships it is my favourite. I think it must be the staff on the EDGE make all the difference. . Not much to add to my last review of the EDGE, apart from.... If you are not happy with anything on the ship from dining to entertainment don't moan about it, or accept it, do something about it. In nearly all circumstances, the staff on the ship ...
Read More

Back to the Med on Edge

p18750
10+ Cruises
My wife and I finally got back to cruising in July and I thought I might give my impressions of Edge (our first time on an Edge class ship) and changes in cruising we noticed. First Edge was a great ship and our infinity veranda was an excellent choice. The infinite veranda allows you to be on your veranda and still in your cabin at the same time. On this cruise the weather in Europe was hot, ...
Read More

Good to be back in the sun

ferrs11
10+ Cruises • Age 70s
We stayed a couple of days in Rome beforehand and took a Rome Airport Transportation car down to the port at Civitavecchia on embarkation day. Celebrity’s organisation at the terminal was excellent, it really did exceed expectations - we had booked a retreat class suite and the check-in service could not have been better. There is a dedicated suite section and we were on the ship within 15 minutes ...
Read More

Honeybadger418
10+ Cruises • Age 60s
I chose the cruise for the itinerary— mainly, the Greek islands and Naples. The Edge was an amazing ship with so many dining options to choose from! Captain Tasos’ morning announcements and participation in the crew vs passengers pool volleyball game was entertaining. Speaking of entertaining, the music performances of Uptown were fabulous and fun with audience interaction! Another ...
Read More

MaVtMdFl
2-5 Cruises • Age 60s
This was a fantastic cruise! The ship wasn't full, so no crowds anywhere. We were greeted like royalty by the grateful and incredibly friendly staff. We never sprang for specialty dining, as the regular food was superb. The nightly entertainment was all wonderful. I loved the itinerary. Portofino was beautiful, Corsica had Napoleon history and Cannes had film history, Barcelona Wow!! La Sagrada ...
Read More

Turneringtheworld
10+ Cruises • Age 50s
What an amazing ship. First of all we were a group of six in aft rooms right under the ocenview cafe. Since there is a lot of questions on these rooms I thought I would provide my feedback. Balcony was awesome very large and the views a awesome. Some soot most days and we found the furniture had its toll and had greyed due to this. Some deck noice in the AM around 7am. We would book again but try ...
Read More

randomvoyagestuff
10+ Cruises • Age 50s
This is my 4th voyage on the Celebrity EDGE, and first since 2019. I am a real fan of the EDGE class ships, and Celebrity Cruises in general. Celebrity have created an incredibly comfortable class of ship, with a design and space that just works for the passengers. Having upped the game in almost every area, from an incredibly large pool, to a modern technically effective, yet stunning ...
Read More

Cruise was great, tested covid-positive when trying to fly home

George&amp;J
10+ Cruises • Age 70s
My wife and I had a wonderful Mediterranean cruise. The Celebrity tour for Santorini wine was great. We visited three wineries, each with its own unique approach to wine, each with knowledgeable and informative presenters. Our guide was easy going and created a relaxed atmosphere. The other Islands we visited were pleasant and the Mediterranean seems to provide us with its own vitality and ...
Read More

Find a Celebrity Edge Cruise from $427