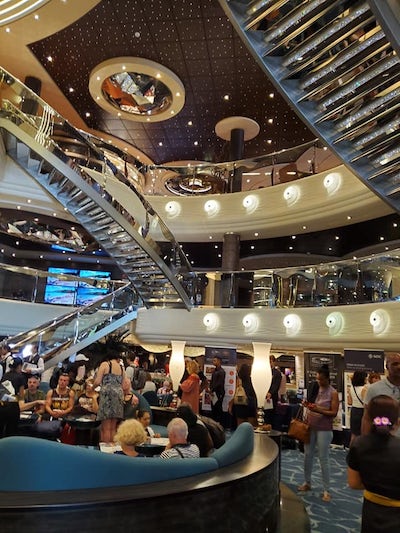 CruisesForMillenials
2-5 Cruises • Age 20s
This was my first MSC cruise - I just got off the Preziosa this morning. Here are a few thoughts about the experience, coming from an a American 20-something year-old who has been on other cruises. First, know that there is a smoking area down by the middle pool - you’ll sometimes walk through a cloud of smoke often on your way to the buffets. The food was a 2.5/5 ... honestly, the dinners ...
Read More

Puiwah
First Time Cruiser • Age 40s
I choose this cruise at start because of the promise it was a family cruise boat and had a fantastic fun kids club. I was told that the cruise line had partnered with Lego and had refurbished their kids club locations with Lego theme. I was told by msc representatives that this applied to this cruise ship. I was told the kids club was fantastic and full of fun and plenty for them to do. Kids club ...
Read More

Cinderella84
First Time Cruiser • Age 40s
I've been advised by friends to consider a cruise for a family holiday. I had a look at the several options for cruises in Mediterranean, and MSC Cruises appeared to be quite international with a bog focus on family and kids entertainement. My son literally fell in love with the lego activities :-) while my husband and I were having time for excursions in each of the stop-overs. Not only this, I ...
Read More

sallynorfolk
6-10 Cruises • Age 60s
We chose this cruise as it went to ports of call that we had not been to previously, but our primary reason was to attend the Monaco Grand Prix which was an add on package to this cruise. The cabin was clean and comfortable and very quiet. The cabin was serviced daily to a high standard. The dining room was rather noisy and although the service was good it felt rather rushed and on several ...
Read More

andyfoley7
6-10 Cruises • Age 30s
Have cruised several times before with RCL, Cunard & P&O and after seeing some negative reviews on here was sceptical, absolutely no idea what they are talking about though! Was by far the best cruise I've taken. Embarkation was probably the quickest I've experienced despite the ship being full. Ship was fantastic - basically new, great facilities, very clean. Plenty of bars & lounges ...
Read More

jmaddock
6-10 Cruises
I have done serveral cruises and this one is definately the worst which is a shame as it is a beautiful ship. General comments are: Staff appeared tired and over worked. A number of them bordered on being rude and disinterested. It really appeared like most people didn't want to be there. In saying that our room attendant and main dining room waiter were very attentive and helpful but ...
Read More

minty1110
First Time Cruiser • Age 50s
We arrived on this ship in Naples on the 29th July...checking in was quite fast and we were on the ship in about 45 minutes time it was very hot no drinks offered. We were met by a member of crew who told us our room was on a floor one deck higher than we had booked we knew straight way and just made our way down the stairs to out room. No problems with room cleaned twice a day clean towels ...
Read More

Find a MSC Preziosa Cruise from $219