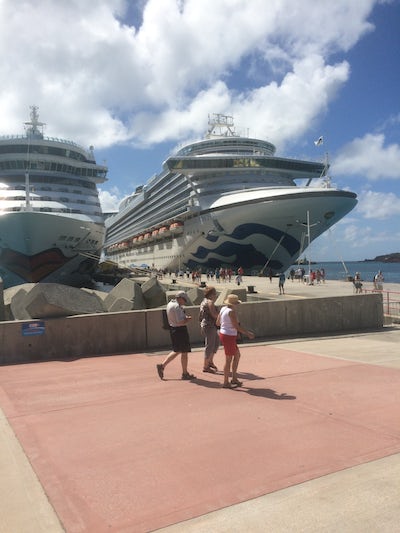 brendanodavid
2-5 Cruises • Age 40s
Took this Cruise with a group of friends. We had a blast! Evening though the weather wasn't the best we still had a great time on the boat and off the boat. Our favorite stop was in San Francisco where we took a City and Muir Woods tour with a fun tour company called Dylan's Tours. They took us all over the city and also showed us the redwood forest which I I've never seen before. We also took ...
Read More

Nursing79
10+ Cruises • Age 70s
We have an Princess Alaskan cruise planned for 2017 & decided this would be a good way to try out Princess for the first time. We have travelled different cruise lines & had never done this itinerary. The first problem was when we were notified about the noro virus on the ship the week before. Then we were asked if we would like to sail another week because finding out on the ship was overbooked. ...
Read More

tommoschetti
10+ Cruises • Age 80s
The Island Princess is for us a large ship. While we are much happier and comfortable on a ship with no more than 1500 passengers, Island princess did have adequate space for quiet lounging or reading. The crowded areas were the dining areas and bars, especially at Happy Hours We have sailed the Panama Canal twice before so there were no surprises as to the canal passing or the ports. Our ...
Read More

To South America the Easy Way

bcnvcanada
10+ Cruises • Age 80s
We chose this cruise as it would only mean a one flight to return home. The embarking of the ship was very poor. San Pedro did not have its act together. The ship itself was okay, though we were greeted with Christmas music. Gladly this ended until the cruise was nearly over. The décor of the ship seems to be a bit dated , though our cabin was comfortable. Dinning was good, we did have ...
Read More

Review for Caribbean Princess to Hawaii

stbartslady
2-5 Cruises • Age 70s
The Star Princess was find but nothing spectacular. The embarkation and disembarkation went smoothly. The cabin was ok but not enough seating area. Had to lay in bed to watch TV. Shower was very small. The food was okay but the offerings in the international cafe were pretty much the same during the 2 weeks. There were way too many art auctions and sales on jewelry/clothing. There weren't ...
Read More

Cruising the Panama Canal with Princess

georgemajors
10+ Cruises • Age 70s
I purchased air travel with Princess and had transfers to the pier on the day of the departure. Everything was very smooth. The only thing I didn't like was the amount of time we had to wait at the airport prior to going to the terminal. Add that on to the time we spent waiting once we got to the terminal and it totaled well over 8 hours of waiting. But once we got on the ship everything was very ...
Read More

houselover
6-10 Cruises • Age 80s
My husband always wanted to go to the South Seas, but I was reluctant to be on such a long trip. However, I enjoyed it all very much, even the 14 days at sea. The embarkation and disembarkation were the smoothest of the eight cruises we've taken. Princess really takes care of you, and the crew were all friendly and at ease. We took Princess excursions on each island except Honolulu and ...
Read More

cnidey
10+ Cruises • Age 80s
I have to walk with a walker, The people that helped me with the wheelchair took very good care of me . The only thing that went wrong is getting on the ship. I got out of the bus and the wheelchair and was taken inside, I picked up my papers and my cruise card and was wheeled to the waiting area. I had a priority boarding pass. the man from Princess looked at it did did not tell the ...
Read More

Stay away from Princess.

rosary
10+ Cruises • Age 70s
public bathrooms were messy, expect to get your own coffee, tea, water in buffet, long lines for anytime dining on certain nights, very disorganized and very little to do. Our table talked about how bad it was, and then someone said they are owned by Carnival, enough said. BTW even the casino was bad, the tournaments were a joke. The black jack tournament was $20.00 to enter and you had to have ...
Read More

Back From My First 3 Day Cruise

Review for Caribbean Princess to U.S.A.

Woobstr112G
10+ Cruises • Age 60s
DW and I just got off the Golden Princess after a short three-day getaway cruise. This was our 15th cruise overall and eighth in a row on Princess. The main reason we went on this cruise was to celebrate DW’s sister’s hubby’s recent retirement. Embarkation was relatively smooth. We arrived around 1430 hours and were on the ship in about 20 minutes after walking into the terminal. We did have ...
Read More

Find a Caribbean Princess Cruise from $353