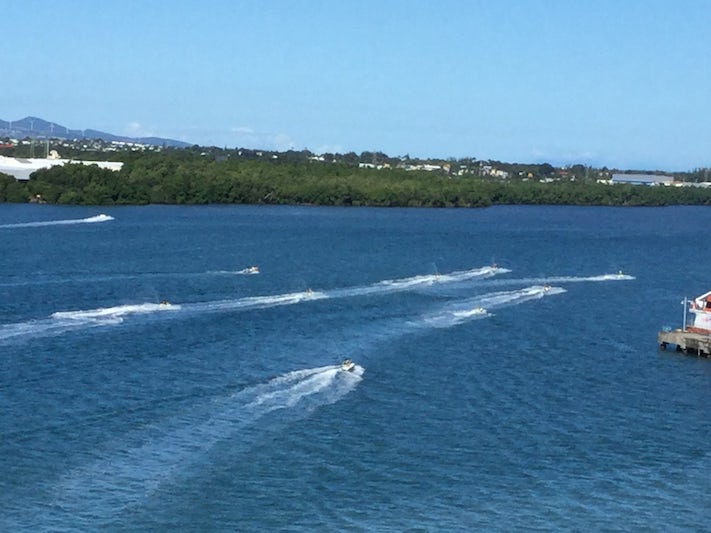 Wen and Chris
6-10 Cruises • Age 60s
Whilst we agree with a lot of the comments made about the Ventura. Some of the guests hygiene leaves a lot to be desired. Ignoring hand sanatisers on many occasions. In the buffet restaurant we saw on many occasions passengers blowing their nose & coughing into the blue serviettes & putting them back on the table. Men walking into the buffet area with no tops on. Filling water bottles from the ...
Read More

Pyer
10+ Cruises • Age 70s
Having used the Ventura last year for a 35 day cruise we were looking forward to a repeat cruise which this time included some South American ports of call.We booked a outside cabin but were disappointed to be given a cabin on deck five which was so small that the bed filled most of the space and there was nowhere to sit except the bed.The noise from the thrusters made sleeping difficult and after ...
Read More

AdeAfloat
10+ Cruises • Age 70s
We chose this cruise having enjoyed a similar cruise in 2015.Same ship, same time of the year but very different. 6 of us travelled together to celebrate a significant birthday and, as a group, we could enjoy each other's company and the facilities of the ship which made this a better experience than it would have been had we been on our own. The weather was pretty rough all the way to the ...
Read More

clintaughjl
10+ Cruises
Having just completed our first P&O cruise (aboard the Ventura )I thought I’d post my comparison with the Celebrity Solstice class ships, as most of the cruises we have done were aboard Celebrity, the last one being on the Silhouette this time last year. The ships are roughly the same size in tonnage , but Ventura carries more passengers, and I believe has a higher ratio of crew to passenger. ...
Read More

Gary1962
6-10 Cruises • Age 50s
I'll get my moan out of the way first ! We booked the cruise last January, specifically for the overnight stop in the centre of Amsterdam, to allow us to easily come and go from the ship, and venture back into the city for the "night life". A month after our booking, we were told that for "operational reasons" we would now be stopping at Ijmuiden overnight Instead, and being coached in an hour ...
Read More

NNNeil
2-5 Cruises • Age 70s
Our August/September Golden Anniversary Cruise was on P & O’s Ventura, a ship on which we have travelled before, in fact it was on our first cruise just 2 years ago. We chose the itinerary primarily because the date of our anniversary was mid-cruise and the week-long itinerary included the island where we had our honeymoon back in September 1969, Guernsey, where we could relive all the fond ...
Read More

What Has Happened To P&O?

MK_Cruiser1955
6-10 Cruises • Age 60s
Some background detail first of all. P&O has been our cruise company of choice but I have been trying other cruise lines to review for my travel blog. This cruise was a long awaited return, after just over a year away from P&O Embarkation was relatively smooth apart from the appallingly managaged car parking which resulted in a half hour wait to drop off the car. Although strictly ...
Read More

Good but could improve

Matt2801
First Time Cruiser • Age 40s
As first family crew chose p and o. Buffet food was average and bland especially at dinner time.Very difficult to find a table at buy times. Staff in buffet restaurant not particularly friendly. Believe other worked. Restaurants included in price Cinnamon and Saffron. Had lovely food and very good service. We paid for food one night in the glasshouse (tapas) that was amazing. Beach house ...
Read More

Disappointing in almost every way

AnnaAnnaAnna
10+ Cruises • Age 20s
This was a family cruise around the Fjiords with frequent cruisers. The boarding was very efficient and our cabin (Superior Deluxe Balcony) could not be faulted when we first arrived. However, the food across the board was below average. It was below average in general, not just in comparison to the normal standard of cruise food. The buffet was small, cramped and disorganised with limited ...
Read More

intermittentsailor
2-5 Cruises • Age 40s
We'd only been on one cruise before, and that was with Royal Caribbean on their Vision Of The Seas ship, which is about 80% of the size of this one, I think. This was a cheap cruise, so we decided to (despite the not fantastic reviews) plump for it and see how it went. We didn't have elevated expectations and unfortunately we were right to have had that attitude! I was absolutely blown away ...
Read More