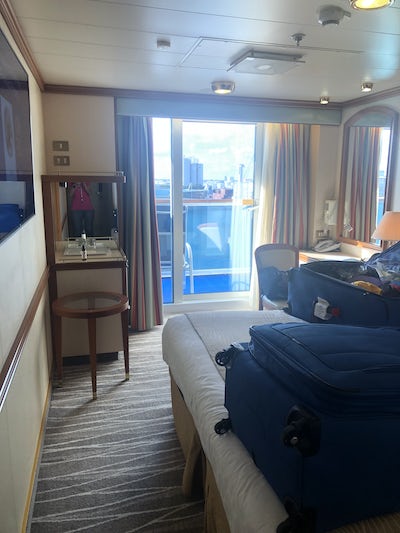 JennyN
10+ Cruises • Age 70s
We cruised from Houston to the western Caribbean for 7 nights, then back into Houston. We visited the NASA Space Centre in Houston, while the crew turned the Emerald Princess around for our Transatlantic Cruise. Never done a transatlantic cruise before. The cost of this repositioning cruise was very competitive, as we got to cruise the Med. as well after we sailed to Madeira. Emerald Princess ...
Read More

cruiseinn
10+ Cruises • Age 70s
We cruise a couple times a year with my sister and hubby, so this was our 7th cruise together and 13 total for myself and hubby. My niece and son-in-law surprised us at the Port of Houston by showing up to go with us. It was a delightful surprise making our cruise that much better to have a younger couple wanting to tag along for the fun. Four of us did the T/A crossing last fall on the Emerald ...
Read More

Wizman440
10+ Cruises • Age 60s
After booking a mini-suite sailing out of Houston, I almost cancelled it after reading reviews on Cruise Critic. Many of the complaints were about the cold, inattentive staff. This could not be further from the truth! Everyone on board smiled and said "hello", the waiters and stewards were happy and fun. There was this ONE GUY, working at the hamburger stand who did not seem to enjoy his job. ...
Read More

vanwinkp
2-5 Cruises • Age 60s
After having cruised on Princess' newest ship-the Regal in January I was disappointed in the Emerald Princess. I know it is older but that shouldn't affect the hospitality aspect of our vacation. Most of the employees were cold and indifferent throughout the entire 7 days. They hardly ever smiled and for the most part lacked in customer service. Yes, there were a few who were great but for the ...
Read More

Overall I was impressed

NationalDC8
2-5 Cruises • Age 60s
I had not been on a cruise in years, and the thought of sailing out of Houston, away from the masses in Florida was very appealing to me. But I guess embarkation day, no matter where you depart from, is always going to be somewhat chaotic, and this was no exception. I do give Princess credit for being organized about it all. That day was stressful because of the hoards of people everywhere. ...
Read More

mikey4208
2-5 Cruises • Age 60s
I have to tell you, I'm ready to fly home at the next port. I will be more than happy to follow up with a more positive review at the end of the cruise, but day one leaves a lasting impression. On the positive side..the only positive side...check in was a breeze and the people were very friendly. It went downhill from there. I paid double for my own private room and asked to be put in the ...
Read More

cruisings4us
10+ Cruises • Age 60s
Arrived at the LaQuinta Inn Webster-Clearlake. Nice pre-cruise stop for the night. Good value for the money. Drive the next day to the ship at Bayport Cruise Terminal was easy. The terminal area was well thought out and easy to navigate(drop-off luggage, parking) and the fee of $75 a lot better than Ft. Lauderdale. As an opinion, the whole terminal complex is easier and nicer than Ft. Lauderdale.. ...
Read More

Princes is not the Equal to Royal Caribbean

lovergerg
10+ Cruises • Age 80s
OMG, over 700 kids and over 500 from South America. But that is just a holiday cruise. The real issue is that they bill themselves as a equal to Royal Caribbean and they are not. She is a nice ship, they are for the most part good staff, but all the little niceties are missing. Along with the cruise director? Was there one on board? The food was good 4 out of 7 nights, the steak house is ...
Read More

oldfred
2-5 Cruises • Age 80s
booked one suite and two balcony staterooms. Family cruise for 6. rooms were nice, clean and well maintained. disappointed in the buffet, unimaginative food without a lot of selection. The only redeeming feature was the Omelet cooked for breakfast. Formal nights were a joke. they will simply NOT enforce the dress code. I saw shorts and flip-flops on SUPPOSED formal nights. the food in ...
Read More

Tump02
6-10 Cruises • Age 60s
Having cruised 6 different cruise lines including a European river cruise, my wife and I tried not to have high expectations for the Emerald Princess sailing out of the Houston Bay Port Cruise Terminal. We were pleasantly surprised at how it turned out. Parking at the terminal was a breeze. There was no covered parking but we were able to rent a canvas car cover for our vehicle ahead of time ...
Read More

Find an Emerald Princess Cruise from $623