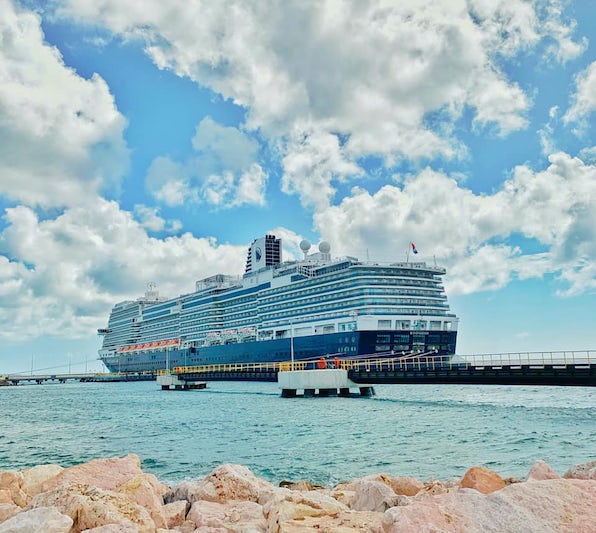 Review for Koningsdam to South America

daughter and son in law gave us the cruise as a gift food was excellent weather was great southern caribbean was fun as we had not been there in a while the ship was immaculately clean music was good and the tours were well timed, no waiting saw the mount Gay rum factory and tasted all the rums spoke a little French on a couple of the islands went to Mass on one on Sunday ...
Read More

We had our MiddLe Eastern cruise cancelled and thought that by sailing around our own New Zealand and Australia we would be fine. It was great, we managed to book another cruise for the return to Australia but sadly they cancelled that in the week we had as a stopover in Auckland. Understand the situation completely. The Noordam is perfect for size for us, love the crew, well presented ship with ...
Read More

Food: I was impressed by the main dining rooms, the meals were consistently well prepared with equally good meat, fish, and vegetarian options. Sometimes crisp items, like spring rolls, were soggy, but generally things were very tasty given the mass production. The Lido Deck offerings were bland and repetitive, but not terrible. Desserts were basic but usually tasty, and not as ...
Read More

Hawaii March 1-18 on the Eurodam

We are HA fans after multiple cruises but as others said their reputation is not what it once was. We had never done a cruise with so many sea days in a row so was uncertain if that was for us. While we survived there was not a lot to do on sea days except eat and for some to complain; the trip back to San Diego was more stressful than the trip from SD to Hawaii. Much had changed in just a week as ...
Read More

We were on the Eurodam from San Diego - 3/1 - 18/20 to Hawaii. This was during the Grand Princess from Hawaii to San Francisco, that docked finally in Oakland. We were all concerned about corona virus positive crew or passenger(s) being on board our ship. The Captain gave us daily updates, changes in hand sanitizer use, cleaning, food being served only in buffet, etc. and lack corona cases. ...
Read More

Location of travel. Not a good experience with room staff that took an item from the room, Onboard shops pushy, harassing and unethical. Food was average and allowed many people on excursions and onboard move around the ship that were sick in lite of the Corona Virus issue. Almost on a daily basis, I was standing in a food line while someone was sneezing, on a bus or tender coughing and sneezing, ...
Read More

Worst cruise out of 16

We like long cruises. It was depressing wh the number of wheelchairs and walkers. Men coming to dinner in faded jeans and baseball caps. They are very very stingy with food in the dining room. Vegetables were usually mushy spinach. One day I had one half of a Brussel sprout. The next day I asked if I could have extra sprouts, I received 2 halfs! My husband received a pile of mashed ...
Read More

We chose this cruise because we had heard good things about Holland America and it was going to places we wanted to visit. We have been on many cruises before always using Cunard, Celebrity and Royal Caribbean in the past without criticism. However, from the moment we boarded we were disappointed. The ship looked very tired. Our stateroom had a balcony and we had paid a lot of money for it. ...
Read More

Terrible experience - Money taken from my account on return from cruise

What was meant to be a holiday of a lifetime was spoilt by choosing Holland America as our cruise line. We were on a 15 night cruise starting from Sydney on February 26th. Although this ship was refurb the only changes to the cabins was the television on the wall. The bathrooms are very tired and our friends whose cabin was next door had the enamel peeling off the bath. On return from our ...
Read More

Review for Zuiderdam to Caribbean - Southern

First cruise on Holland America but 20th cruise overall. Wanted to see the Panama Canal and we selected Zuiderdam. I have avoided HAL for years and confirmed that this is not the cruise line for me. Embarkation went very smoothly in Ft. Lauderdale. Ship is older and smaller than what we have sailed on recently but it is in very good condition. The ship has three sets of elevators where ...
Read More