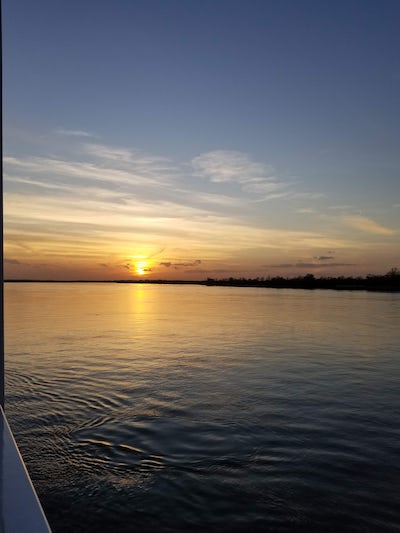 The overall cost is not worth the product

Pre-cruise: We arrived in Memphis a day before the boat was to depart and stayed at the Riverboat Company hotel, the downtown Sheraton. In spite of having read a few negative reviews, we were well pleased with the hospitality shown us by the staff from our first greeting by the bellmen, front desk staff, early check in provided, service in the restaurant for dinner (on our own), and the comfort ...
Read More

My husband and I took this cruise in December and we were pleasantly surprised. The food in the dining room was good but not always as hot as I would prefer. The same is true in the Front Porch buffet. The servers and staff are very friendly and attentive and our housekeeper was always there for us. The entertainment is good, but the piano player was a little off key at times. The hop on hop off ...
Read More

Over the recent Christmas holiday, we had the privilege of cruising on the Grand American Queen Steamboat. We cannot say enough about how much we enjoyed the experience. The staff and crew went out of their way to provide an absolutely wonderful experience. There was some minor improvements necessary in some areas, but what holiday would be complete if everything was perfect. Ship – They ...
Read More

The BEST way to see the Columbia River!!!

In November I traveled with a small group of 10 on the American Empress steamboat-style Cruise. The group absolutely LOVED the trip and the ship! The food was incredible- truly top notch! We even had lobster tail! The meals were always artfully prepared and served by the kindest, warmest staff I’ve encountered on a cruise ship. Every meal was an event. During our scenic rides cruising the ...
Read More

First River Cruise . . . and not our last

We had been wanting to try a river cruise, especially after watching the size of ocean-going cruise ships balloon until some can carry more than 6,000 passengers. The American Empress beautifully accommodates just over 221, with an attentive crew of 88. Our Category C cabin--212--was cozy, but well laid out so that we had plenty of closet space and storage, even in the bathroom. Yes, the shower is ...
Read More

Great until we both got a stomach bug on the boat

We booked both a pre-cruise stay in Memphis and a post-cruise stay in New Orleans. They were great. We made use of the trolley passes in Memphis and visited several of the included attractions. The Sheraton hotel in Memphis was very nice. We appreciated that we could check in for the cruise at the hotel. Great idea! The cruise started out great. Soon we started to hear that guests were sick ...
Read More

Our first introduction to American river travel was on the American Queen, and our journey did not disappoint. In fact, our voyage on the American Queen wasn’t just my first river cruise… it was my first cruise ever. Overall, I would rate both this boat and our experience a 5/5. When we arrived at the dock of the boat, we were a bit awe-struck. The paddlewheeler was unlike anything we had ever ...
Read More

This was our second river cruise - the first was a few years ago down the Danube in August. The American Queen is a very special ship,not only because of the beautiful furnishings, collectibles and artwork which is abundant, but because of the paddlewheel. Its power is ever present, and is mesmerizing. Visits to the engine room are encouraged. We cruised from New Orleans to Memphis. The ...
Read More

American Queen, a Grand Lady of the Ole Man River

To the Cruise Reviewers…Here’s a Breaking News story….The American Steamboat Company’s American Queen is NOT A CARIBBEAN CRUISE FUN SHIP…..That’s the rewarding thing about this wonderful Steamboat…..So don’t disparage this ‘Gem of the Mississippi ‘where you can slow down and take a leisurely cruise on America’s Premiere and Historical River. My wife and I booked the American Queen Steamboat ...
Read More