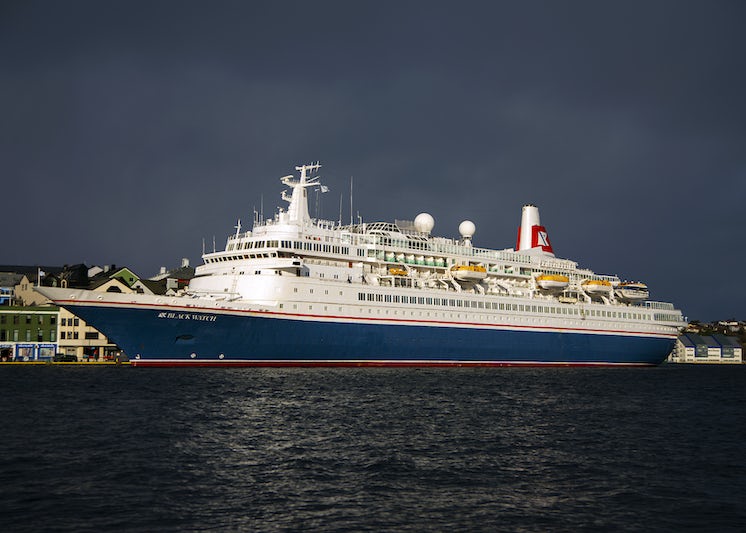 First time with Fred Olsen and got a great saver deal. Sailing from Dover was so easy with excellent parking arrangements at the port and easy embarkation. This smaller ship is has a very friendly crew and staff. Excellent shows and entertainers in the bars and loung areas. Drinks and spa treatments are a reasonable price - much better than any other cruise line I have been with. Five course ...
Read More

A wonderful surprise and magnificent cruise.

Most pleasant cruise to date. My husband and I have just returned from a cruise to the Norwegian Fjords with Fred Olsen. In a nutshell, it was a joy from start to finish. The organisation getting everyone on the Balmoral was fantastic, and getting off was so simple. Many people have a fear of larger ships. The Balmoral accommodates 1400 passengers. But at no time did we feel crowded. There was ...
Read More

Once upon a time I was working at a shipping agency in a South American port, when a brand-new ship come into port. It was the Crown Odyssey, which belonged to the Royal Cruise Line and we were appointed agents for four calls during February and March 1989. The ship impressed even the experienced pilots by its easy manoeuvrability. Visitors and passengers were also impressed by the then ...
Read More

On Saturday 30th April my partner and I travelled with Fred Olsen on Balmoral to Norway. My partner and I are in our early 20's, so much younger than most travellers. We found that the design of Balmoral was quite dated and feel that it could do with a make-over, new carpets, chairs etc. but no problems with the facilities so we couldn't complain. We arrived at Dover at 12pm (the times given ...
Read More

My partner saw the cruise advertised as a last minute deal via Iglu so it was booked on the Monday and we sailed the following Sunday. I have to say that both Iglu and Fred Olsen were brilliant. My other half had a 'significant' birthday on the Wednesday of the cruise and I told Fred. I thought I could maybe sort out a cake but I discussed it with the company and a very helpful young lady called ...
Read More

We chose this cruise because of the convenience of a Newcastle departure,we live in the north of England and wanted to avoid flying. Check in was easy and boarding was well organised. We had a cabin in the forward section on the 4th deck,lots of storage and kept nice and clean by housekeeping. When we sailed away the sun was shining and temperatures made us feel as if in the med ,not ...
Read More

Review for Balmoral to Canary Islands

I boarded the ship at Doper which is the most convenient cruise port for me. I parked my car in the port which efficiently organised. After check-in I boarded immediately and my luggage followed only a few minutes after. It was one of the quickest start to a cruise I have experienced and I have taken 40+ cruises. Our cruise took us to three of the islands in the Azores, Madeira, Lisbon and ...
Read More

Embarkation went smoothly. Entertainment team good. Meals in main restaurant good. Palms cafe under staffed and food ok. At times very unclear where soup, gravy was being served and under staffed, no clear direction. The lounge areas I felt were under staffed, on several occasions after waiting to be served then had to wait up to 15 mins or more for our drinks, which necessitated me having to ...
Read More

Overall a good cruise, but we will not be tempted to sail anywhere from Dover in the future! It's access and the lack of decent hotels and taxis in the area is an absolute nightmare. As we were travelling down by train the day before the cruise we wanted a hotel in Dover, and we booked a sea view room at the Best Western as it was the only way we could be assured that we would not have a trail of ...
Read More

A good four star cruise to some unusual ports.

Cabin 7020 is a large cabin that has been created by joining two cabins. Cabin 7022 is missing from the deck plan. Though big there is a lot of waste space. The cabin that would be the original 7020 has no window but an angled outer wall leaving a recess that is unfurnished and of no use. Though there was a lot of space to use the design is unimaginative and the bathroom that juts into the ...
Read More